The rivalry between the Dallas Cowboys and Green Bay Packers goes back many decades. The Packers won the first two Super Bowls after defeating the Cowboys in the 1966 and 1967 (The Ice Bowl) NFL Championship Games. In the 90s, the “Triplets” battled Hall of Famer Brett Favre in the playoffs several times, and successfully, as they won three Super Bowls in a four-year span. In the last decade, the Packers have seized control of this rivalry, winning the last two and seven of the last eight, including three straight wins in Dallas. The Packers have caused plenty of sleepless nights for the Cowboys recently, and if they ever want to get back to the top of the NFC, they have the solve the Green Bay puzzle. 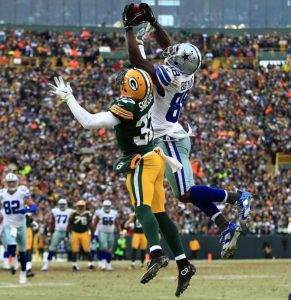 Let’s go to the 2014 NFL Playoffs, or should I say the infamous “Dez Caught It” game. The Cowboys and Packers both went 12-4 that year finishing as the two and three seeds in the NFC respectively. With just over nine minutes left in the fourth quarter, the Packers held a 26-21 lead. The Cowboys faced a 4th and 2 at the Packers 32 when Tony Romo connected with Dez Bryant for a 31 yard gain down to the one. Unfortunately, for the Cowboys, an obvious catch was reversed and the Packers took over, and the Cowboys season ended in heartbreaking fashion. 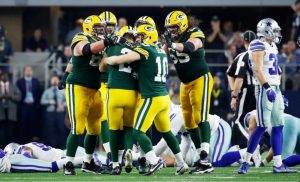 2016 saw then rookies Dak Prescott and Ezekiel Elliott get their first taste of this rivalry. They both shined in their first and only trip so far in their careers to Lambeau Field in a Week 6 matchup. Prescott went 18 of 27 for 247 yards and 3 touchdowns. Elliott wasn’t to be outdone as he had his second-best rushing performance to date with 157 yards on 28 carries, and the Cowboys won easily 30-16.

This set up another playoff matchup between the two just three months later in Arlington. The Packers jumped out to a commanding 21-3 lead in the first half as the home crowd watched in disbelief. However, a Dez Bryant touchdown and a Dan Bailey field goal just before halftime cut it to 21-13 and gave the Cowboys some momentum to start the second half.

Late in the fourth quarter, the Prescott found Bryant for another touchdown, and after his two-point conversion, the Cowboys and Packers were tied at 28. After an exchange of field goals, the Packers got the ball with 58 seconds left. On a 3rd and 20 from his own 32, Aaron Rodgers found Tight End Jared Cook on the sideline for a 35 yard gain that was upheld after a booth review. Kicker Mason Crosby then put the final nail in the coffin with a 51-yard field goal as time expired, ending the Cowboys season once again, and their high hopes for a sixth Lombardi trophy. 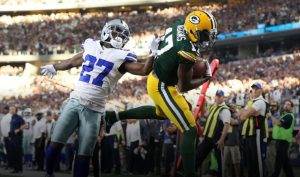 2017 saw yet another game between these two legendary franchises go down to the wire. The Cowboys started fast and jumped out to a 21-6 lead in the first half. The Packers didn’t go away quietly, though, as they took a 28-24 lead in the fourth after a Damarious Randall interception return for a touchdown. Prescott would then cap off a 17 play 79-yard drive with a touchdown run as the Cowboys took a 31-28 lead with 1:13 left in the game, but unfortunately, it was too much time left for Rodgers.

He then snatched the heart right out of the Cowboy’s chest once again, as he engineered a 9 play 75-yard drive that ended with a touchdown to Davante Adams with 11 seconds left, and the Packers won 35-31 as fans in Jerry World were stunned and speechless once again.

Over the last five years, the Packers have caused enough heartache and pain for the Cowboys and their fans to last a lifetime. This Sunday’s matchup is critical for a few reasons. First of all, they are coming off of a tough loss in New Orleans to the Saints and you don’t want that to start a pattern, especially with their lead in the NFC East down to just one game. Also, at some point, you have to wonder if the Cowboys lose again to the Packers will they become defeated psychologically against this team.

As it stands right now, the all-time series between these two is extremely close as the Packers hold a slight 19-17 (15-13 in the regular season, 4-4 in the playoffs) edge over the Cowboys.

This team always seems to have the Packers in their way recently, and they haven’t been able to rise to the occasion when called upon. This Sunday the Cowboys can not afford to let that happen again as they look to keep their NFC East rivals in the rearview. A physical and mental test of the highest order is up next. Needless to say, things are getting real in Dallas.