If there's one thing the Dallas Cowboys don't lack its veteran star power. Names like Dak Prescott, Ezekiel Elliott, DeMarcus Lawrence, and Aldon Smith keep that ever so bright spotlight on America's Team.

The 2020 season has brought a little something different to the Cowboys. An infusion of young talent from the NFL Draft has been at the forefront of the team's success this season, even though there hasn't been a lot to get excited about, at least not consistently. Nonetheless, these building blocks for the future have gotten much-needed experience during their rookie campaigns. 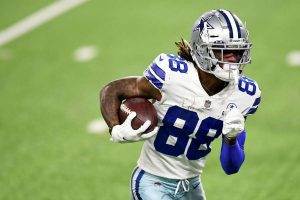 The Cowboys needed a slot receiver once veteran Randall Cobb went to the Houston Texans in free agency, and they didn't waste time filling the need. CeeDee Lamb, regarded by most as the best receiver in the draft, fell to the Cowboys at 17 and their offense immediately went to another level.

Lamb has played in all 14 games (12 starts) and he's made them all count. He's registered 66 receptions (franchise rookie record) for 827 yards and four touchdowns, ranking second on the team in each category to Amari Cooper. His two 100-yard performances are the most ever by a rookie in team history and became the first receiver ever to catch at least five passes in each of his first six games in the NFL. Also, he's just 177 yards shy of breaking the franchise's rookie receiving record (1,003) set by Bob Hayes in 1965.

The fact that he's played two-thirds of the season without Prescott makes his production even more impressive. 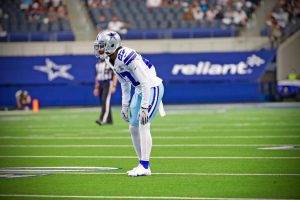 After adding Lamb to give the offense a three-headed monster at wide receiver the Cowboys selected Trevon Diggs 51st overall to be the team's new CB1 after the departure of Byron Jones. Diggs struggled at the beginning, which is not uncommon for cornerbacks when transitioning to the NFL level, but he's come into his own as of late.

Before suffering a broken foot that forced him to miss four games, Diggs had a five-game stretch that displayed the ball skills that made him a first-round pick in a lot of people's eyes. From Week 5 through Week 9, Diggs racked up eight pass defections and two interceptions. For the season, he has 53 tackles and 11 passes defended in 10 games (9 starts). Needless to say, he's proving to be an excellent draft choice. 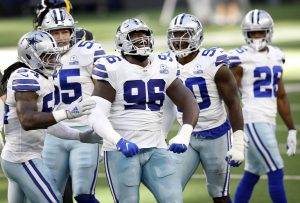 The Cowboys have been trying to get the defensive tackle position right for quite some time now. They seemingly thought they did with the additions of Gerald McCoy and Dontari Poe during free agency. Unfortunately, McCoy suffered a ruptured quadriceps and was released in August, and Poe was waived in October due to poor performance and weight issues. This set up rookie Neville Gallimore to take on a bigger role, and he's delivered.

His rare combination of speed and power was on full display in Week 9 against the Pittsburgh Steelers when he was one of the highest-graded interior defensive linemen in terms of run defense grade, run stops, and run stop percentage according to Pro Football Focus. Last Sunday against the San Francisco 49ers, he had arguably his best game of the season which was highlighted by two incredible plays against both the run and the pass.

He's started seven of the last eight games and is setting the foundation to be a permanent starter next season. 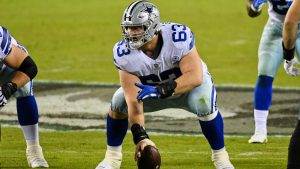 When Travis Frederick announced his retirement in March it left a huge hole on the Cowboys offensive line. In the fourth round of the NFL Draft, they selected another center from Frederick's old college stomping grounds at Wisconsin in Tyler Biadasz. He started the season behind veteran Joe Looney, but after he suffered an MCL sprain in Week 4, Biadasz got his shot to show his value.

Biadasz would start the next four games against some very stout defensive fronts but the former Badger rose to the occasion. His combination of power and technique got him selected to PFF's mid-season All-Rookie team. Unfortunately, his momentum got derailed by a hamstring injury in Week 9 and he hasn't made a start since. However, he's laid the groundwork to be the Cowboys starting center for the foreseeable future.

Cornerback Reggie Robinson and edge rusher Bradlee Anae haven't faired as well as their rookie classmates. With only six defensive snaps between them, they've contributed mostly on special teams. Quarterback Ben DiNucci made one start in place of Prescott in Week 8 but only threw for a pedestrian 180 yards.

Even amid a disappointing season, the Cowboys have found several starters for years to come in this rookie class.

Matthew Lenixhttps://mlenixsctx.wordpress.com/
I write dope stuff about the Dallas Cowboys and what not.
Previous article
Report: DT Antwaun Woods Heading to Injured Reserve
Next article
It’s Not How We Expected, But The Cowboys, Eagles Fight For Their Playoff Lives This Sunday

I think the entire team decided to take a...
NFL Draft

Wide Receiver CeeDee Lamb is a well-known player in Dallas, having a history of making great grabs and catches as a Dallas Cowboy. It's...
Read more

Agree Matthew, we have some good young players that are bright spots in a difficult season, that will hopefully help build a good foundation moving forward.

I still think Reggie Robinson and Bradley Anae should’ve gotten more playing time than what they did!! It’s not like it would have made our defense any worse!! I can kinda understand not playing Bradley Anae as much since we already have so many edge rushers playing this season, but there were times we were playing corners off the streets and from the AAF and XFL…. I think those opportunities should’ve been given to Reggie Robinson!!