It will be a few weeks before new Cowboys receiver Tavon Austin can make a big impression on Dallas fans. But apparently he’s already done that with team owner Jerry Jones, who went so far as to compare Austin to the biggest legend in Cowboys WR history.

According to Rob Phillips of DallasCowboys.com, Jones said the following about Tavon after a recent practice: 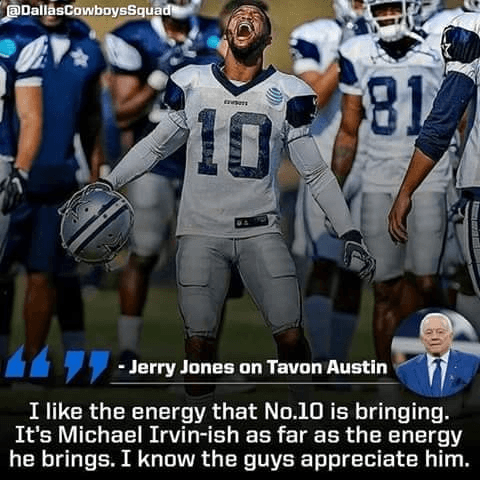 Considering that Michael Irvin’s energy and leadership were an integral part of the 1990s Super Bowl teams, that’s high praise. And given recent developments on the Cowboys offense, that sort of leadership is needed.

Say what you want about their declining performance, but Jason Witten and Dez Bryant were huge voices in the locker room. Their departures left a void of veteran leadership that, hopefully, Tavon Austin is helping to fill.

Personality is great, but a player also has to stand out on the field. Tavon’s never been to a Pro Bowl and was almost a non-factor on the Rams last season. He won’t keep his teammates’ attention long if he’s not backing it up with his play.

Michael Irvin’s nickname was “The Playmaker.” His performance justified his loud voice in the locker room.

Nobody expects Tavon Austin to be the Cowboys leading receiver in 2018, or even in the top three, but he will need to maximize his opportunities on offense and on special teams. He may not get close to the 907 combined yards and nine touchdowns he had as a Ram in 2015, but he still needs to be consistent and do the most with what he’s given.

No, Austin’s name won’t ever be in the Ring of Honor with Michael Irvin’s. But playing in his sixth season, Tavon has more experience than a lot of players on this young Cowboys roster. He’s seen the highs of being an eight overall draft pick and the lows of being traded for peanuts for by his former team.

Hopefully, all of that has made him a voice of wisdom and encouragement for his new teammates. If so, Tavon Austin is an asset to this Dallas offense.