Pro Football Focus (PFF) recently encouraged NFL fans to create the perfect wide receiver by choosing a combination of traits (hands, speed, route running, contested catch) from current players. As you can imagine, it created quite the debate.

I don't really think there is any right or wrong answers to creating the perfect wide receiver from the candidates above. I think it's merely a personal preference type of thing. For the record, I'd go with Michael Thomas (hands), Tyree Hill (speed), Stefon Diggs (route running), DeAndre Hopkins (contested catch).

You can agree or disagree with my picks for the PFF perfect wide receiver challenge, but that's a discussion for another time. Today, I thought we'd tweak this challenge a bit and make it more Dallas Cowboys oriented.

Here's how the challenge will work:

Using the PFF format, use the combined traits (hands, speed, route running, contested catch) from past and present Dallas Cowboys wide receivers to try and create the perfect WR. Below is what I came up with…

I racked my brain trying to figure out exactly which Dallas Cowboys wide receiver to go with in this category. In the end though, Cole Beasley won out. No he's not the biggest or fastest WR to ever wear the star, but I do believe he had some of the best hands. He's been one of the most reliable receivers in recent memory with the Cowboys and had an impressive 70.9% catch rate in his seven years in Dallas.

When I think of Dallas Cowboys wide receivers with speed, I think of only one person… Bob “Bullet” Hayes. He is the only player in the history of the NFL to win an Olympic gold medal, a Super Bowl, and be enshrined in the Hall of Fame (2009). He was once considered the “world's fastest human” by virtue of the many world records he held. Adding Hayes' speed to Beasley's hands is a great start in creating my perfect Cowboys WR.

Beasley's hands, Hayes' speed, and Amari Cooper's route running skills? Yep, that's what I'm going with. Cooper is one of the best route runners in the game right now and I'm not sure if there's another former Cowboys WR I may be overlooking who can match him. It doesn't matter if he's lining up outside or playing out of the slot, his route running skills allow him to easily create separation from anywhere on the field.

With Beasley's hands, Hayes' speed, and Cooper's route running skills my perfect Dallas Cowboys WR is nearly complete. The only thing left is to determine who to choose for contested catches? I first thought of Michael Irvin, but ultimately decided on another No. 88… Dez Bryant. Bryant's ability to twist and contort his body when going up to pluck the ball out of the air was his calling card in the NFL. I'd go as far as saying he's one of the best ever in contested catch situations.

Well there you have it… What would you do differently?

Drew Pearson was called Mr Clutch for a reason. Best hands for Drew. 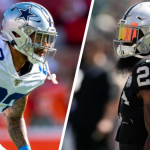 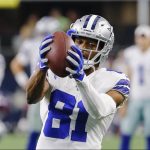