There wasn't a whole lot to like about the performance the Dallas Cowboys gave on Sunday vs the Green Bay Packers. It was a game that was marred by the Cowboys shooting themselves in the foot several times throughout the first half that allowed it to get out of hand. At one point the Green Bay Packers got up 31-3. It was that bad.

Then the fourth play of that drive had Dak Prescott fake the run to Ezekiel Elliott and drop back with plenty of time to find Amari Cooper deep down the field. It wasn't a perfect ball but it was in the window and Cooper got two hands on it before deflecting it in the air for Jaire Alexander to intercept at the Green Bay 16 yard line. He should have made that catch, but he didn't, and it was a huge play that had a 14 point swing, killing the Cowboys from the jump.

From that point until late in the third quarter, the Dallas Cowboys struggled to find any consistency on offense.

Then when the Packers went up 31-3, the Dallas Cowboys then began to erupt. They outscored the Packers 24-3, and Dak had the Cowboys in a position to kick a field goal that would have made it a one-score game. Brett Maher missed the kick (his second miss of the game).

From the 3:34 mar of the third quarter through the end of the game, the Dallas Cowboys offense was excellent and Dak Prescott in particular. Though three interceptions will be credited to his ledger, only one of those was truly a Dak Prescott mistake. The Amari Cooper drop-pick on their first drive was huge. Later in the game, the officials missed some egregious illegal contact on the defensive back covering Michael Gallup as he's literally slapping him in the head as Gallup is attempting to work his way upfield. That completely messed up the timing of the route and the play and it's not surprising that it was a negative play for the Dallas Cowboys.

I would have liked Prescott to be better at other times in the first half, but his second-half performance, to bring them back and make it a close game was impressive.

In setting a career-high in passing yards, Prescott showed poise, toughness, and leadership in bringing them back to make it a game in the fourth quarter. Prescott was on target on several downfield throws and made the throws to keep the Cowboys ahead of the chains in their attempt at an epic comeback.

On the day, Prescott was 27 of 44 for 463 yards, two touchdowns, and three interceptions. According to Pro Football Focus, the Dallas Cowboys had four drops and Prescott threw away two passes, which turns a 61.4% completion percentage into a 71% adjusted completion percentage. Of his 463 yards, 329 of them came in the second half. That's 71% of his passing yards. It was certainly a tale of two halves for Dak Prescott and the offense. 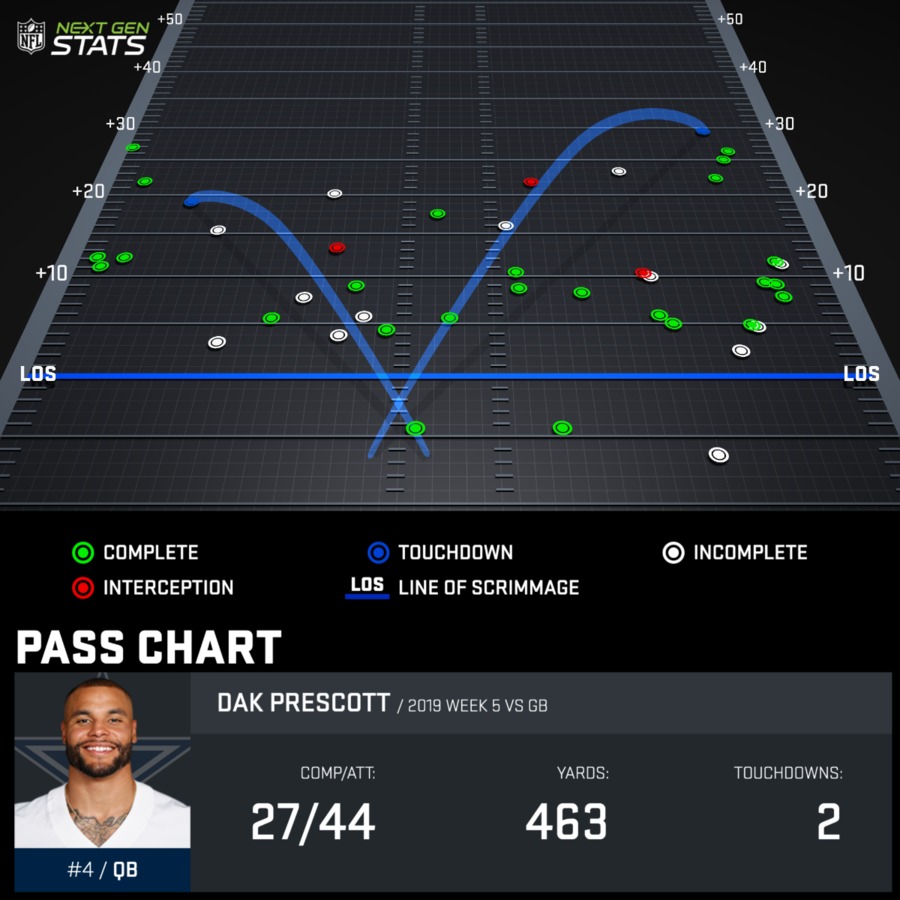 In averaging 10.8 yards per attempt, Prescott is now averaging 9.4 yards per attempt on the season. Though he's had some moments that weren't great, Prescott is playing really good football for the Dallas Cowboys. Sunday against the Green Bay Packers is just further evidence that the Dallas Cowboys can put the offense on his back and he'll reward them.

Despite losing in week five with their record falling to 3-2 and into a tie with the Philadelphia Eagles atop the NFC East, Dak Prescott continues to shine for the Dallas Cowboys. Are there things that could get better for Dak and the offense? Sure, but he's playing really good football right now and should have Cowboys fans feeling good about the rest of the season.

John Williamshttps://anchor.fm/inside-the-cowboys
Dallas Cowboys optimist bringing factual, reasonable takes to Cowboys Nation and the NFL Community. I wasn't always a Cowboys fan, but I got here as quick as I could. Make sure you check out the Inside The Cowboys Podcast featuring John Williams and other analysts following America's Team.
Previous article
Cowboys vs Packers: Sifting Through the Negative to Find the Positive
Next article
Takeaway Tuesday: OT Brandon Knight Had a Promising Debut

Are you serious? Dak was brutal on Sunday. Cooper should have made the catch on the 1st Int but, the ball was behind him. The second Int was a poor read by Dak. The 3rd should have been called defensive PI but, Dak threw it trying to get the flag. He also had a horrible pick in the endzone on 1st down no less but, Green Bay committed a penalty. I’m a big Dak supporter however, Sunday he was not good. Do yourself a favor and don’t try to make Porterhouse out of hamburg.

If the offensive and defensive lines don’t get their acts together it is going to be a long season again.

What game were you watching. Dak is not the only reason we lost the game but is definitely the biggest reason. His reads and throws were terrible. He looked like the Dak of old. Then you add the fact that you have one of the best if not the best rb in the league and he has 12 carries for the game. Terrible playcalling.