The Dallas Cowboys will have a lot of decisions to make regarding their roster in 2020. Out of their 25 free agents, 15 are will be unrestricted once March comes about, including three at the wide receiver position. Amari Cooper will be the main focus when it comes to free agents once Quarterback Dak Prescott’s inevitable long-term extension gets done. Tavon Austin was a disappointment in 2019. Lastly, there’s veteran Randall Cobb, who was more than solid as a third option after signing a one-year deal last March.

Cobb was brought in as an upgrade to former Cowboys receiver Cole Beasley, who signed with the Buffalo Bills during last year’s free agency wave. Playing alongside two 1,000-yard receivers, Cooper and Michael Gallup, Cobb proved how valuable he was in the slot. He caught 55 passes for 828 yards on 83 targets (66.2%) and scored three touchdowns. 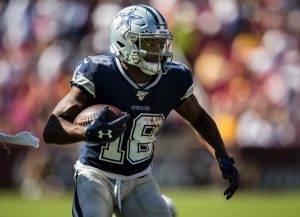 Prescott is coming off a career year with 4,902 yards (2nd in NFL) and 30 touchdowns (4th in NFL). When speaking with USA Today Sports on Thursday, Prescott talked about the advantage of having Randall Cobb back in 2020.

“I’m sure it’d be so beneficial,” Prescott said. “If he stays and he’s around, which obviously I won’t, he can be an instrument for me to help and to maybe go to and say, ‘Hey, what are we trying to go here? I know what y’all did in Green Bay, and I know what we did here, but where’s that medium? Where can we meet?’

“So that’s interesting you say that.”

The hiring of former Packers coach Mike McCarthy earlier this month could also play a big part in Cobb returning. He coached Cobb for eight years in Green Bay, including his only Pro Bowl season in 2014. At his introductory press conference, McCarthy said it was good to see a “smiling Randall Cobb” in attendance, per Patrik Walker of CBS Sports.

Mike McCarthy says it's great to see a "smiling Randall Cobb" at the press conference, as he leads with explaining by family and football is a deal deal (combo) to him.

In addition to Prescott and McCarthy, Owner Jerry Jones doesn’t seem to want Cobb to go anywhere either. After McCarthy was introduced, Jones grabbed Cobb and said: “I didn’t want you to get homesick around here.”

That tells me that there are plenty of people in the building that want to see Cobb return, as they should. In addition to being one of the better slot receivers in the league, Cobb can also lineup outside which allows the Cowboys to move their number one option Cooper around. Also, it can get Tony Pollard on the field to contribute to the passing game seeing as he can be effective in the slot as well.

With the Cowboys looking at around 100 million in cap space for 2020, bringing Cobb back wouldn’t take much of a financial commitment, especially with him entering his 10th season. It’ll be interesting to see if all the factors mentioned will be enough to re-sign Cobb.