Andy Dalton didn't have as much success as he'd have liked in nine seasons with the Cincinnati Bengals. But today, playing in Paul Brown Stadium for the first time with visiting team, he was a winner as the Dallas Cowboys posted a 30-7 victory in Week 14.

There was no Goliath in this late-season matchup; Dallas entered the game with just three wins and Cincinnati with two. Some might even argue that the outcome works more in the Bengals' favor when it comes to draft positioning.

But the Dalton and the Cowboys don't appear to be tanking. The 10th-year veteran threw for two touchdowns and posted a 122.6 passer rating as Dallas posted their biggest margin of victory of 2020. Their previous wins had all by just three points or less.

The Cowboys were up 17-7 at halftime thanks to three lost fumbles by the Bengals. One of those was returned by Aldon Smith for a touchdown and the others set up Dallas for scores.

Outside of the turnovers Cincinnati was doing okay offensively. They posted 196 yards of offense in the first half exploiting the same soft defense we've seen from Dallas most of the year. To their credit, the Cowboys tightened up in the second half and only allowed 113 yards while keeping the Bengals off the scoreboard.

This win may not matter much if the season continues as expected. However, with the Giants losing today in Arizona and Washington yet to play their game at San Francisco, maybe the NFC East will become a little more winnable by the end of the day. 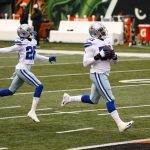 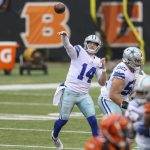