The 2019 season is going according to plan so far for the Dallas Cowboys. They currently sit atop the NFC East at 3-0 lead by the stellar play of Dak Prescott and Ezekiel Elliott who is off to the best three-game start of his career. This Sunday, they head to New Orleans to face the Saints in primetime on Sunday Night Football. Even without Drew Brees, this is a formidable team with explosive weapons. With the Philadelphia Eagles victory over the Green Bay Packers Thursday night the Cowboys have added motivation to keep a two-game lead over their division rival. Here are 3 keys that could make that happen. 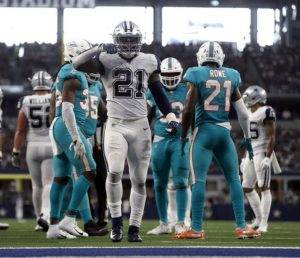 After a slow start in week one, Ezekiel Elliott is back to moving the chains and racking up big yardage as we’ve come to expect from him. It’s been said time and time again, two things travel on the road, your defense and your running game. The Superdome in New Orleans can be as hostile of an environment as there is in the NFL. Taking the crowd out of the game early by establishing the run and moving the chains is key for the Cowboys.

Luckily, the Cowboys also have rookie Tony Pollard to mix in with Elliott. The more the Cowboys can keep the Saints high powered offense on the sidelines and wear out their defense the better their chances of victory. The run game will be critical in that capacity. 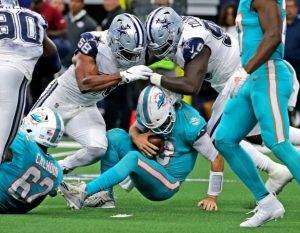 The pass rush hasn’t consistently performed at a high level yet this season. They only have 5 sacks so far in the first three games, however, 3 of them came last week against the Dolphins, due in large part to the debut of Robert Quinn. His seven pressures made life difficult for Josh Rosen as the potential duo of himself and DeMarcus Lawrence flashed what they were capable of as each recorded a sack.

Now that teams have to account for Quinn, it makes it harder to double team Lawrence and also leaves their interior linemen in more one-on-one situations. It will be key to keep Teddy Bridgewater rattled Sunday and not allow him to gain confidence spreading the ball around to their many weapons. 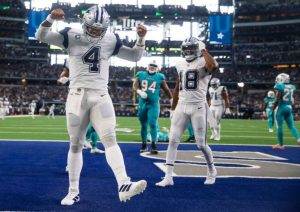 You can argue Prescott is playing the quarterback position as well as anyone right now. In the first three games, he’s thrown 9 touchdowns to just 2 interceptions, completed almost 75% of his passes, leads all quarterbacks with a QBR of 94, and has a passer rating of 128.  His chemistry with Amari Cooper is at an all-time high as they have hooked up for 4 touchdowns already this season. His timing with Michael Gallup was taking off until he suffered a torn meniscus in week two that will keep him sidelined for a while. Even “Ole Reliable” as he’s called Jason Witten has scored a few touchdowns in his return from retirement.

The Cowboys should continue to let Elliott and Pollard set up the play-action pass game, which Prescott has excelled at this season. He is currently 30 of 37 (81%) for 409 yards on play-action passes in the first three games, top-notch execution. Throw the ball on first down to keep the Saints defense honest. Also, don’t be predictable handing the ball to Elliott to start every set of downs. This will keep Prescott’s confidence high and the Cowboys offense productive.

There are no easy wins in the NFL so it’s paramount that the Cowboys come into New Orleans focused even with future Hall of Famer Drew Brees on the sidelines. Establishing Elliott and the running game, keeping immense pressure on Bridgewater and continuing to let Prescott flourish will be key in the Cowboys getting to 4-0 and keeping their cushion in the NFC East.