The Dallas Cowboys are taking on the New York Giants this Sunday. The Cowboys are 10.5-point favorites, and the over/under is at 44.5. It probably won't be an exhilarating game if we're being honest. So, let's make it more fun by talking about DraftKings and this game's showdown slate.

WR CeeDee Lamb ($15,800) – The Cowboy's offense is struggling, but CeeDee Lamb is still producing. He has seen 23 targets in the last two games and has 14 receptions. The Giants are the 23rd ranked team in DraftKings points allowed to wide receivers. The Giants may also be without cornerback Adoree' Jackson, which would be helpful for Lamb.

New York has allowed the eight most receiving touchdowns this season. Lamb has not scored since week ten, but this looks like a friendly match-up to return to the endzone. Lamb scored in the first contest this season against the Giants.

QB Dak Prescott ($10,800) – Dak Prescott has been in a slump lately. He's scored fewer than 13 DraftKings points in three of the last four games. The Giants also surrender the eight fewest yards per attempt in the league. Prescott did tear apart this New York defense in week five, though, with 300 plus yards and three touchdowns.

Although the Giants have a good secondary, they are still in the league's bottom half in DraftKings points allowed to the quarterback position.

The Cowboys' running game has been non-existent with a banged-up Ezekiel Elliott, and Tony Pollard is questionable to play. It wouldn't be a surprise if the Cowboys are conservative with the running back touches, and the points must come from somewhere, so Dak will undoubtedly get his opportunities.

Prescott has 39 or more pass attempts in four straight games, and it's only a matter of time before this offense gets back on track. Don't leave Prescott on the pine, kicking yourself when he comes back to life.

RB Saquon Barkley ($8,400) – Saquon Barkley has had a forgettable season. He is averaging less than 4 yards per carry and isn't even the leading rusher on the Giants. However, he is coming off his best game of the season in terms of running the ball. With Mike Glennon likely to start for New York, the Giants could lean on Barkley to try and keep the game close.

Barkley has also been involved in the passing game as of late, with 23 targets in the last four games and 19 receptions. The Cowboys pass rush has been ferocious lately, so a bunch of check-downs to Barkley is highly likely.

Barkley will probably not explode in this match-up, as the Cowboys are the fourth-best team in terms of DraftKings points allowed to running backs, but if the Giants have any chance to win, he will be involved early and often.

WR Sterling Shepard ($5,000) – Sterling Shepard is potentially the Giants' best wide receiver. Although he has only played in six games this season due to injury, and he missed the first game between these two teams. He is coming off a game in which he only had two catches on four targets, but at a price of only 5k, his price tag is hard to pass up.

The Cowboys are the 27th ranked team in DraftKings points allowed to wide receivers and are giving up 12.4 yards per reception on the season, which is the second-worst in the NFL.

DEF Dallas Cowboys ($5,600) – The Dallas defense has been playing lights out recently. They have forced eight turnovers in their last two games and have scored 17 or more DraftKings points in three of the previous five games, with two of those games scoring at least 22 points.

The Cowboys' defense is coming off a five-sack game, and they have 13 sacks in their last four games.

The Giants offense is in turmoil averaging only 13.25 points per game in their last four. Mike Glennon has thrown an interception in each of his previous two games and hasn't surpassed a 53% completion percentage in either of those games. Dallas has the potential to dominate this game defensively.

K Greg Zuerlein ($4,200) – Normally, putting in a kicker in your lineup is a risky move. However, the Cowboys simply aren't putting the ball in the endzone. In the last three games, Dallas's offensive red zone efficiency is ranked 31st in the NFL, and they are coming off a game in which they scored one touchdown on six red zone trips.

As a result, Greg Zuerlein has scored ten or more DraftKings points in three of the last four games. He is coming off a game in which he kicked four field goals. In a game with two struggling offenses, rostering a kicker may not be the worst idea. 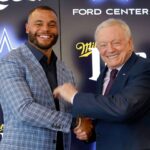 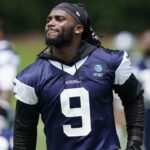