The Dallas Cowboys have been knocked off their perch atop the NFC East division for the first time this season after losing to the Philadelphia Eagles 17-9 Sunday afternoon. As a result, the two teams did a little flip-flopping. The Cowboys go from being in 1st to 2nd in the division and vice versa for the Eagles. Not only that, but it's the Eagles who now hold their own destiny in their hands.

All the Dallas Cowboys had to do Sunday afternoon was to secure a road victory against a beat up Eagles team in order to win the NFC East division and secure a playoff spot. It was yet another embarrassing performance on their part, which has become too commonplace for them this season. Surprisingly though, they are still not completely out of the playoff race.

The Dallas Cowboys can still get into the playoffs if they beat the Washington Redskins next week and if the Philadelphia Eagles lose to the New York Giants. I wouldn't hold my breath on that happening. Even if the Eagles win next week I'm not sure if the Cowboys can do the same. That's a discussion better saved for another time. For now, let's get to this week's edition of The Good, The Bad, and The Ugly.

Was there any good!? Well… I had to dig deep to come up with anything positive about the way the Dallas Cowboys played in Week 16 against the Philadelphia Eagles, but I think I found something. The good for me from yesterday's game had to be Kicker Kai Forbath. He alone kept the Cowboys in the game, which is odd to think about considering how much their kicking game has struggled this season.

Kai Forbath has been a breath of fresh air these past two weeks after taking over the kicking responsibilities from Brett Maher. If not for two kickoffs going out of bounds last week, his time with the Cowboys couldn't have gone more perfectly. He has made all of his field goal attempts, as well as his extra points. If not for his leg Sunday afternoon, the Cowboys loss to the Eagles would've looked much worse than the 17-9 score would suggest.

Since Thanksgiving the Dallas Cowboys have been able to put together one game where they weren't completely embarrassed on the field. That was last week against the Los Angeles Rams, but they returned to their old ways in Week 16 against the Eagles. With that in mind, it's not hard to think of anything to put in this category after the way they played yesterday. I don't know about you, but the bad for me had to be the play of the defense.

The Eagles offense was banged up and shorthanded this week, which should have given the Cowboys defense the upper hand in this matchup. Instead, they let a lot of back up and scrub players, who not too long ago where the practice squad, embarrass them. It's completely mind-boggling to think about how well they played last week against a really talented Rams offense and compare it to this week's performance. It's unacceptable, especially knowing what was on the line.

There were very few offensive players for the Dallas Cowboys who showed up yesterday in Philadelphia. Amari Cooper yet again disappeared in a big game when he was needed the most and the same could be said about the rest of the Cowboys playmakers, except maybe Wide Receiver Michael Gallup. He actually ended up having a good game, but surprisingly, he's also what I'm nominating this week as the ugly.

Michael Gallup turned five catches into 98 yards yesterday and in so doing eclipsed his first 1,000 yard season in the NFL. But the reason he landed in the ugly category this week was the plays he didn't make. He had two opportunities to put points on the board late in the game. The first was a pass that bounced off his hands late in the game, resulting in Kai Forbath's third and final FG of the afternoon. The last was Dallas' last ditch effort at a TD Eagles CB Sidney Jones broke up in the end zone. Catching either one would've turned a good performance into a great one, and quite possibly secured the victory.

What's your good, bad, and ugly from Week 16 for the Dallas Cowboys?

I love your column, and you really hit the high and low points in yesterday’s sad performance by the Boys. I just kept waiting for the engine to turn on, but it kept on stalling out. Whatever the spark the team needs has not been there this season. I love Jason, but he needs a new set of jumper cables!

Thanks for reading! I completely agree with you. The Cowboys just haven’t been able to find their groove this year for whatever reason. They’ve been a flash team at best and have failed to find any consistency. It’s disappointing because it feels like a wasted year because of the talent they have. Like you I like JG, but I believe it’s time for some new blood.

To me the Ugly was Prescott’s inability to hit open receivers. Yes there were some drops, but if he hits Gallup in stride a a few passes or Cooper who was wide open on a couple of plays, it’s a different game. His one big completion to Gallup was under thrown and a great catch was made. If that pass had hit Gallup in stride it’s probably a TD. A lot of passes seem to be either too high or a step behind the receivers and it’s been that way for weeks.

Completely agree on the bad. The defense is just not good. Third string players beating up on us. To me this is a coaching issue. The offense isn’t as much a coaching issue, more of an execution issue.

I started to go with Prescott as the ugly as well, but I thought his accuracy problems were to be expected considering he didn’t really practice all week because of a sprained AC joint. But you’re right, he’s been a little bit off with his throws for a few weeks now.

I totally agree! The whole team has been too inconsistent the entire season! I kept waiting for them,to click but except for the Rams game last week they’ve been off. Too many dropped passes and Dak being off as well put the team in a bind. Yes,Dak was hurting from his shoulder sprain but if you want it bad enough you play through the pain. It’s been a frustrating season that’s thankfully over.

If only the Cowboys season was over though. They can still technically make the playoffs if they win next week and the Eagles lose. It’s entirely possible they sneak in and prolong our agony ha ha. 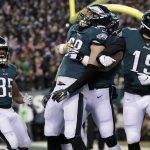 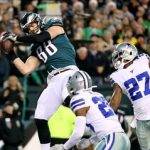