On Sunday Night Football, DeAndre Hopkins, one of the best wide receivers in the country (if not the best), proved to the Dallas Cowboys’ front office and coaching staff exactly why they are wrong about their “#1 wide receiver” philosophy. He did it right there and then, under the lights of NRG Stadium as he handed the visiting team their third loss of the season.

With less than four minutes to go in overtime, sitting at their own 24-yard line, the Houston Texans were ready to take advantage from Jason Garrett’s decision to punt the ball on fourth and one in enemy territory. In a defensive game in which none of the teams had scored more than 16 points, the Texans needed to make a play. And they did.

How did they do it? They threw it to their go-to player and  WR1, DeAndre Hopkins, and let him worry about the rest. The elite pass catcher caught the ball at the 36, left CB Anthony Brown behind, pulled off two consecutive spin moves for a 49-yard gain and eventually, a win at home. 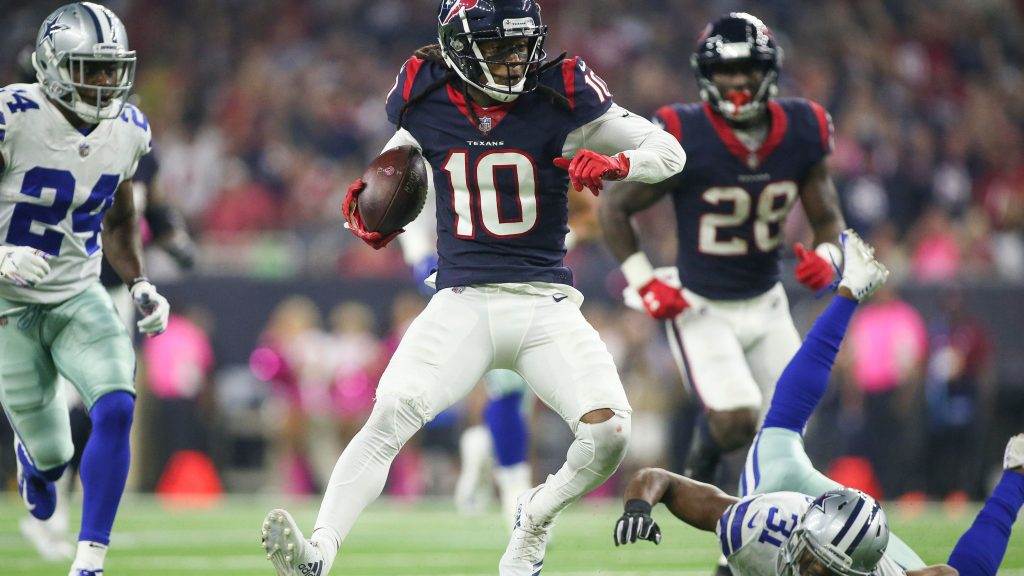 As the Cowboys travel back home to get ready to play the Jacksonville Jaguars, there’s a ton to reflect on. Mainly, how the Dallas Cowboys have approached the wide receiver position. After releasing Dez Bryant earlier in the year, the quest for a #1 receiver has been one of the most discussed topics in Cowboys Nation.

The Cowboys’ coaches and front office talked for months about a “Dak-friendly offense” and Prescott was comfortable saying the team didn’t need such #1 WR. Let me say that I actually believed these words. I had hopes on this team knowing what their identity would be and thought that they’d in fact have a capable offense.

That hasn’t been the case so far, though. And there is not much reason to believe it will change.

There is hope on the rookie, Michael Gallup, to grow as a player and develop into a consistent and reliable weapon but he has only six receptions through five games. It’s impossible to imagine he’ll make the difference for this football team in 2018. Last Sunday, Allen Hurns, Michael Gallup, Cole Beasley and Deonte Thompson combined for 36 receiving yards. That’s your “Dak-friendly offense.”

Now granted, both the quarterback and the receivers are at fault here. There’s way more than one player to blame for this disastrous performances. Prescott’s throws haven’t been good, receivers haven’t helped him and the tight end position is still a very weak one. Coaching is obviously a big issue as well.

As we head into week 6 of the season, many characters in Dallas will be playing or coaching for their jobs. At the very least, the QB position should be under evaluation (especially with the contracts quarterbacks have been getting in the NFL as of late), Jason Garrett and Scott Linehan should be on the hot seat.

#Cowboys Jerry Jones on #Texans having a WR like DeAndre Hopkins: I would love to have No. 1 receivers … You have to get those when the opportunities are there.’ @1053thefan pic.twitter.com/9YI1H6omw3

But looming over their 2-3 record is the decision to not have a true WR1. This is the NFL, a passing league. One in which, even though you have a premium running back, you need a guy you can trust in the passing game. This had already been clear to the Cowboys’ first quarter of the season and became all the more evident thanks to DeAndre Hopkins and a catch that will haunt for quite a while.

Tell me what you think about “DeAndre Hopkins Showed Cowboys Why Their WR1 Philosophy Is Wrong” in the comments below, or tweet me @MauNFL and let’s talk football! If you like football and are looking for a Dallas Cowboys show in Spanish, don’t miss my weekly Facebook Live! show, Primero Cowboys!