It was going to be a tough job to top last year’s draft class, which was defined by one word: value. But after a couple of questionable picks, a few reaches, and a couple of picks with fantastic value, this year’s draft can only be described by one different word: defense.

The Cowboys were criticized for the better part of a year for not focusing the previous draft on defense despite finding starters in CeeDee Lamb, Trevon Diggs, Tyler Biadasz, and Neville Gallimore. This year they listened, focusing almost the entire draft on the defensive side of the ball.

The team double-dipped at cornerback, linebacker, and defensive tackle, giving the impression that new Defensive Coordinator Dan Quinn is going to create as much competition as possible.

Fans went into the draft with the hope of it replicating the same joyous feelings from their 2020 success. Instead the 2021 NFL Draft provided conflicting feelings on some of the selections. In many cases, they hit on major needs but did by passing on more highly regarded players to fill those same needs.

The Dallas Cowboys needed to find quality depth and improvement on defense and the team did just that. In that way, it was a success.

Even though this year’s draft didn’t have the flair that last year’s did, they addressed every need on defense, and then some.

Here’s how the picks graded out.

This selection was polarizing among Cowboys Nation. On the one hand, the team was able to secure a third round selection from the Eagles and still able to get one of the most talented, and highest rated defensive prospects in the draft in a position of need.

On the other hand, the team also grabbed a player with off-the-field allegations. Serious red flags that erased his name off draft boards and made many question the pick. Especially with a player like Rashawn Slater still available.

In any case, the Cowboys desperately needed defense and with Patrick Surtain II and Jaycee Horn off the board, Parsons was the best defensive available. His ability to read plays and use his elite closing speed was enough for the Cowboys to send in the pick, believing the potential rewards outweigh the risks.

Everyone thought the Cowboys would draft a cornerback in round one, but the value wasn’t there at 12 after their top two options were off the board. However, with Kelvin Joseph, they filled their biggest need and were able to fill it with plenty of value.

Kelvin Joseph already has the size that defensive coordinator Dan Quinn likes (6-foot-0, 197-pounds) and was one of the fastest corners in the draft. At his pro day, Joseph ran a 4.34 40-yard dash.

He’s still raw, having only played 15 games in his college career, but is excellent in coverage, staying connected to wide receivers downfield. He won’t turn 21 until November but has all the tools to be a really good starting cornerback in this league.

Osa Odighizuwa is a very talented player despite being a smaller defensive tackle at 6-foot-2, 280-pounds, but is a versatile athlete who won 131 wrestling matches in high school, including three state championships. The question here was the need for a run-stuffing nose tackle to add depth on the line when Odighizuwa is a talented pass-rushing three-technique.

Where he was picked was appropriate for his skills as a pass rusher and incredible strength. He’ll be a welcomed asset in a defensive tackle rotation with Neville Gallimore, Trysten Hill, and Antwaun Woods.

The team needed a pure-nose tackle, a role that Odighizuwa won’t play but otherwise has plenty of upside as a rotational defensive tackle to start off on obvious passing situations.

Chauncey Golston is a good player on the outside who can play on either the left or right side, and even rotate inside at the three-technique. The issue with his selection was he’s a bit of a reach, especially with players like Elijah Molden or Ronnie Perkins still available.

Golston doesn’t play with much bend, but he does play with plenty of power at the point of attack to rush the passer and was one of Iowa’s best overall defenders.

If anything, Golston looks like a prime candidate to fill the Tyrone Crawford role and play all over the defensive line, but with more pressing needs, and other options available, this pick seems like a bit of a reach.

This was without a doubt the biggest question mark of day two of the draft for the Cowboys. Nahshon Wright is a player that was almost certainly a Dan Quinn pick, standing at a daunting 6-4 190-pounds at the cornerback position with plenty of traits to smile at.

For the second year in a row, the Cowboys used one of their mid-round picks to double-dip at the cornerback position. However, with defensive backs like Elijah Molden or Ifeatu Melifonwu still available, the Cowboys instead took a player who’s slender and looks too raw to warrant a third-round pick.

If Dan Quinn can turn Wright into his next oversized project cornerback (i.e. Richard Sherman), then this could become the steal of the draft, but at the moment it looks like a waste of a pick.

Without a doubt, Jabril Cox was the best value pick the Cowboys made all weekend. A long-armed, rangy linebacker with fantastic coverage abilities.

His size (6-foot-3.5 233-pounds) and speed (4.52 40-yard dash) could make him the team’s tight end neutralizer that they have sorely needed, in a division with tight ends like George Kittle and (now) Kyle Pitts, and could play in a number of different defensive looks, playing man or zone.

Even though the team got a very talented linebacker in Micah Parsons, the team had no problem adding another coverage linebacker to play with Keanu Neal who’s on a one-year deal and coming off an injury. This is a perfect move for the present and future.

The Cowboys already took one player with off-the-field issues in Parsons, but his talent outweighed what he was being accused of. In the case of Josh Ball, his accusations of domestic violence bring the pick into question whether his upside was worth it.

There’s no doubt he looks the part, standing at 6-foot-8 308-pounds, and plays with plenty of length, and has been able to hold his own against power and technique-savy edge rushers.

He might be able to compete as the ninth offensive lineman on the team, with potential to start one day but this is another example of the Cowboys taking a player with potential, and seemingly ignoring the glaring red flags.

Simi Fehoko is definitely a fun player and will be a fun project for the Cowboys to mold. He’s 6-4, 227-pounds who ran an unofficial 4.37 40-yard dash at his pro day. Even more impressive is production in a COVID-19 reduced PAC-12 season where he caught 37 passes, 574 yards, and three touchdowns in only six games.

Fehoko has been lauded as a deep-threat receiver, but he also has soft hands and has been a one-sided mismatch for just about any cornerback who tried to cover him. He gives the Cowboys a nice rotational deep threat who can also overpower smaller corners.

In his first season, he’ll likely fall out of favor on the depth chart behind the three starters and Cedrick Wilson, meaning his targets are likely limited. His biggest impact this season will be best used on special teams, covering punts and kicks, but has the potential to be the team’s new deep-threat in 2022 should Michael Gallup leave in free agency.

The Cowboys’ second defensive tackle of the draft is the run-stuffing nose tackle that the team has needed. Quinton Bohamma is the teammate of second-round pick Kelvin Joseph from Kentucky and can be the tackle the team needs to improve the second-worst rush defense from a year ago.

While he’s likely not an every-down defensive tackle, his ability to clog running lanes to slow down running backs can be a huge asset to the team’s speedy linebackers.

At the moment, Bohamma is probably going to be battling players like Antwuan Woods and Brent Urban for snaps, but definitely is a welcomed sight from last year’s defensive tackles who either got hurt or underwhelmed.

It took them long enough but the Cowboys finally drafted a safety. Israel Mukuamu was a second-team All-SEC selection in 2019 and looked like he was going to form one of the SEC’s best secondary’s with Jaycee Horn before a groin injury ended his 2020 season at six games.

Even though he primarily played at cornerback, he has experience at safety and it looks like that’s the plan for how the Cowboys plan to use him.

This is the second draft in a row where the Cowboys took a tall, athletic cornerback with the intention of switching him to safety. If it works out this time, then it was well worth a sixth-round pick. Otherwise, this is another Dan Quinn pick that gives the team plenty of depth in the secondary. 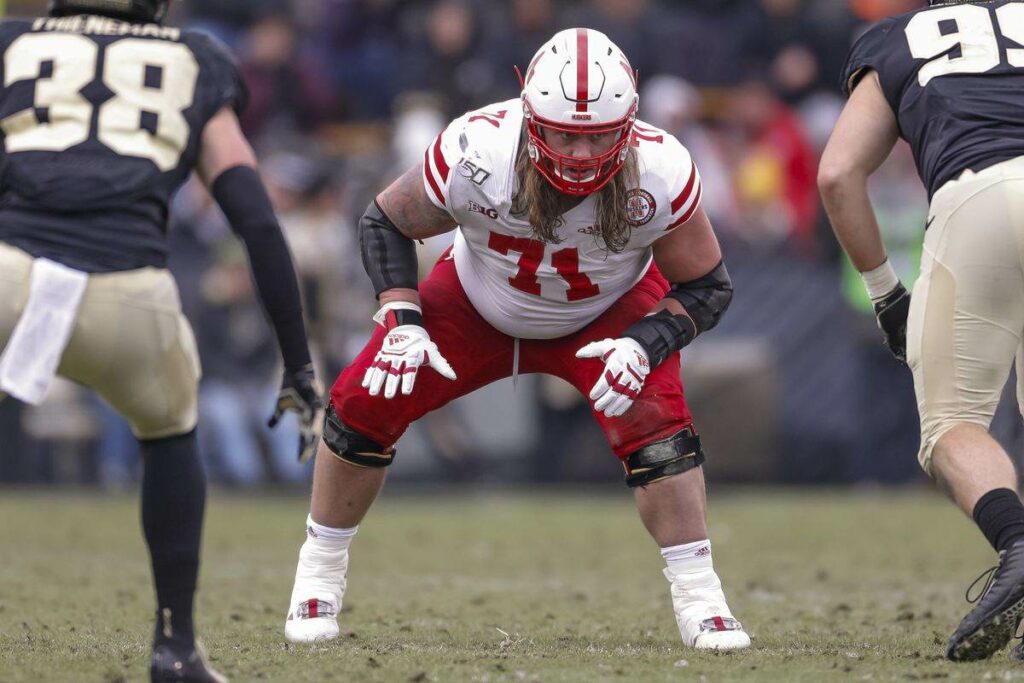 Since this is a seventh-round pick, there’s no such thing as a wasted pick. Matt Farniok played tackle at Nebraska but will likely compete for snaps at guard on an offensive line that was hit hard by injuries.

He’s got plenty of strength and comes in as a refined run-blocker, but doesn’t show the same poise in pass protection. He struggles against quicker edge rushers who are athletic enough to bend and maneuver their way to the passer.

Farnoik might be a camp body to better the competition on the interior of the line, and could potentially be a practice squad player. However, with better players like Ar’Darius Stewart, Marvin Wilson, or Kenny Yeboah available, it would have been better to use the last pick on a player who had a better shot at making the final roster.