There are a total of 101 different types of slot machines, 55 poker tables, and even a bingo hall if that's more your style. Let's look at how the Cowboys partnered with WinStar World Casino and why it was such a great move for both parties.

How the Dallas Cowboys Partnered with WinStar World Casino 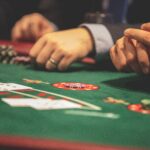 With the announcement of their new collaboration with WinStar World Casino, the Dallas Cowboys became the first NFL club to work with a casino.

Jerry Jones announced the partnership a week after he and other team owners in the league modified the rules to permit teams to accept sponsorships from daily fantasy sports companies and casinos that run sportsbooks.

Jones said at a news conference that the Dallas Cowboys are “very proud” that they have partnered with “the top businesses in the world.”

“It is an honor to stand shoulder to side as partners with such a well-known entertainment brand as WinStar World Casino.”

Jones was assisted in announcing by Jack Parkinson, who is the general manager of WinStar. Jones said that the Cowboys would host various team gatherings at the casino; however, the specifics of these events have not yet been disclosed.

As part of the agreement, the casino will exclusively use the Cowboys' name, logo, and other identifying marks. Given how closely associated the blue and white star has become with the sport of American football, this is a very kind concession to make. It allows the Cowboys to connect with their fans on a deeper level.

We can only hope that with this partnership comes lots of bonuses and free spins. If you've ever enjoyed an online casino bonus from a Norwegian establishment, you should understand the importance of freebies. These companies offer bonuses of over 500 percent! They also offer lots of free spins and welcome discounts for new customers. Winstar might do something similar for Dallas Cowboys fans. Either way, this is a huge step for the Cowboys and sets them apart from other teams in the league. The partnership will help the casino reach a wider audience and give them more exposure.

Why Didn’t This Happen Earlier?

Since its inception, the National Football League has taken a stance against legalizing sports betting, whether in-person or online.

The United States Supreme Court overturned a federal prohibition on sports gambling in May of 2018, opening the door for professional leagues and teams to participate in gambling activities in casinos all over the country.

In August of the same year, the business venture committee of the NFL loosened some of the regulations, which made it possible for Jones to make a contract with WinStar.

What this Means For the Future of the NFL and Gambling

The move is undoubtedly an indication of the changing circumstances in terms of gambling in general and sports betting in particular in the United States. Although it may have been consigned to the NFL's nooks and crannies, the link between the league and the gaming industry has always been there.

This agreement might suggest that the league is beginning to soften its position on gambling, which would be surprising given that they have opposed gambling for many years. This may also be good news for those who like gambling since it may increase the number of casinos that form partnerships with NFL clubs.

This may result in additional casino bonus and free spins being provided to fans, which would be an excellent way to get more people interested in gambling.

When it comes to partnering with a casino, the Dallas Cowboys are ahead of the game. Not only is this partnership groundbreaking, but it also gives the Cowboys an opportunity to increase their revenue stream.

In addition, the casino bonus offered by the partnership will help to attract new fans and create loyalty among existing fans. Though other teams are also following suit, the Dallas Cowboys are leading the pack when it comes to team-casino partnerships.

Star Staffhttps://InsideTheStar.com/
This is the General Staff account for Inside The Star, a blog for Dallas Cowboys news, scores, schedule, rumors, and analysis. We are the official home for @CowboysNation on Twitter. Follow us today for new content updates straight from our timeline. To learn more about our staff, please visit our Staff listing.
Previous article5 Players Waived as Cowboys Meet 85-Man Roster Limit
Next articleMcCarthy Provides Injury Updates & Availability for 3 Key Players

It isn't long after the last piece of confetti falls or the final bottle of champagne is popped before betting sites begin looking ahead...
Read more
Cowboys News

Where Do Cowboys Rank in Super Bowl LV Betting Odds?

We're less than a week removed from an epic Super Bowl LIV won by the Kansas City Chiefs. The Chiefs Kingdom had to endure...
Read more
Cowboys News

Over or Under: 2019 Cowboys Win Totals Set by Sportsbooks

Where will the Dallas Cowboys stand once the 2019 NFL season is over? That's the question Cowboys fans have asked themselves all offseason and...
Read more
Subscribe
Login