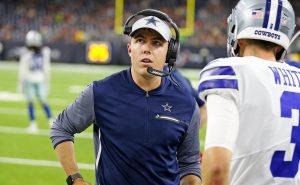 When the offense was flowing, there would be more three wide receiver sets, split backfield and plenty of pre-snap motions. Where the offense fell apart was when the running game couldn’t get going, causing the play calling to become stale. 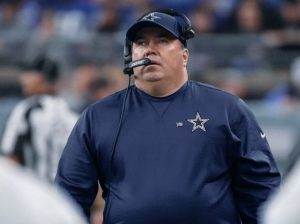 Enter Mike McCarthy. Now instead of continuing, conservative play calls to play to “not lose,” the new offense will have a West Coast feel with an emphasis on the passing game.

This was how it went during McCarthy’s time in Green Bay. Having a quarterback like Aaron Rodgers throwing to receivers like Donald Driver, Greg Jennings, James Jones, Jordy Nelson, Randall Cobb and Davante Adams would obviously yield a lot of results. 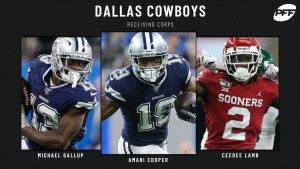 However, Mike’s got more toys to play with in Dallas. He’s never had a running back like Ezekiel Elliott who’s great at running the ball, as well as catching and blocking in the passing game. He’s also never had a receiving trio like Amari Cooper, Michael Gallup and rookie CeeDee Lamb.

It’s a set that we saw more of with Kellen Moore in his first year as the offensive coordinator, more than a base 12 or 13-personnel like they did with Scott Linehan and Jason Garrett calling the offense.

For perspective, a base 11-personnel is the image above. With the Cowboys, that would look like this:

What Moore’s play calling allows Prescott to do is utilize his threat as a runner, and the running backs at his disposal to spread the ball around to his array of weapons. With McCarthy’s offensive scheme, we could see another career year for their franchise quarterback.

In addition to 11 as their base set, not only does McCarthy love to spread the ball down the field but we could see plenty of four wide receiver sets, and even potentially some with five. This would be an almost complete turnaround from what teams have come to expect from Cowboys offenses.

Lastly, it’s important to note from McCarthy’s Packers run that he inherited two years of veteran Brett Farve, while helping to develop Aaron Rodgers for two years. Not only does he not have to deal with an aging quarterback but he also doesn’t need to mold a 22-year-old quarterback out of clay.

He’s getting a young, Pro Bowl quarterback in Dak Prescott who doesn’t come with the ego that Farve reportedly had late in his time in Green Bay. There’s also no sign that Dak has the unwillingness to be coached that Aaron Rodgers has displayed at times.

With Prescott, McCarthy got a mature leader who’s thrived as a passer in one year with Kellen Moore as his offensive coordinator. With these receivers and tight ends, it could be even better than he had at any point in Green Bay. There’s no reason to think otherwise that we couldn’t see this offense elevate even beyond what it did last year.

With all the weapons, the quarterback and the connection between QB and OC, the implementation of Mike McCarthy’s new offense is going to result in ridiculous, even maybe video game-type numbers for the Dallas Cowboys.

Go ahead and get excited.