The Dallas Cowboys got the steal of the 2020 NFL Draft when they selected CeeDee Lamb with the 17th overall pick. In the second round, you can make the case they put on the ski mask again by snagging Trevon Diggs with the 51st pick. The former had nearly 1,000 yards receiving and set multiple records while playing with four different quarterbacks, and the latter led the team in interceptions (3) and pass breakups (14) despite missing four games with a broken foot.

To say they lived up to the hype would be an understatement. However, there's always room for improvement especially after just one year in the NFL.

Lamb and Diggs arrived in Oxnard, California looking to build off of their rookie campaigns and start the road to significant year two jumps in their performance. Both of these talented players see several different opponents in team drills as well as one-on-one action. Although those battles are important in their development as well, it's the matchup between the two that has set the competitive tone for the entire team in training camp.

In what has seemed like an everyday thing in practice, the Cowboy's two most prized draft picks from a year ago have been seen going back and forth making plays against each other. Lamb has used his incredible burst off of the line of scrimmage, excellent route running, and ability to high point the ball to beat Diggs. On the other hand, Diggs has relied on his size, ability to play press-man coverage, and his anticipation skills to win reps against Lamb.

It's truly been an iron sharpening iron situation between Lamb and Diggs. In the videos below, you see both players making plays against the other. Their reps against each other have been intense and this type of competition from two of your young leaders can have a trickle-down effect on the entire team.

Trevon Diggs on the coverage pic.twitter.com/nb7SMSkYg0 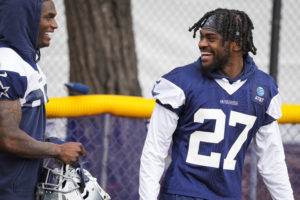 Lamb and Diggs have formed a bond from their battles on the field. The video above where Lamb makes a one-handed catch came after a pass breakup by Diggs. Lamb immediately let Diggs know about his spectacular play.

Not one to back down, Diggs quickly responded.

That's a sign of mutual respect between the two. They recognize how good the other is and how they can make each other better football players. After that practice was over, Lamb spoke about those two specific plays and how he and Diggs expect a lot from one another.

“Yeah, me and T-Diggs, we’re going to compete always,’' Lamb said. “We came in together. We hold each other to a high standard.

“He got me on the first one so I had no choice but to let him hear it a little bit.’'

Diggs also chimed in on the competition between the two and how they push each other daily in practice.

The competition between these two is a beautiful thing to watch! #Lamb #Diggs #Ballers pic.twitter.com/y7a4BvsE6X

Competition brings out the best in any player. Lamb and Diggs are doing their part to make sure the other is ready to go when the season kicks off next month, and they're setting the stage for both to improve vastly off of their rookie success from a year ago.

Matthew Lenixhttps://mlenixsctx.wordpress.com/
I write dope stuff about the Dallas Cowboys and what not.
Previous article
HBO Releases Trailer for “Hard Knocks: The Dallas Cowboys”
Next article
Which Current Cowboys Have Best Shots at Joining the Hall of Fame?