Last season, Jaylon Smith and Leighton Vander Esch established themselves as the best young linebacker duo in the NFL. Smith had a big year with 121 tackles, four sacks, four passes defended, two forced fumbles, two fumble recoveries, and a touchdown. Vander Esch took the league by storm as he racked up 140 tackles, seven passes defended and two interceptions while also garnering All-Pro and Pro Bowl honors as a rookie. Want further evidence of how good they were? Smith and Vander Esch were the only set of teammates that ranked in the top 15 in tackles.

What made the combination of these two so lethal were the splash plays they made. Whether it was Smith laying a bone-chilling hit to Alvin Kamara of the New Orleans Saints, or Vander Esch getting interceptions in Atlanta and Philadelphia, they were both making impactful plays with regularity. So far this season, both are averaging about eight tackles a game, putting them on pace for around 130 for the year. While the numbers look good the game-changing plays from a year ago haven't been there, but they could be coming soon. 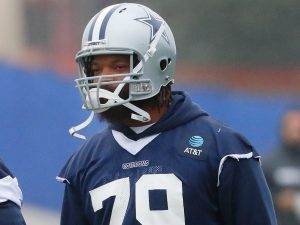 Former Pro Bowl Defensive End Michael Bennett was traded by the New England Patriots to the Dallas Cowboys last week for a seventh-round pick that could turn into a sixth-round pick if certain conditions are met. With his ability to play on the interior as well as on the perimeter the Cowboys defensive front just got that much stronger. Another added bonus is that Bennett played under Defensive Coordinator Kris Richard in Seattle so he's very familiar with his scheme and what's required.

Teaming him inside with Maliek Collins and Antwaun Woods, along with rookie Trysten Hill and Christian Covington, the interior of the defensive line has a lot of depth. The more disruptive they are it will allow All-Pro DeMarcus Lawrence and Robert Quinn to feast on the outside. Also, Bennett can play on the outside opposite Lawrence or Quinn if need be.

How will this help Smith and Vander Esch?

The casual fan probably thinks that the only responsibilities for a defensive lineman are to rush the passer and stop the run, but it goes deeper than that. The more havoc they cause upfront the less likely opposing offensive lineman can reach the second level and get to your linebackers. Then, Smith and Vander Esch will be free to fill gaps against the run. Also, getting constant pressure from your front four allows your linebackers to focus on coverage during passing downs. In the case of the Cowboys, they have utilized Smith to get pressure on the quarterback by blitzing him more, especially with Woods missing time. Now with the addition of Bennett making the defensive line stronger, he won't have to as much, leaving him free to make more plays in the open field.

Smith and Vander Esch haven't jumped off the screen so far in 2019 but that could change shortly. The Cowboys are full of capable bodies along the defensive front and the more they play well going forward it will allow the NFL's best linebacker duo the freedom to make those game-changing plays that we all got used to seeing in 2018.

Matthew Lenixhttps://mlenixsctx.wordpress.com/
I write dope stuff about the Dallas Cowboys and what not.
Previous article
Can Cowboys RBs Do More Damage This Time Against Giants?
Next article
Cowboys Need to be Better vs Leonard Williams This Time Around

The Cowboys signed free agent linebacker Anthony Barr on Wednesday. The door was ajar for Dallas before bringing him in officially, but after James...
Read more
Cowboys News

There's no denying that Leighton Vander Esch has had a disappointing start overall to his NFL career. But based on three key factors, the...
Read more