There was a slim chance that the Cowboys might clinch the NFC East last week if several games went their way. That did not occur, but now it makes things a lot simpler for Week 16 and allows Dallas to control its own destiny in their rematch with Washington.

The big things did go how the Cowboys needed in Week 15; they defeated the Giants and the Eagles took care of the Football Team last night in a delayed game due to COVID-19. But a very specific formula had to be satisfied for Dallas to clinch a strength of victory tiebreaker over Philadelphia, which didn't happen and thus pushed things out for at least one more week.

Now, all the Cowboys have to do is win at home against Washington to become NFC East champions. It will be their first division title since 2018 and will preserve the streak since 2004 of no repeat winners in the division.

But before Dallas and Washington even kick off on Sunday Night Football, the Eagles will host the Giants in an early afternoon game. If Philadelphia loses or even ties New York in that one, the Cowboys will clinch the NFC East before ever even having to play the Football Team.

Even if they've already become division champions, the Cowboys will still be heavily incentivized to win. They're just a game back of Green Bay for the number-one seed in the NFC and will likely need to win out to overtake the Packers and hopefully get ahead of Tampa Bay and its head-to-head tiebreaker.

So yes, it may feel a tad anticlimactic if we find out Dallas has won the NFC East before they even play on Sunday night. But with other postseason goals left to pursue and Washington's own wild card hopes still alive, the game will retain plenty of intrigue.

It’s time for the Cowboys to separate themselves from past Dallas teams. They must take their destiny in their hands and win out to try and get that one game break. If they can do that I think it could just put them over the top and be the linchpin of a Superbowl winning season! The only thing holding back these Cowboys are a mental element. Get over it Cowboys and go bag your trophy!

Agreed, this a very much winnable year for us, the only real threat i see against in the NFC is the Pack everyone else is very beatable

The Bucs lost Godwin for the rest of the year, Fournette is on IR, and Lavonte David is hurt

The Rams have shown greatness at times, but like us, they’ve had some lows as well

The Cards have lost D Hop for the year, and Murray is banged up

And then there’s the Vikings and 49ers projected to get in, though that could change, even if it doesn’t, they’re both really good teams who have identities, but they’re very much limited at QB

Overall, we should have a real shot at winning it all beyond the NFC East, as we should expect, as long as Dak can continue his return to form, and if this D is truly legit

Besides beating the Giants, the Eagles need at most one loss between the Lions, Jets, Rams, Bills, Texans, and Broncos. That’s a tall order. If any two of those teams lose, the Cowboys will clinch the division before Sunday Night Football kicks off.

By the way, having “the Football Team” stand alone in a sentence looks silly. Just say Washington. 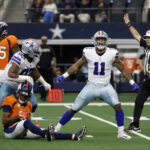 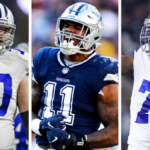