The Dallas Cowboys find themselves facing an interesting situation heading into training camp later this month. They've stockpiled enough talent on the offensive line that now they have multiple players who can play multiple positions. This is better known as “Position Flex” around the Cowboys team facility, and it's highlighted by Connor Williams and rookie Connor McGovern.

Williams was drafted in the second round in 2018 out of Texas. Even though he logged 28 starts at left tackle during his days in Austin, he was brought in to play left guard opposite All-Pro Zack Martin. As a rookie, he started the first eight games before suffering a knee injury Week 10 against the Titans. He struggled due to his smaller size and being a natural tackle, showing he definitely needed to bulk up if he wanted to start on the interior of the offensive line. His back up Xavier Su'a-Filo was serviceable in his absence.

However, he did start two games at right guard in place of Zack Martin and performed pretty decent. This gave him much-needed experience in case of an injury in the future. He's shown he can adjust and be a solid lineman at more than one spot.

When All-Pro Tyron Smith had veterans day off during OTAs, Williams was seen taking snaps at left tackle, his natural position. La'el Collins is the starter at right tackle but is currently in a contract year. Set to be an unrestricted free agent in 2020, and with uncertainty, that he'll perform to the level needed to keep him as the starter or garner a big payday, the Cowboys have some insurance. This could create a situation where Williams is flexed outside if Collins hits the open market next year, only time will tell. 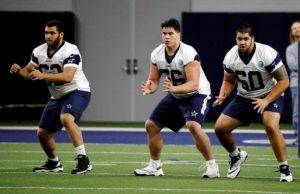 McGovern comes into the NFL with an advantage over his fellow lineman Williams. He was able to gain experience at multiple positions on the offensive line at Penn State. He started 21 games at right guard (9 as a freshman, 12 as a junior) and 14 games at center (13 as a sophomore, 1 as a junior). He's ideal to play on the interior seeing as he is naturally a little bigger than Williams, who had to pack on the pounds this offseason to deal with the responsibility of playing guard.

Now, the Cowboys can really see, if this is their thinking, who the five best guys are on the offensive line. If it were up to me, I would put Williams in direct competition with Collins for the right tackle position. This would allow McGovern to battle Su'a-Filo for the left guard spot. Also, with the health of All-Pro Center Travis Fredrick still up in the air, until the pads come on, McGovern's flexibility has added more insurance along with back up Joe Looney in case there's a setback before the season starts.

Multiple players with the skill set to move across the line if called upon. What more could you ask for as an offensive line coach? Plus, neither will be over the age of 22 during the season. The Cowboys have masterfully built the line of scrimmage on offense through the draft since 2011. Their dedication to dominating the trenches has them loaded with talent in said area. The only thing left is to wait for training camp to see where the chips fall.

Matthew Lenixhttps://mlenixsctx.wordpress.com/
I write dope stuff about the Dallas Cowboys and what not.
Previous article2020 RB Options for the Cowboys if Things Turn Ugly With Ezekiel Elliott
Next articleTony Romo: Cowboys TE Jason Witten Will “Pick Up Right Where He Left Off”

If the Cowboys are going to bounce back in Week 2 they'll have to do it without several key players due to injuries. Dak...
Read more
Cowboys News

Dak Prescott's hand injury is getting all the attention today but QB1 wasn't the only starter knocked out of action last night. Left Guard...
Read more
Game Notes

With Dak Prescott having surgery today on his right thumb, he is expected to miss 6-8 weeks, resulting in Cooper Rush moving up to...
Read more