Former San Francisco 49ers Quarterback Colin Kaepernick is apparently attempting to resurrect his NFL career and will hold a private workout for teams on Saturday in Atlanta according to Adam Schefter.

NFL clubs were informed today that a private workout will be held for Colin Kaepernick on Saturday in Atlanta. Session will include on-field work and an interview. All clubs are invited to attend, and video of both the workout and interview will be made available to clubs.

For fans who believed Colin Kaepernick was blackballed after all of the kneeling during the national anthem fiasco, this is long overdue. For everyone else, they probably couldn't care less. But, where exactly do the Dallas Cowboys stand? After all, that's all we really care about here around Cowboys Nation. Right!?

Well, it appears as if the Dallas Cowboys could be at least a little bit interested. Or, it could just be them doing their due diligence. Either way, it looks as if they will have somebody on hand at the workout.

After speaking to another team from my last tweet, as of now, I'm told there is interest within the #Cowboys organization to send at least one representative to Colin Kaepernick's workout, per source.

If you put aside all of the protest stuff and kneeling during the national anthem, this is a move that actually makes quite a bit of sense for the Dallas Cowboys. And, you can bet that this is an opportunity Kaepernick himself has been waiting for.

I’m just getting word from my representatives that the NFL league office reached out to them about a workout in Atlanta on Saturday. I’ve been in shape and ready for this for 3 years, can’t wait to see the head coaches and GMs on Saturday.

This may be the opportunity Kaepernick has been waiting for, but why should the Cowboys be interested? Well, let me try to lay it out for you little better…

You see, the Dallas Cowboys are going to need another backup quarterback next season. Cooper Rush is in the last year of his rookie contract and is set to become a free agent after the completion of the 2019 season. In Colin Kaepernick they would not only be upgrading Dak Prescott's backup, but also adding a QB with a similar skill set as him as well.

Now, there is a catch of course. There always is. Kaepernick hasn't thrown a pass in the NFL since the 2016 season. Also, he'd have to be willing to accept a backup role. Those are some pretty big red flags, but he could do a lot worse than bringing his talent to Texas as a member of the Dallas Cowboys.

The Cowboys could actually be the best spot for him to resurrect his career. The national attention he would receive as a member of America's Team could be the best place for him to put his talents on display and prove he still has something left in the tank, even if it is in a backup role. If he can do that, there's no telling where his career could go from there.

In all honesty, this sounds like a win-win for both the Dallas Cowboys and Colin Kaepernick. Uniting these two could be a match made in heaven. It's very possible both parties are interested in one another, but unfortunately we won't know how things turn out anytime soon. It's a waiting game now…

Do you think Colin Kaepernick would be a good fit with the Dallas Cowboys?

Colin Kaepernick has a right to speak his mind – but not necessarily while working and while in his employer’s uniform. His potential employers have a right to consider the impact of Kaepernick’s actions and words on their customer base.

Let’s hope that Jerry Jones and family don’t consider to give the Most Pathetic Immature, Disrespectful, Disruptive, Arrogant and Ungrateful Jackass an opportunity to play for the Cowboys. Kaepernick seriously needs to go back to school and study the Life of Martin Luther King. There is a Time and a Place for everything. I’m a Disabled Service Connected Veteran and the price I paid while I was in the Military was not for IDIOTS like Kaepernick and other so call Professional Athletes to KNEEL DURING THE NATIONAL ANTHEM. Thank goodness that Michael Bennett stood during THE NATIONAL ANTHEM. A BOYCOTT was scheduled to take place but it got canceled. If Jerry Jones brings this JACKASS and he dares to Stay in the Dressing Room, Sits or Kneels during THE NATIONAL ANTHEM we will BOYCOTT the HOME GAMES and never buy any merchandise. I could care less how good of a Quarterback this JACKASS may think he is. I would rather stay with Dak Prescott (CHOKE THE CHICKEN) before I see the JACKASS replace Prescott.

The Boys will probably send a coaching intern. Kap doesn’t fit the Cowboys scheme anyway. He was done three years ago!

I would hate to have to stop watching my team of the last 35 years over one ignorant player signing.

The whole thing is just a stunt by the NFL to keep Kaepernick’s lawyers at bay. Given the high number of losing teams this year and this guy still has no job makes it quite obvious absolutely no one wants him on their roster.

Of course there is always a chance somebody sees the football good in him and gives an opportunity.

Kaperneck married a Muslim woman then converted to Islam ideology just before Disrespecting our Flag. The practice of islam on American Soil is Treason on America. kaperneck should loose his Citizenship and be Deported out of the USA. kaperneck is the reason I don’t watch all the NFL. kaperneck will hurt the Cowboys by just talking a bit him. He is a trader to the USA 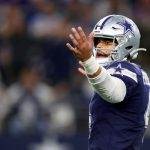 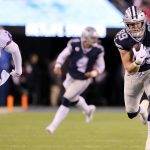