The Dallas Cowboys playoff run continues with another familiar opponent on Saturday, though not with the same expansive head-to-head history that the Seattle Seahawks brought into AT&T Stadium for the Wild Card Round. While that game was about Quarterback Dak Prescott and Running Back Ezekiel Elliott avenging last season’s loss to the Seahawks – keeping the duo out of the playoffs for the first time – this revenge tour continues with an added emphasis on the Cowboys coaches in Los Angeles.

Coordinating the LA Rams defense is former Cowboys Head Coach Wade Phillips, who current HC Jason Garrett replaced in 2010. Winning five of the Cowboys final eight games after Phillips’ 1-7 start, the Garrett era began with an optimism that hasn’t necessarily been met eight years later. The same can be said on Saturday night if the Cowboys don’t manage their first road playoff win since 1993 (in San Francisco).

Garrett and Scott Linehan’s offense matching up against Phillips’ defense is not the only familiarity in the game between the headsets this weekend, as the Rams’ potent offense lines up against Kris Richard’s defense – just as it did when Richard was with the Seahawks.

Rams defensive coordinator Wade Phillips today on facing the Cowboys: “Jason Garrett has done a tremendous job there. He’s a better head coach than I was, and done better.

Phillips was asked Wednesday about the #2 seeded Rams facing the Cowboys, praising not only Garrett but Jerry Jones too.

Once the shine on Garrett’s tenure wore off as the latest Cowboys coach, he’s been forced to constantly prove doubters wrong. In a resurgent effort that’s seen him become the only active HC with two playoff wins quarterbacked by different starters, Jason’s earned the respect of his predecessor.

The Cowboys want to play for a leader like Garrett. This was evident when the former OC was an interim, when the Cowboys navigated a trio of 8-8 campaigns during a total roster overhaul, and most recently as they’ve advanced to the Divisional Round for the second time in three years. 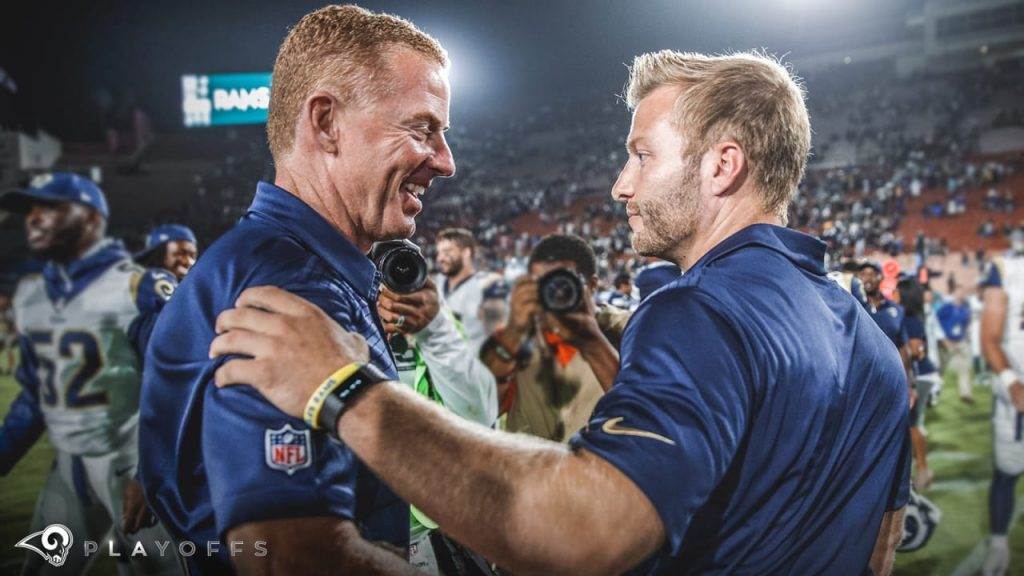 Dallas will gladly trade the flare and hype around everything Los Angeles and Sean McVay’s Rams for another playoff win, something this Rams regime still lacks. Last season, Los Angeles hosted the Atlanta Falcons in the Wild Card Round, losing a game controlled by the Falcons in similar fashion to how the Cowboys have won this season.

The Rams defense allows the 10th most rushing yards a game at 122.3, feeding into the Cowboys approach to keep Elliott involved early and often. In last year’s playoff loss, the Rams were hapless against a Falcons running game that grounded out 124 yards on 39 attempts. Four Falcons field goals provided enough of a cushion to win on the road 26-13.

The individual match ups that will decide this game are beyond the scope of this look at Garrett through the coach he replaced, and falls on plenty of Cowboys coaches in similar shoes for 2018. Just one example is mid-season hire Marc Colombo as Offensive Line Coach, tasked with scheming against the best defender in the league this week in Aaron Donald.

Ask anyone inside The Star that works with Garrett daily and they’ll talk about a great leader of men that’ll have his team well prepared for their latest challenge at the Rams. Do the same in Los Angeles and an equal amount of respect is held for the visiting Cowboys, coming off Garrett’s second playoff win – putting him ahead of Phillips’ with his lone playoff victory coming in 2009 vs. the Eagles.

Tell us what you think about “Rams DC Phillips: “Jason Garrett Has Done A Tremendous Job with Cowboys”” in the comments below. You can also email me at Sean.Martin@InsideTheStar.com, or Tweet to me at @SeanMartinNFL!