Randall Cobb Lives Up to the Hype in Dallas Cowboys Debut

Have you ever seen that show Storage Wars on A&E? That's the show where people go to storage facilities and bid on abandoned or seized storage units in the hopes of turning their purchase into profit. They don't get a chance to go inside the locker and dig through the stuff they see until after they make the purchase, but from the outside looking in, they can get an idea on the value of the storage locker.

This is basically how the Dallas Cowboys do their free-agent shopping. They wander through free agency looking for players that have lost value for whatever reason with the hopes that the player will stand out for them and help the team turn a profit on their investment. Over the years this strategy has had its hits and misses, but overall it's a strategy that's worked for them.

In the 2019 offseason, the Dallas Cowboys set their sites on replacing slot wide receiver Cole Beasley and came away with one of Aaron Rodgers' favorite targets Randall Cobb. Cobb had formerly had a 1,000-yard season and been selected to the Pro Bowl but injuries in 2018 held him back and the Packers elected not to resign him.

What the Packers didn't want, the Dallas Cowboys were excited to sign. And for the low price of $4.5 million in 2019, the Cowboys have a player that's already paying huge dividends in Randall Cobb.

Coming over from the Green Bay Packers, Randall Cobb came with the reputation of being able to make big plays and make create yards after the catch. On Sunday afternoon against the New York Giants, Cobb, in his Cowboys debut made both of those things happen. He finished the day with four catches on five targets for 69 yards and a touchdown that went for 25 yards.

Per Pro Football Focus, each of his receptions went for a first down and he averaged 10 yards per reception after the catch. Per Next Gen Stats, Cobb's 4.4 yards of separation per reception rank eighth in the NFL through week one. 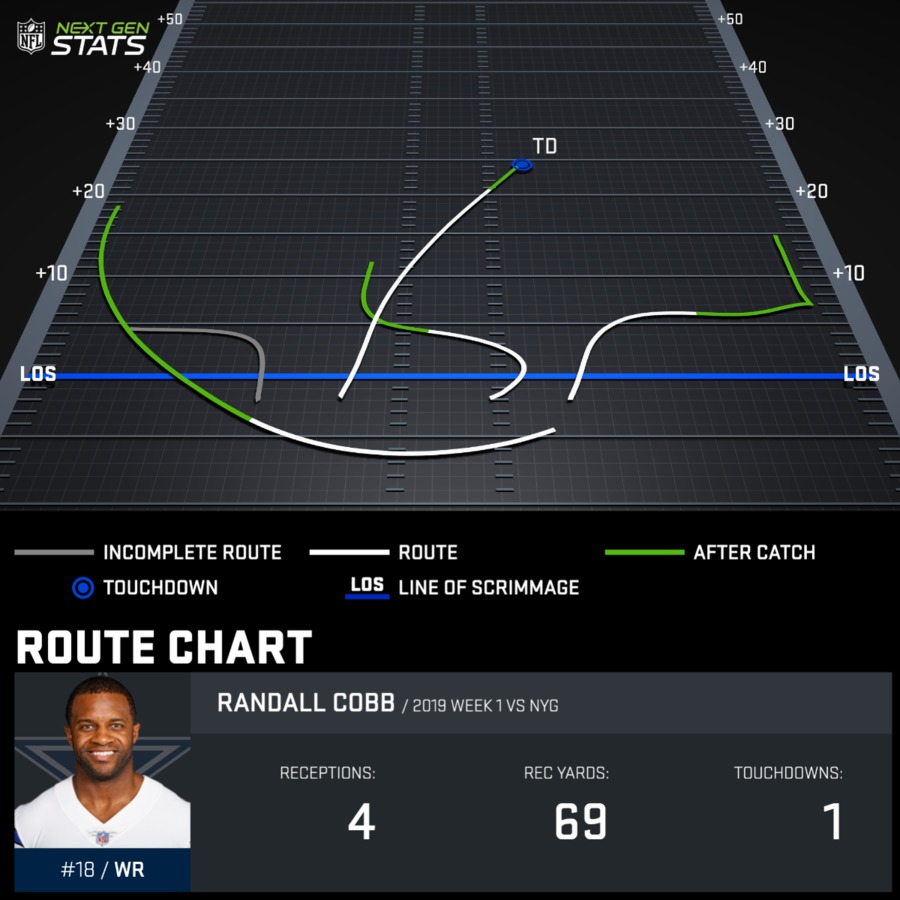 As you can see from the chart, the Dallas Cowboys lined him up all over the formation and used him in motion quite a bit. Cobb saw 87.5% of his snaps from the slot on Sunday but was equally effective on the outside as he was in the slot. Two of his four catches and 32 of his 69 receiving yards came when lined up on the outside.

Cobb's 11.1 yards after the catch per reception, per Next Gen Stats ranks seventh in the NFL, just behind Michael Gallup. Though that average won't hold up over the course of the season, it was an area that the Cowboys expected to improve at with their slot wide receiver. On all four of his receptions, as you can see in the chart above, he had significant yards after the catch, three times catching the ball short of the first down marker and making a play to get the first down.

Along with Amari Cooper and Michael Gallup, Cobb was one of three players for the Cowboys to have at least 17 yards per reception on Sunday. Considering only two players in the top 20 in receiving yards in 2018 averaged 17 yards per reception or more, it's pretty incredible that the Cowboys were able to have that kind of effectiveness going down the field. It's unlikely that they'll be able to maintain that high of yards per reception throughout the course of the season, but it's clear evidence of Kellen Moore's goal as an offensive coordinator. Go vertical and stress the defense.

Cobb played 71% of the snaps. He, Cooper, and Gallup were the only players not named the offensive line and Dak Prescott to play more than 70% of the snaps on Sunday. That will change as Ezekiel Elliott gets up to speed, but again, that's another sign of this team's intention to run 11-personnel and run it a lot.

When he signed his contract, we knew that Randall Cobb was a steal, but seeing how he was deployed on Sunday makes him a gold mine for big plays from the slot. He showed toughness going over the middle and breaking tackles. He showed a nice ability to take a swing pass for a big gain. Cobb is an excellent player in the slot and is going to be someone that is an x-factor for the Dallas Cowboys in the 2019 season.

Cobb's ability was never the question as he left Green Bay. After struggling with injuries last season, the Dallas Cowboys were able to get a discount on a Pro Bowl player, still in his prime, with a lot to prove to the NFL. In this offense with Amari Cooper, Michael Gallup, Ezekiel Elliott, their offensive line, and Jason Witten, Randall Cobb is going to have a lot of opportunities to make plays as teams focus on the attempt to account for the rest of this talented roster.

When the Dallas Cowboys make a free agent move in the offseason, it's generally them bargain hunting. Sometimes it works out for them, other times it doesn't. It's evident that as long as Randall Cobb stays healthy, the Dallas Cowboys will have struck gold with this signing. His addition to the offense is already paying huge dividends in the passing game.

John Williamshttps://anchor.fm/inside-the-cowboys
Dallas Cowboys optimist bringing factual, reasonable takes to Cowboys Nation and the NFL Community. I wasn't always a Cowboys fan, but I got here as quick as I could. Make sure you check out the Inside The Cowboys Podcast featuring John Williams and other analysts following America's Team.
Previous articleCowboys Sign Practice Squad LB Chris Covington, Cut RB Jordan Chunn
Next articleReport: Dak Prescott Named NFC Offensive Player of the Week

Can Cowboys Replace Randall Cobb With Another Converted Kentucky QB?

Comparing Lynn Bowden Jr. to Randall Cobb feels kind of lazy. Yes, they are both Kentucky Wildcats who spent time at quarterback in college, but...
Read more
NFL Draft

The Dallas Cowboys did the right thing the last couple of years by letting both Cole Beasley and Randall Cobb depart via free agency,...
Read more
Cowboys News

There's been no shortage of Dallas Cowboys free agency news over the past 48 hours. The comings and goings of star players have stolen...
Read more

I love this story, the route chart is also really cool. I think Cooper, Gallup and Cobb can achieve great things this season esp. when Zeke gets rolling. Our O line gave Dak time to get through his progressions, kitna’s work on his mechanics are already paying dividends and all 3 receivers seem to possess an amazing collective ability to run precise routes and generate YAC. Can’t wait for Sunday against the Redskins.

The Route chart is awesome. I think Cobb brings a really nice run after catch element that the Cowboys didn’t have in seasons past with Beasley. Beasley was a good receiver, but he didn’t give you a whole lot after the catch.

Thanks for the positive feedback.

My pleasure. I have noticed a really disturbing g trend, John. Writers for Dallas Cowboys.com, BtB and thelandryhat are doing much less analysis like you wrote about, and much more of the opinion piece/click bait variety. Not sure why, but there seems to be a lack of quality coverage. Keep up the great work!!!