Things to Remember Prior to Dak Prescott’s Imminent Extension

Dak Prescott's extension is coming. As we wait impatiently for the 2019 season, the Dallas Cowboys' front office is hard at work trying to work out a deal for their quarterback of the future. As talks start speeding up, fans continue to argue if this is the right thing to do for the Cowboys.

The news will soon arrive that both parties have struck a long-term deal and heated discussions will break out among fans, writers and analysts, so I thought it'd be a good idea to list a few things to remember prior to the chaos.

Price isn't about who's the best QB

Recently, Forth Worth Star-Telegram reported Prescott's deal could reach an average of 30 million dollars per year. Yes, $30M per year sounds like a lot of money. Well, it is. But that's how the quarterback market in the NFL works. As we await the imminent extension for Dak Prescott, many in Cowboys Nation argue passionately about whether or not he's worth it. Many say he's worth less money, and that keeping him for a lower price tag would be the correct move.

But don't forget that's not how things work in this league. If you want to keep a potential franchise passer, you must pay him what the market dictates. No less.

There's a reason why the deals around the league keep getting bigger and bigger every year. Annually, the salary cap increases. If a football team can spend more, then the player can earn more. On average, Matt Stafford earns 27 million dollars per year and Jimmy Garoppolo $27.5M. Based on these contracts, you might think Prescott should be closer to a 27 million average instead of a 30 million average. However, Garoppolo signed his contract a year ago and Stafford's deal took place prior to the 2017 season.

Since then, the salary cap has increased considerably, which makes $30 million a year a reasonable price tag for a 25-year old quarterback who has been able to win in the NFL. Which brings us to the next point…

Dak Prescott has been a winning QB for Cowboys

Prescott is far from an elite player and isn't a pinpoint passer by any means. However, we're talking about a guy who's been winning since the moment he took the field as a professional, which was way earlier than expected. The former fourth round draft pick has led his team to win the NFC East in two of his first three years in the league. In his rookie season, the Cowboys finished the season as the #1 seed in the NFC.

Since entering the league in 2016, he's the quarterback with the most game-winning drives (14). Since then, he's also one of three quarterbacks who have thrown more than 60 TD passes and less than 25 interceptions. The other two are Aaron Rodgers and Tom Brady.

He's a clutch player who can both throw and run, and keep the offense moving. He's a natural leader and has throw power, touch, and a remarkable ability to make plays when it matters most. He has been a winner since the moment he stepped in and he should continue to be one.

A popular narrative among Cowboys fans is the idea of waiting to extend him after he's played out his current contract. That way, you get to see more from him before committing to a long-term deal. It's a decent idea, but it's seriously flawed.

If Prescott goes on and wins the division for the third time in a four-year span, his demands will be way higher next offseason. But the way I see it, there's an even more important reason why the front office should extend Dak now.

Patrick Mahomes is heading into his third season and should be getting a big-time extension next year. Mahomes' deal could reset the QB market after such a monstrous 2018 season. When we see what Kansas City's newest hero asks for, we'll be glad the Cowboys got Dak's deal done in 2019. 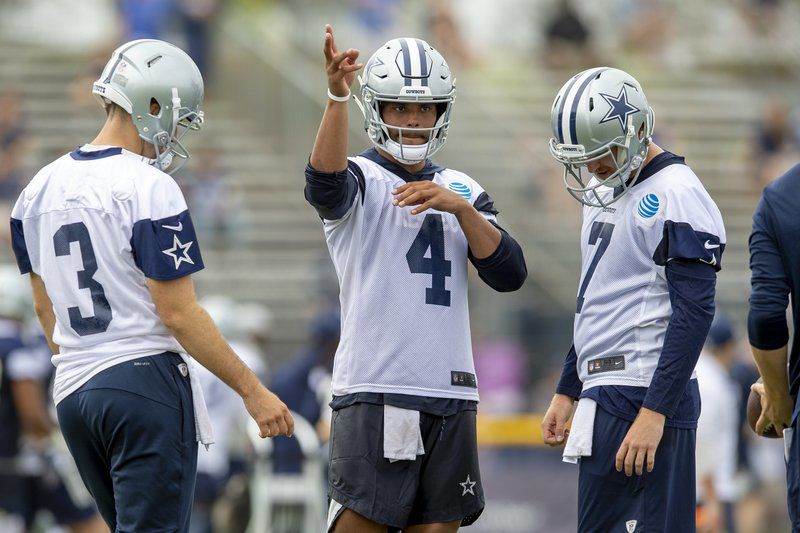 Either you pay Dak Prescott or you bring in someone who can do better. The small problem is, who's that guy? You're not getting a franchise QB in the market right now, and you're sure as hell not drafting him in the 2020 NFL Draft unless you go 0-16. And no, the Dallas Cowboys are not having a winless season in 2019.

So realistically, the Cowboys have two options. 1) Pay Dak the market value to keep a potential franchise QB who's been able to win consistently in the NFL and still has a ton of upside, or 2) let him walk, find a mediocre starting quarterback to step in and regret it until you find another promising signal-caller (a task Cowboys fans should know isn't easy at all).

If there was one thing in the world that Cowboys owner Jerry Jones loves to do, it's to stir up controversy with his words....
Read more

It is an easy call except for the haters that can’t accept that Tony Romo is gone.

Honestly people get too hung up on Dak’s accuracy numbers. In 2018 he completed 67.7% which ranked him 10th most accurate. Yes he was more accurate than Tom Brady, Patrick Mahomes, Jared Goff, Russell Wilson, Ben Rothleisberger…too name a few. People see him as inaccurate because we watch him every week but it’s really, really hard to throw a football in the NFL. Personally, the biggest issue I have with Dak is holding onto the ball too long and getting sacked. He has to learn to get out of the pocket and throw the ball away. I think that is a maturity issue and I expect to see improvement there this year.