The Dallas Cowboys have a rich history of unearthing gems that weren't selected in the annual NFL Draft. Tony Romo, Miles Austin, and Cole Beasley all went undrafted and made significant impacts for the Cowboys during their tenures.

With a shortened offseason and really solid depth up and down the roster, it was looking unlikely that any of the undrafted free agents from the 2020 class of undrafted signees would stick to the 53-man roster. Fewer practices and no preseason games meant fewer opportunities for the down-roster guys to make an impression.

Former Utah Linebacker Francis Bernard didn't get the memo. Early in camp, Bernard has caught the attention of observers in the building and one Leighton Vander Esch.

Dallas Cowboys LB Leighton Vander Esch was asked on @1053thefan for a breakout candidate on the team's roster.

The Dallas Cowboys have been preaching the importance of getting turnovers for years, and this new defensive staff has made it an emphasis as well. The problem has been finding and playing players that appear to have an instinct to take the football away. Early in training camp, it seems they've found one.

Though undrafted, Bernard, was a playmaker in college. In two seasons as a starter, first at BYU in 2016 and then at Utah in 2019, Bernard had five interceptions, 13 tackles for loss, four passes defended, two sacks, two forced fumbles, a fumble recovery, and an interception return for a touchdown. Bernard is still learning the position at linebacker after making the switch early in his career, but he was a first-team All-Conference selection in 2019.

Here's what Kyle Youmans of The Draft Show and DallasCowboys.com had to say about Francis Bernard after he signed.

“A coverage heavy linebacker that's still learning the position after making the switch from running back as a sophomore. Bernard was a featured part of one of the best defenses in college football along with Cowboys' fifth-rounder Bradlee Anae and other 2020 draft picks like Terrell Burgess and Leki Fotu. His length and lack of athleticism will each be obstacles to overcome as a rookie, but some ‘draft experts' had Bernard as a Top-200 player in the class which makes his signing a steal. There is no doubt that he's an NFL ready linebacker that can not only make a roster, but an impact as well despite his multiple limitations.”

Though Francis Bernard finds himself buried on the Dallas Cowboys depth chart at linebacker, there's no reason he can't force his way on there with his play in camp. He's already made a strong first impression with Linebacker Leighton Vander Esch, and if he continues to make plays as he has in the early going, it will be hard for the Cowboys to not find a spot for him on the 53-man roster.

To me still alot uncertainty with this unit moving forward. Since this is likely the great S Lee last yr we have to be planning for his replacement. Will LVE neck problems be an issue?
J Smith seemed to regress a bit last yr and if that continues can we justify that big contract we gave him? I think they like L Gifford who couid push for starting status next season. I still don’t understand why they didn’t lock up Joe Thomas (who I like) for more then 1 yr He is young enuf and good enuf to be a starter next yr. Bernard could be a sleeper, but he wasn’t drafted by us, so uncertain how many yrs we have him for.

Cowboys fan
Reply to  Gary b

Bernard wasn’t drafted by anybody!! We signed him as an undrafted free agent!! So we’ll have him for at least 4 years if he makes the final 53!! The only way we lose him before that 4 years is if we put him on the practice squad and another team takes him away!!

Yes I was aware he was signed by us as an UDFA. Just wasn’t sure how the contract worked. Actually it’s a 3 yr contact as it is with all UDFAs, with the 4th being restricted. USDFAs are also eligible to renegotiate after 2 yrs. Well I learned something new!

Like G. Is a great mention here! As well as Joe T.! I believe with Lee being a coach this yr.. Not mentioned here; is the Dexter Coakley affect! This guy has it! And his movement & instinct allows him to see wht the other two are doing to make a play! He is our insurance on eggless screen play; along with Lewis! We’re in great position! McCarthy is seeing wht the last regime didn’t! 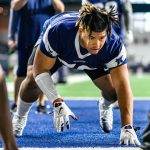 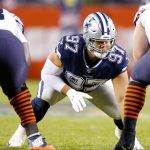