UPDATE: News of Hurns saying he will sign with the Cowboys broke as this article went live.

Free Agency began a bit late for the Dallas Cowboys, but they’ve already done enough to get fans discussing about the latest additions to the roster. Adding help on offense, defense and special teams in form of tier-2 free agents may not be what Cowboys Nation wants to see, but I’m certain they wouldn’t have enjoyed giving Sammy Watkins a three-year $48M contract, either.

However, the Cowboys are clearly in the wide receiver market after an offensively disappointing season. They have quite a few of this year’s class of wide receivers prospects scheduled to visit Dallas, and they’ve hosted some WR free agents as well.

This week, they even signed one.

Deonte Thompson, who started seven games for the Bills last year, is coming to Dallas on a one-year $2.5M contract. The 29-year old could be the burner receiver this offense is missing and could end up being an improved version of Brice Butler for the Cowboys in 2018.

He hasn’t had a great career but last season was his best year so far. Starting three games for the Bears and seven for the Bills, Thompson was able to rack up a career-high 555 yards and two touchdowns.

His best attribute as a player is definitely the speed he brings to the table and his ability to separate down the field, which he’ll be looking to do on Dak Prescott’s offense this season.

But there was another wide receiver visiting Dallas this week and now we wonder whether or not the Deonte Thompson signing will keep the Cowboys from targeting former Jaguars’ WR Allen Hurns.

According to Todd Archer, that won’t be the case.

Told the signing of Deonte Thompson does not close the door on the Cowboys' interest in Allen Hurns, who visited the team Wednesday and had dinner. Things could get interesting in the Cowboys' wide receivers' room. https://t.co/Ivt5uk9kBN

It shouldn’t be. First of all, Hurns is a much better player than Thompson and would provide this offense with a receiver who can play in the “X” or in the “Z” role. We’ve been talking about getting Prescott a reliable target to try to give him a “best friend.” Allen Hurns could be just that.

Sure, he’s had a couple of down seasons, but the talent is there to take.

Simply put, the Deonte Thompson signing shouldn’t stop the Cowboys from looking at WR in the first round of the NFL Draft. Allen Hurns would. 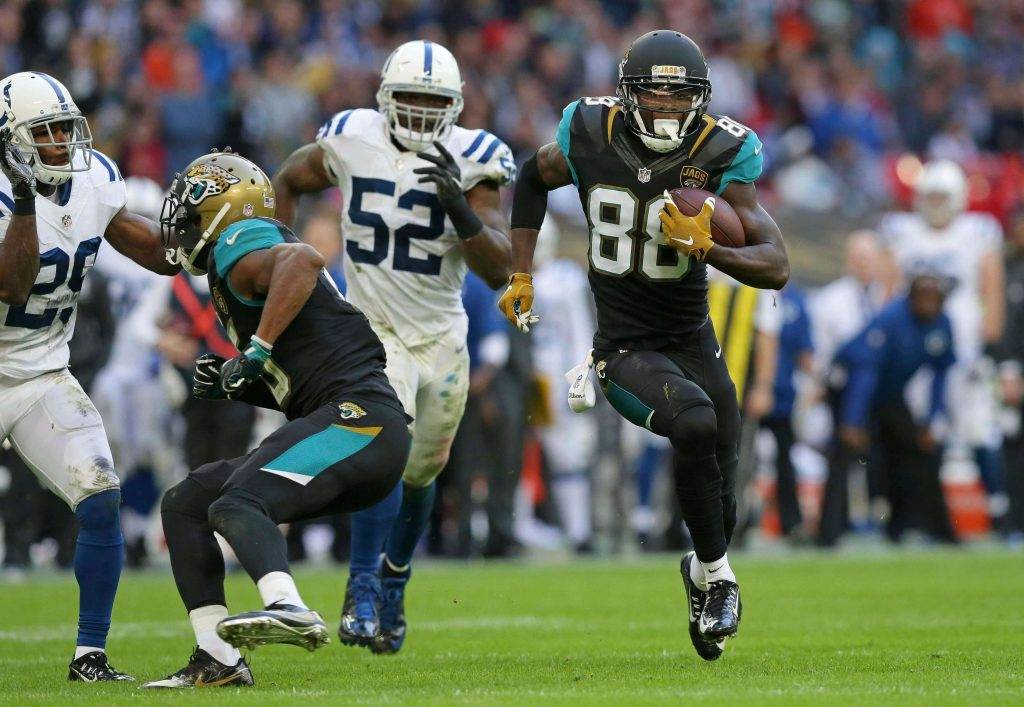 It sure would make things interesting in the wide receiver room for Dallas. Despite what many believe, Dez Bryant will probably remain a Cowboy even if Hurns is signed. Let’s say the Cowboys go out there and get the 26-year old from Jacksonville and have to decide which six receivers to keep for the season.

They’d possibly have to decide among these:

This is where a lot of dilemmas start taking form. Cole Beasley and Ryan Switzer are basically the same player and if you’re not going to use them both at the same time, do you keep them anyway? What about Terrance Williams? He could be the worst receiver to make the cut just because of his contract.

Noah Brown showed promise in 2017, are they ready to move on from him? And finally, a rookie could very well end up beating Deonte Thompson, who was guaranteed a million in his contract.

Wide receiver is indeed one of the top needs for the Dallas Cowboys. They could head to the 2018 NFL Draft needing one in the top rounds or they could be fine signing Hurns and taking a late-rounder receiver to compete in training camp for a spot on the roster.

As long as they’re having a tough time deciding because they are all good, it should be fine.

Tell me what you think about “What Signing Thompson Means for Hurns and Cowboys WR Position” in the comments below, or tweet me @MauNFL and let’s talk football! If you like football and are looking for a Dallas Cowboys show in Spanish, don’t miss my weekly Facebook Live! show, Primero Cowboys!