Every year a number of players will enter a contract year looking to put together a good 16 game season to boost their resume ahead of free agency. For many of the players on the Dallas Cowboys, they will be seeing their first opportunity to hit free agency.

The premise of a contract year comes with some negative connotations. Players are often dinged for performance that occurs in a contract year but hasn't occurred at any other time in their career. However, in a what have you done for me lately league like the NFL, recent performance can change the perspective on a player.

Let's look at five Dallas Cowboys who will make themselves very marketable with a good year in 2019.

Note: For the purpose of this piece, we're assuming that Dak Prescott and Amari Cooper get long-term deals this offseason. Ezekiel Elliott is under contract for the 2020 offseason, so he doesn't apply.

The Dallas Cowboys offensive line continues to be a strength for the team as they head into the 2019 season and a big reason for that is the play they've gotten from Right Tackle La'el Collins. He hasn't been as good as his left tackle counterpart Tyron Smith, but Collins has been good. His ability to hold up against some of the better pass rushers in the league has been a pleasant surprise.

Collins, going into his fifth year in the league, has started 46 games, including 32 straight at right tackle for the Cowboys. Collins will only turn 26 this year and has a lot of years of good football left in him. Given that offensive lineman are at a premium in the NFL, Collins should expect a market for his services when he comes free after the 2019 season.

In 2019, Collins played the third most snaps at right tackle in the NFL. Pro Football Focus credited him with 46 pressures allowed and eight sacks, tied for fifth most at the tackle position.

Collins has a ton of experience, but could use a really good 2019 to solidify himself as one of the top free agents in 2020.

The Dallas Cowboys found a gem of a player in the sixth round of the 2016 draft. Next to Dak Prescott and Ezekiel Elliott, Anthony Brown was the best pick of that draft. Based on value for draft capital spent, only Prescott would be seen as more valuable.

Brown has been an excellent corner for the Cowboys. Primarily playing in the slot, but flexing to the outside when injuries arose. He's played with an edge for the secondary and has been equally good against the run as he's been in coverage.

Brown will likely remain the starter in nickel situations, but will see some competition from Jourdan Lewis and rookie Michael Jackson.

If Anthony Brown is able to put together another solid to good year, he should be able to find a team willing to give him a multi-year contract in the 2020 offseason, the Dallas Cowboys included. With Byron Jones coming during the 2020 offseason, it's possible that they could opt to keep Brown over Jones as Byron would likely demand a larger contract.

Just like Anthony Brown, Maliek Collins was a nice find in the 2016 NFL draft.

Selected in the third round that season, Collins finished with 27 total pressures and five sacks. Though the pressure numbers have stayed similar — 30 in 2017 and 27 in 2018 — the sack numbers have dropped off considerably — two in 2017 and three in 2018.

This only increases the competition and the pressure for Collins heading into his contract year. He'll need a good training camp to keep up his role. Some luck with health would help, as injuries have prevented him from having a full offseason since being in the league.

If Collins can put together a similar season to his rookie year, he'll find himself with a market heading into free agency.

The Dallas Cowboys brought in Randall Cobb to be the team's heir apparent at slot receiver after Cole Beasley signed in Buffalo. Coming in on a one-year deal, Cobb has a lot to prove as he enters the later stages of his career.

After being a mainstay in the Green Bay Packers offense, Cobb was allowed to walk in free agency as injuries had caught up with the soon to be 29-year-old receiver.

Cobb has to prove he can stay healthy for a full season as he's only played 16 games once in his career. If he can stay healthy, he'll be a weapon for Dak Prescott and the offense. In five of his eight seasons, he's caught more than 60 passes and three times caught more than 79 passes. In two of those seasons where he didn't catch at least 60 passes, he played fewer than 10 games. The other one was his rookie season. He played 15 games that year, but only saw 31 targets in 2011.

Wide receivers have shown that they can maintain production through the latter part of their careers, but for Cobb to continue to get opportunities, he'll need to continue to have good health. In this offense where Dak Prescott loves to target the slot receiver, Cobb should have plenty of opportunities to prove he's still a valuable commodity in the NFL.

Amidst all the contract talk surrounding Dak Prescott, Amari Cooper, and Ezekiel Elliott, it seems that Byron Jones might be the forgotten man in the Cowboys pay-day hierarchy. There hasn't been much talk of getting Jones an extension lately.

How the Cowboys handle Byron Jones could be similar to how they handled DeMarcus Lawrence. If you'll remember, after Lawrence had his break out year in 2017, the Dallas Cowboys opted to use the franchise tag on their elite edge rusher to make sure what he accomplished was repeatable.

Byron Jones finally experienced the breakout after finding a home at cornerback in Kris Richard's defense. The problem is, it only took him four years to find excellence. Most of that can be attributed to not having a home his first season and then playing out of position the following two when the Cowboys attempted to play him at safety.

Despite a lack of interceptions, Jones was one of the best cornerbacks in the NFL in 2018, but the Cowboys could be hedging their bets to see if he can do it again.

Jones is an incredible athlete with excellent coverage skills and if there's a weakness to his game, it's that he doesn't take the ball away. In Rod Marinelli's and Kris Richard's defenses, taking the ball away is of the utmost importance.

With a potentially big contract looming, Byron Jones may be forced to earn it in 2019 before getting paid in the 2020 offseason.

The Cowboys have a lot of contracts coming up at the end of this year that need to be taken care of, but these five are the most important contract years that will have the biggest impact on the success of the Dallas Cowboys.

Obviously, both Collins’ are out due to this stupid draft we just had. They might not even be on the team THIS season if we trade em now. Cobb is a rental, and Brown will get deservedly paid, but not by the Cowboys. That leaves Byron, and I don’t think we’ll be re-signing him either, so great article about guys who won’t be here in one season or less I guess 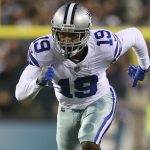 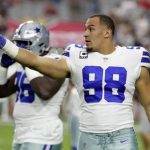