There’s a lot of questions surrounding the new look wide receiver position for the Dallas Cowboys and how they are going to help Dak Prescott in the passing game in 2018. Their top two targets, Dez Bryant and Jason Witten, are no longer in the equation, which creates quite a bit of uncertainty of how things will shake out heading into the season.

With the revamped receiving core, somebody needs to step up. Allen Hurns is a great addition, especially for the price, but he can’t do it alone. Cole Beasley will once again be asked to be Prescott’s security blanket, but teams found a way to take him out of the game last year. So, somebody’s going to have to pick up the slack, but who?

Even though Michael Gallup was just a third-round draft pick, there is already quite a bit of pressure placed on his shoulders to replace some of Dez Bryant’s lost production. I know it’s not fair to expect so much from a rookie, but that’s the nature of the business.

Gallup is literally going to have to hit the ground running. He has a chance to win the starting outside receiver spot opposite Allen Hurns from the get-go due to Terrance Williams having to miss time with a broken foot.

He will undoubtedly be given every opportunity to prove himself, but we have seen in the past few years how rookie wide receivers struggle once they get into the NFL. Can Michael Gallup be an exception and contribute immediately?

You may agree or disagree, but I believe Michael Gallup will not only contribute right away, but will also end up being the best WR on the Cowboys roster by the end of the year.

Michael Gallup is what you would call a “quarterback friendly” wide receiver. He is able to create separation on his own because of his precise route running. Luckily, that will only improve under the tutelage of Sanjay Lal, the new wide receivers coach.

This should make Dak Prescott absolutely giddy. He is a type of QB who will hold onto the ball until he finds an open receiver. It’s one of the reasons why he and Dez Bryant never really clicked. Fortunately, I think Prescott and Gallup will click right away. 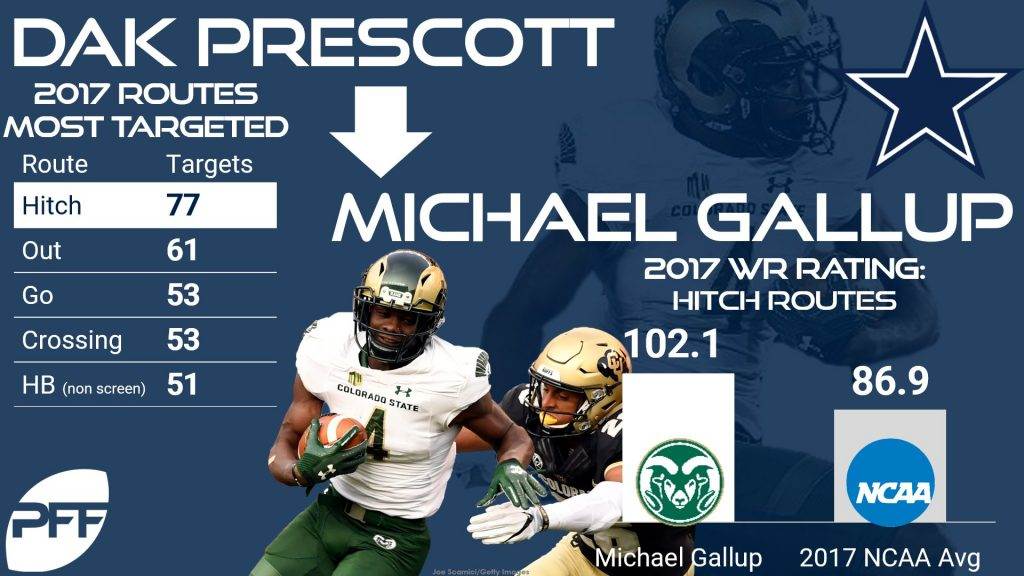 Michael Gallup’s strengths fortunately fit what Dak Prescott likes to do as a QB. Not only is Gallup able to get open on his own like previously mentioned, but his favorite/best route is the hitch route, also Prescott’s favorite.

I expect these two to build a good working chemistry throughout the remainder of the off-season and it should show once the 2018 season gets underway.

So, if you put any stock into what I believe, then you should expect Michael Gallup to not only be an immediate contributor, but maybe just be the best wide receiver the Dallas Cowboys have in 2018.

Do you think Michael Gallup will contribute immediately in 2018?