The 2016 NFL Draft for the Dallas Cowboys is shaping up to be one for the history books. All-Pro Ezekiel Elliott, Dak Prescott, Maliek Collins, Anthony Brown and Kavon Frazier were all found by Vice President of Player Personnel Will McClay. However, the most intriguing and questionable pick, at least at the time was Linebacker Jaylon Smith out of Notre Dame. 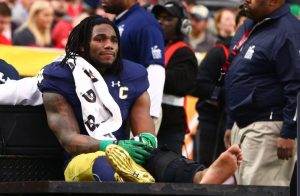 In his final collegiate game against Ohio State in the 2016 Fiesta Bowl, Smith suffered a gruesome and potentially career-ending knee injury tearing both his ACL and MCL. This would change his top 10 draft stock and turned him into one of the biggest question marks entering the NFL. He began a strenuous rehab regimen that would have him squatting over 500 pounds and performing drills to work himself into peak condition just prior to the NFL Draft.

After his name wasn’t called in the first round it took about as long as a Super Bowl commercial to hear it in round two. The Cowboys took him with the 34th overall pick and Smith’s NFL journey was off and running.

The Cowboys and Jaylon took all the precautions necessary to avoid any risk of further injury as he would sit out his entire first season. When 2017 rolled around he played in all 16 games with 6 starts. Even though he still wasn’t quite the player he was coming out of college you could see the flashes of greatness from the physical specimen. He would finish with 81 tackles and set up high expectations in his second year on the field.

2018 saw Smith elevate his game to a level that when the best linebackers in the league are mentioned his name is near the top of the list as he registered 121 tackles, 4 sacks, 4 passes defended, 2 forced fumbles, 2 fumble recoveries, and a touchdown. Truly an amazing accomplishment when you consider just two years prior he was wearing an AFO (Ankle Foot Orthosis) device as he dealt with a condition called drop foot. 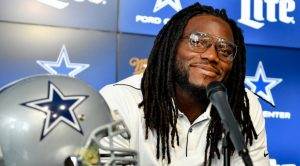 Back in May, Patrik Walker of CBS Sports reported the Cowboys had begun talks with Smith on a long-term contract extension. With the looming deals of Ezekiel Elliott, Dak Prescott, and Amari Cooper dominating the headlines of late those talks seemed to have simmered down, that was until recently. Last Tuesday the organization locked up Smith for the foreseeable future with a five-year 64 million dollar extension that includes 35.5 million in guaranteed money. This deal makes him the third-highest paid inside linebacker in the league behind the Seattle Seahawks Bobby Wagner and New York Jets C.J. Mosley. Not only did they get their starting middle linebacker under contract through 2025 they did so without resetting the market, smart business.

Cowboys Owner Jerry Jones got emotional during the press conference announcing the new deal. He expressed his respect for the journey Smith went through to get to this point.

“He has never complained, he has never wavered, never missed a workout and he has never quit — not one time,” Jones said. “He is admired by his teammates, he’s admired by the people he competes against. His story is one I would have done anything to make sure that it could be a Dallas Cowboys story.”

Smith himself understood the risk the Cowboys took on him in 2016 and what he had to do to live up to it.

“You took a risk, a $4.5 million risk, had I never been able to play again,” Smith said of team owner Jerry Jones and Stephen Jones. “So me understanding that, it was my duty for them to get the return on their investment. They’ve been able to do that. And now I’m fortunate enough to really be a Cowboy for life, which is what I want. I’m thankful to be here, for sure.”

Just weeks prior to his new deal Smith made a profound statement regarding his personal journey and that of the Cowboys in 2019.

“For me, it’s always been about my clear-eye view and embracing each moment I was in. From redshirting, to coming back and playing a little bit and getting better every week, to being dominant and now, on our quest to win the Super Bowl.”

The “Clear Eye View” of Jaylon Smith has been a three-year odyssey that has culminated with him securing his financial future and being recognized as one of the best at his position. The fans love him, the organization loves him and his teammates. He’s the classic “right kind of guy” as Head Coach Jason Garrett would put it. What should concern opponents of the Cowboys is he’s only 24 years old so this story is only beginning with no end anytime soon.