The Dallas Cowboys didn't make the kind of statement they'd hoped for in their matchup with the Arizona Cardinals. Struggles in all phases of the game, plus a critical fumble by Dak Prescott, led to a 25-22 loss against Dallas' potential first-round opponent in the playoffs.

The loss dropped the Cowboys to 11-5 and to the fourth seed in the current NFC playoff picture. If the playoffs started now, Dallas would host the fifth-seeded Cardinals again in the wild card round.

After an ugly first half and a 13-7 deficit at the break, the Cowboys did pick it up enough to make things interesting down the stretch. But their early sins, mainly stalled drives and missed field goal by Greg Zuerlein, proved too much to overcome.

Things started to swing Dallas' way late in the third quarter. After forcing Arizona backwards and into a punt from their own 5-yard-line, CeeDee Lamb returned it 17 yards and gave the Cowboys great field position just 31 yards from pay dirt. Dallas capitalized with a touchdown throw to Cedrick Wilson, narrowing the score to 22-14.

After reclaiming the ball from another Cardinals punt, Dak Prescott fumbled on a scramble and gave Arizona easy positioning for what would be the game-winning field goal. Even though Dallas came back again with another touchdown pass to Amari Cooper and a successful two-point conversion, they couldn't get the ball back as the Cardinals held on for the win.

The box score was ultimately kind to Prescott; 226 passing yards and three touchdowns for a 105.8 passer rating. But in addition to his costly fumble, Dak only went 24-of-38 and had several errant and tipped balls that stymied the offense.

Perhaps underrated in this failure is Dallas' inability to find any semblance of a rushing attack. Ezekiel Elliott was stonewalled most of the day; only 19 yards on six carries. One big run got called back on a holding penalty but otherwise neither he or Tony Pollard could get it going.

It also wasn't a great day for the ballyhooed Dan Quinn defense. Arizona was generally able to execute and we didn't get the turnovers or even multiple sacks (just one by Dorance Armstrong today) that have helped the Cowboys succeed in recent weeks.

The “glass half full” view of this game is that Dallas rallied and stayed competitive with another of the top NFC contenders. But their flatness in the first half was scary; a foreboding sign with the playoffs just two weeks away.

Too much inconsistency from top to bottom in this team to expect much in the playoffs. The play calling can be down right uninspiring for drive after drive. Then, there will be one good play call to get your hopes up before sliding right back into mediocrity either through conservative calls or poor execution.

It starts with the coaches, but Dak has a big part to play in it. I love Dak when he’s on his game and running the no huddle. I hate Dak when he has too much time to think and gets indecisive, sails one over or behind an open receiver, or throws one directly to a defender through a “miscommunication”.

To be fair, his receivers haven’t been helping him out much, with the possible exception of the now injured Gallup. One play, one of them will make a spectacular catch on a poorly placed ball, and the next, drop one that hits them right in the hands.

Our defense is great when their gambles pay off. Not so much when they don’t. Diggs, Kazee and Lewis freelance a lot, which leads to a lot of turnovers, but also a lot of busted coverages.

The OL is in rapid decline. Tyron made the Pro Bowl on reputation alone. He has been a shell of himself at times, playing through one injury after another. Neither of the Connor’s look like a viable answer at LG going forward. Biadasz, has improved, but still has a ways to go to look better than a post-GBS Travis Frederick. La’el hasn’t been his dominant self since his return. He’s actually making me miss Terence Steele.

Zuerlein is completely unreliable at this point. They can’t even trust him to make PAT’s consistently.

About the only consistent bright spot is the DL and that is despite a constantly revolving group due to injury and Covid.

I would love to be pleasantly surprised, but I see only disappointment and a lower draft position in our playoff future.

With many of the contributors on expiring contracts and little to no money to re-sign many of them, my hopes for next season are declining as well: https://www.spotrac.com/nfl/free-agents/dallas-cowboys/

They are going to have restructure the heck out of some contracts on some questionable players and possibly release others just to get under the cap: https://cowboyswire.usatoday.com/lists/dallas-cowboys-2022-free-agents-salary-cap/

This was probably their best shot in a long time, and they are throwing it away through sloppy coaching and sloppy execution.

Another complete failure by Dak Prescott. Nothing new from him when it comes to playing real competition though. Strips, fumbles, a couple near interceptions, over throwing, under throwing, throwing behind receivers. At least one of these things happened on every drive today. He is a disaster. The Cowboys are never coming back to prominence with him at QB. The only reason they have a decent record is due to the dumpster fire that the NFC East is this year. Looking over the schedule there are two maybe three wins against decent teams. As bad as he was today, the rest of the team and coaching staff shares plenty of blame as well. Penalties and poor blocking from the O line continue to plague this team. I would hazard a guess that there has never been a Super Bowl winner that had as many penalties as the Cowboys do this year. I have no faith that the coaching staff and players can rectify these issues before the playoffs start.

Have to agree with Todd, and this Cowboys fans, is your 40 mill, 3rd highest paid player in the NFL, good investment Jerry, you got us a 8-8 QB who when he has a really good team and playing against one of the weakest divisions in the NFL, he can get to the playoffs, but i think we all know that we play like this in Green Bay or anyone like this in playoffs, we gonna lose,

What a embarrassment, we were down 22-7 through 3 quarters AT HOME, (Guess Shannon Sharpe was right about us not really having a good home field advantage), hey Coop, i though you played great at home ? Yet only 3 catches for him in this one granted that one of them was a TD, Zeke where you at ? 9 carries for 16 yards and 1 catch ? Now Gallup’s looking like he’ll be out for the rest of the year with torn ACL, I mean, the boys sucked

I don’t see how anyone can look at this with any positivity, we scored 1 TD in 3 Quarters, didn’t score anything in 2 different 15 min quarters, scored 15 in 4th Quarter after Cards let their foot off the gas prematurely, which almost costed them, but honestly we should not have had a shot to win this one, it was pathetic

ONE AND DONE, THAT’LL BE DAK AND THE BOYS EVERYBODY

Man all you guys have some really good points! I’m going to take a little different approach and say that if we tweak a little here and there We should be alright! Now don’t get me wrong I guess I’m so frustrated that I’m making myself look at what we can do to make a long run in the playoffs! I hate that MG went down BUT we all need to face the fact that With CW in the lineup we are a better offense! He came in and gave us so much more versatility yesterday and has all year long!! That is just the way it is! Now what are we going to do with Zurline?? We never know if he is going to hit an extra point or a 65 yard FG! One good thing is that I believe we play better on the road than at home anyway!

I have to agree with some of the other comments here, unfortunately.

If one wants to be charitable, then DP is an inconsistent QB. It appears that he is good against bad teams with the HELP OF DEFENSIVE TOs. Conversely vs better teams he is not good. It’s been his MO for SOME TIME now and quite obvious to people that aren’t drinking the sport media/Cowboy PR hype machine Kool aid. Remember there are no Giants or Falcons or WFT etc.and no second or third string QBs in the POST SEASON.

I admit, I was optimistic early on, after a few good performances, but now, he looks to have regressed back to his old self again.

There are many PS QBs this year that a just better than this overpaid $40 million a year player. Very surprised JJ caved into giving him that ridiculous contract. It set the team back in many ways, none more IMPORTANT than NO SUPER BOWL this year, and for the foreseeable future.

Not only will this team not see a SB this, but now when it comes time to pay all these guys we got under rookie contracts at the moment, can we keep them when it gets to that time ? Is Micah Parsons gonna be another D Ware, in which we lose him to FA ? What about Gallup now, will we bring him back, if we do, how much are we gonna pay him ? He’s got a torn ACL now, so if we keep him and overpay for him, we may not get same production as before, or if we let him go, that’s one less piece for Dak

The Boys are setup for the very thing i said pre Jerry giving Dak his contract, we will be good with the talent we got on both sides, and since the NFC East is so weak, but ultimately, we’ll never win a SB with Dak as the QB, unless we get like 2 or 3 more Micah Parsons like impact players on the team

HERE COMES ANOTHER 4-5 YEARS OF MEDIOCRITY 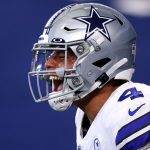 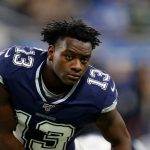