The Dallas Cowboys won't be getting CeeDee Lamb back for the 2021 Thanksgiving game as we'd hoped. The star receiver, battling a concussion issue, has officially been declared out for later today against the Las Vegas Raiders.

Lamb suffered the concussion just before halftime of last Sunday's loss to the Kansas City Chiefs. He did not return to the game and his status for today, given the short turnaround time, has remained in question up until now.

Reports throughout the week created optimism; Lamb seemed to be checking all the boxes with his practice participation for a quick recovery. But clearly he did not pass all of the steps needed to play and will now miss his first career game as a Cowboy.

Cowboys WR CeeDee Lamb was not able to clear the concussion protocol, according to @JayGlazer. He will not play today against the Raiders. Dallas needs a big day from Michael Gallup, Cedrick Wilson, Noah Brown and Malik Turner

#Cowboys WR CeeDee Lamb (concussion) is out today against the #Raiders, sources tell me and @SlaterNFL. Amari Cooper also out with COVID, leaving Dak Prescott without his top two receivers.

The Cowboys will have to hope that Dak Prescott can find better chemistry with backups Cedrick Wilson, Noah Brown, and others than he had last week. At the very least, Michael Gallup is good to go and should have the rust knocked off from his long absence.

Dallas may lean more on its ground game today with the Raiders having one of the league's worst run defenses.

However it shakes out, it will be a harder road without CeeDee Lamb and Amari Cooper on the field.

Time to pound the ball with EE and TP.

I didn’t think he would play anyway just being three days out from that injury! I always look forward to us playing that no name team out of Washington and was disappointed when I seen this year’s schedule and seen we were playing the Raiders but with all our injuries I’m glad we aren’t playing them today!

We’ll all I can say is if MG is as good as advertised this is a golden opportunity to step up and get open and carry the load for this team and that goes for CW as well! 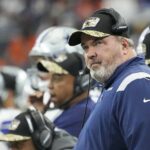 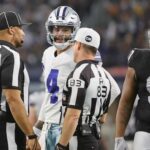