When the Dallas Cowboys selected Boise State linebacker Leighton Vander Esch with their first round pick of the 2018 NFL Draft, the whole world basically assumed he would be the starting MIKE linebacker week one of the upcoming season.

After all, the Cowboys lost Anthony Hitchens to free agency and none of the injury replacements had much success during the 2017 season.

Now just a couple of months shy of that week one match up with the Carolina Panthers, a battle for that middle linebacker spot appears to be occurring.

Former 2016 second round pick Jaylon Smith has seemed to find his health, and his movement skills and agility look like they did back when he was at Notre Dame. Whether or not these offseason hype videos will actually mean anything on the field remains to be seen, but just the fact that Smith is working out and playing without the knee brace is obviously a good sign.

Unlike Vander Esch, Jaylon Smith did play for the Dallas Cowboys a year ago. Sure Smith had his share of growing pains, but he seemed to find his groove late in the season. It probably isn't a coincidence, though, that Smith's best games came when coming off the bench in a limited role and when playing beside veteran Sean Lee. 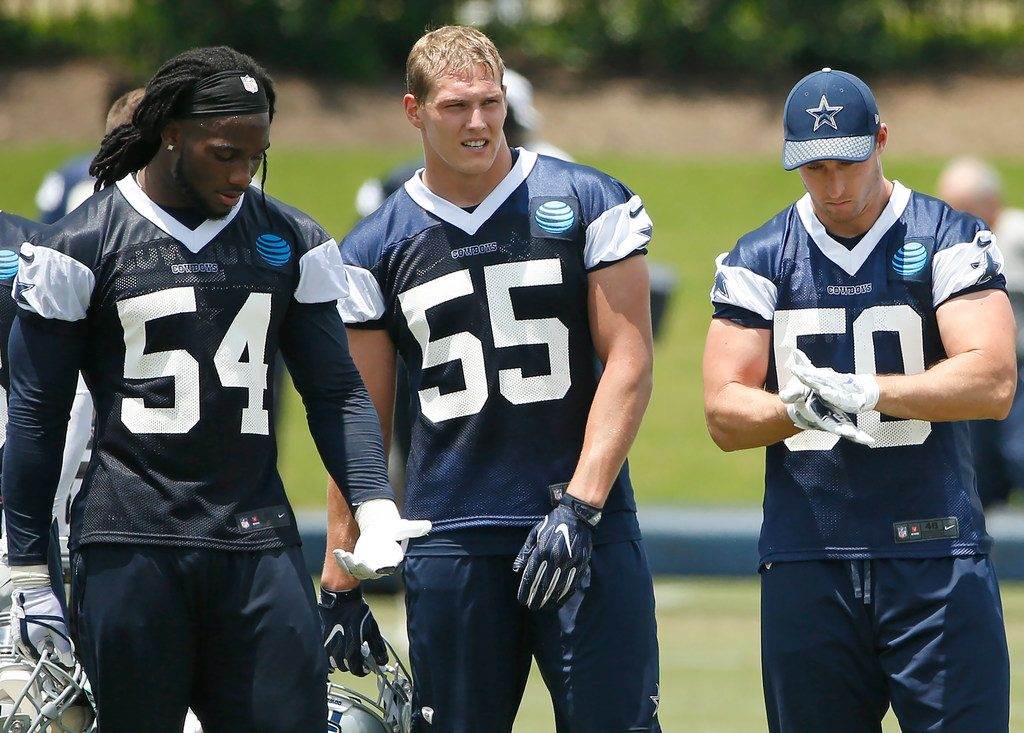 During the offseason activity thus far Jaylon Smith has gotten the majority of snaps at middle linebacker, but Vander Esch has also been sidelined with an injured ankle. Leighton Vander Esch clearly fits the mold of a MIKE both physically and athletically, but at his best Jaylon Smith does as well.

Despite the resurgence of Jaylon Smith and the injury to Leighton Vander Esch, I still do expect Vander Esch to snag that MIKE role moving forward. While showing glimpses of productive play, Smith did not impress enough to earn him the unquestioned starting job last season, and may best fit as a SAM backer and situational pass rusher/blitzer in the current scheme.

Allowing Jaylon Smith to conserve his energy and provide a boost off the bench is the best way for the Cowboys to structure their defense. Of course, this is only true as long as Vander Esch becomes the player they expect him to be, though.

If Jaylon Smith does return to the player he was at Notre Dame prior to his horrific injury, the Cowboys will possess three incredibly rangy, athletic, and talented linebackers on their roster.

Of course, that if is a very big if at this point, however.

Kevin Bradyhttps://kevinrobertbrady.wordpress.com
Die-hard Cowboys fan from the Northeast, so you know I am here to defend the 'boys whenever necessary. Began writing for a WordPress Cowboys Blog, and have been with ITS since 2016.
Previous article
Cowboys 2018 Preview: Which Offensive Starting Jobs Are Open?
Next article
Is Cowboys ST Coordinator Keith O’Quinn Facing Most Pressure for New Coaches?

#1-
Jaylon has NFL experience & in Dallas’s scheme LVE doesn’t
#2-
Regardless if Smith’s reasons for taking all the 1st team snaps, he wasn’t held back for any concerns
#3-
The huge if’s concerning LVE,,, he’s simply unproven aside his potential

So actually this title makes more rational sense as “Can LVE challenge LB Jaylon for the starting job? ”

In a prove it league, if LG Conner Williams can’t be penciled in how then can one pencil in LVE prematurely when he was drafted for Hitchens & Lee’s backup, (insurance), and/but Jaylon was drafted to replace Hitchens

Wilson, Durant, or Kilber should have been used IF they truly were trying to ease Smith back in & not expose him to be exploited

Overall Jaylon persevered thankfully & we need LVE to thrive if course but principle should always be applicable to all
LVE isn’t a Roquan Smith, Chubb-type draftee, he had concerns coming in, even without injury

He must unseat Jaylon, or anyone else
Nothing’s given in this league

On early downs they all need to be on the field of course. I always saw Lee as the MLB and Smith as an OLB, but those darn coaches never seem to listen… ;^)

LVE looks athletic enough for any of the 3 spots & I agree that they will probably put him at MLB. If Smith is fully back, much rather he stay in for long downs and let Lee get the rest.

Should Smith be tried out as a monster SS with speed, and it works, I’m not going to get on here with any told-you-so’s… ;^)