When people consider whether the Dallas Cowboys should trade for Seattle Seahawks’ Safety Earl Thomas, one rebuttal fans throw out there is his age, and for good reason. People get concerned about handing out contract extensions to players entering their age-29 season.

In the salary cap era of the NFL, it typically isn’t good business to pay age as the team often doesn’t get the value out of the player that the contract expects.

One position where I feel that isn’t necessarily the case is at the safety position. Let’s consider Earl Thomas’ accolades for a moment and see if we can find some correlations.

Earl Thomas, in his eight-year career, has been to the Pro Bowl six times, missing out his rookie season and in 2016 when he only played 11 games. He’s been selected to the NFL All-Pro’s first team three times in consecutive years from 2012 to 2015.

So, let’s go over to our friends at Pro Football Reference and see which other safeties have been to the Pro Bowl at least six times and have been selected as a first team All-Pro player three times. 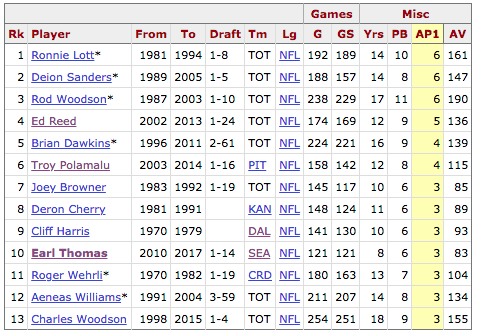 The first thing you’ll notice is the elite players on the list along with Earl Thomas. The likes of Rod Woodson, Ed Reed, Brian Dawkins, Troy Polamalu, Aeneas Williams, and Charles Woodson. Those are just the players whose career extended into 2000s.

Then if you consider Ronnie Lott and Cliff Harris, that’s some amazing company.

I know Deion Sanders is on the list, and he’s only there because he did play some safety toward the tail end of his career, but we know that it was as a corner that Deion made his money. The key though is that Deion’s switch to safety at the end allowed him to prolong his career.

Removing Earl from the discussion for a moment, the average length of the careers of the men mentioned above was 13.41 years. The longest career was Charles Woodson at 18 years followed by Deion at 17 and Brian Dawkins at 16 years. The shortest careers were the 10-year careers of Cliff Harris and Joey Browner.

Considering that half of the players listed above all played longer than the average, there’s a good chance that Earl Thomas has another six to seven years left in his career.

So, when we think about an extension for Earl Thomas, we have to consider the fact that for someone who has had the career that he’s had to this point, he’s going to be able to play at a good to great level for the life of a four-year extension.

Earl Thomas is an elite player and is on track to one day be considered for the Pro Football Hall of Fame.

If the Dallas Cowboys could add that to their young and developing defense for the next four years, they shouldn’t worry about his age.

Obviously, anything can happen, and people may point to him missing games in each of the last two seasons, but prior to 2016, Earl Thomas played and started 100% of his team’s games. That’s a six season stretch of being available for every single game.

For a team that is really close to contention and has the makings of an elite defense, Earl Thomas could be the missing piece that could put them over the top, much like Charles Haley did for the Dallas Cowboys’ dynasty of the 1990s.

Don’t let the age thing distract you from adding one of the best safeties in the NFL and one of the best players in the league. Earl Thomas to the Dallas Cowboys just makes too much sense not to do it, and for the All-Pro safety, age is just a number.