A few years ago we saw how a lack of firepower at wide receiver stifled the Cowboys' offense. The position is a focal point of almost any offseason, but especially in 2022 as Dallas deals with departed talent and other concerns going into training camp.

Amari Cooper was traded for cap space and a pittance in draft compensation from the Browns. Maybe Matt Waletzko (acquired using the pick from Cleveland) will one day become the gold standard for offensive tackles in the NFL but it's hard to see the Cowboys ever getting the upper hand in that deal.

Cooper was the guy that Dallas traded for in 2018 to give its offense a much-needed boost. Cole Beasley and Terrance Williams weren't cutting it, unsurprisingly, and adding Amari seemed to finally take the lid off the passing game and helped the Cowboys push their way into the playoffs.

The cupboard isn't nearly as bare in 2022 as it was going into that season. CeeDee Lamb has bonafide WR1 talent and Michael Gallup has arguably been Dak Prescott's most-effective target since his arrival. They are a much stronger one-two punch than Beasley and Williams were; a legitimate starting duo for a contender.

Unfortunately, Gallup may not be ready to play in September. His recovery from a torn ACL could linger into the start of the regular season and put Dallas' WR depth to the test.

This adds some sting to another free agent departure in Cedrick Wilson. It will put additional attention on how well new faces like James Washington and Jalen Tolbert integrate with the offense; one of them potentially starting early and both likely to get ample targets throughout the season.

There's rarely a time when the WR position doesn't provide some measure of drama. But this year, Dallas' season may very well hinge on the way some of these stories and battles play out.

Between Cooper's exit and the expectations of his own third-year development, Lamb will be under intense scrutiny in 2022. The latest entrant to the #88 Club has what it takes to be the team's top receiver and may even be underrated now by the greater NFL community. But now CeeDee will face a firing squad for every drop or any game where his production doesn't jump off the page.

The pressure will be turned up in September if Michael Gallup misses time. Dallas' decision to trade Amari while re-signing Gallup was a stunner last spring but there's denying that Gallup has a special chemistry with Dak Prescott. More often than not it's Gallup who gets targeted in a clutch moment, trusted to make a contested catch or to contort himself in whatever way is needed to finish the play.

Coincidentally, James Washington was selected 21 spots before Gallup in the 2018 NFL Draft. While he never became a full-time starter in Pittsburgh, Washington had his moments and was possibly a victim of the QB situation there the last several years. James' fresh start in Dallas could be one of the underrated moves of the offseason if his talent finally has a chance to come through.

Just like Gallup or Terrance Williams before him, Jalen Tolbert was drafted in the 3rd round last April. This year they only need the rookie to be Cedrick Wilson; a capable backup with production potential when called upon. Eventually, though, Dallas would love to see Tolbert step into a larger role the way Gallup and Williams did.

Noah Brown's still here and you're probably not sure why. But the Cowboys keep re-signing him to one-year deals for special teams value and situational work as a blocker at WR. While easy to dismiss now after five years, Brown's experience in the system and with Prescott could make him a sleeper for a larger role early in the season.

Speaking of sleepers, last year's 5th-round pick Simi Fehoko feels somewhat forgotten now after the arrivals of Washington and Tolbert. But while a loaded WR depth chart kept him buried as a rookie, Fehoko's year of development could make him an underrated contender now as Cooper and Wilson's exits shake up the position.

Another potential sleeper is T.J. Vasher, the 6'5″ prospect out of Texas Tech. An undrafted free agent last year for Dallas, Vasher has been getting buzz this offseason for his development and performance during OTAs. If he's added enough technique and some value in smaller areas of the game, Vasher could at least push Noah Brown for a roster spot and perhaps even more.

We've already discussed seven names at a position that generally only goes five or six deep; bad news for the likes of Brandon Smith, Dontario Drummond, and other dark horse prospects. But WR is a spot that often breeds surprises at the bottom of the depth chart. Any of these guys, especially if they have special teams value, could force their way into the conversation. 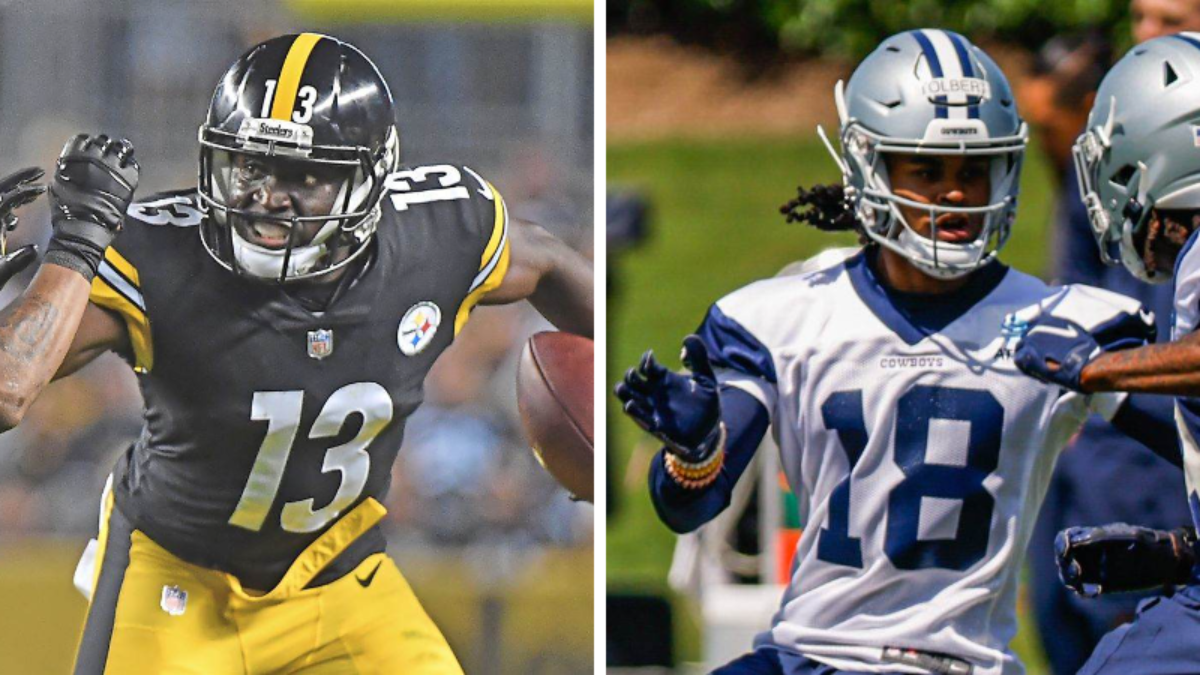 Between high stakes and how little we know at this point about either player, Washington and Tolbert's battle may wind up being the best from any position. And in the end, both could play large enough roles that they're both winners.

Not to belabor the point but Gallup's potential absence to start the year puts a huge spotlight on these two. One of them very well be WR2 for their first game as Cowboys; a far cry from the situation we've enjoyed the last two years with the “three-headed monster” of Cooper, Gallup, and Lamb.

But while the WR depth chart may not be as scary to opposing defenses as it's been, we learned from Cedrick Wilson's play last year that productivity isn't just reserved for former Thursday and Friday draft picks. But with both Washington and Tolbert being 2nd and 3rd-round picks respectively, we shouldn't be overly fearful of their ability to perform.

Even after Gallup returns or if he doesn't miss time at all, WR3 is still a critical component of any offense. The third receiver generally gets far more snaps than a fullback or the backup TE; the true 11th man in the modern football era. So this battle still has tremendous importance even if the starters never miss a game.

James Washington's experience could be critical here given the early-season fears about Gallup. He's started 25 games for Pittsburgh in the last four years and was the team's leading receiver in yards in 2019. While he may not have clicked with Ben Roethlisberger much during this run, perhaps a change of scenery and QB will give Washington a better opportunity.

Experience will only go so far, though, if the rookie hits the ground running. Jalen Tolbert was seen as one of the steals of the draft and is expected to contribute quickly. With Washington only here on a one-year deal, the Cowboys won't defer to the veteran if they see immediate signs that Tolbert can make an impact.

Jess Haynie
Cowboys fan since 1992, blogger since 2011. Bringing you the objectivity of an outside perspective with the passion of a die-hard fan. I love to talk to my readers, so please comment on any article and I'll be sure to respond!
Previous article
#54, But Twice as Nice: It’s Chuck Howley and Randy White’s World, We’re Just Living In It
Next article
Countdown to Kickoff: Mark Stepnoski Takes “Center” Stage at #53

Looks like a very good WR group. Top two are starters on any other team, depth is good. Will see how the rookie does, and Washington may surprise in a good way. Overall, plenty of higher-level talent to work with.

It will all depend on if they can run the ball. Dak is very effective in playaction. These guys will struggle if the secondary can sit back force everything underneath

I don’t really think the Cowboys will miss Amari Cooper too much. He often disappeared in games and seemed disinterested most of the time. The guy that concerns me is James Washington. I wonder if he really wants to continue playing football. The Cowboys have had a lot of players that wanted to play and liked to play. Cooper, Washington, Tyron Smith, Trysten Hill, and Leighton Vander Esch are guys that I would question their desire and love for the game. Wouldn’t surprise me if James Washington doesn’t make this team.

On another subject, I think Randy Gregory’s going to burn the Denver Broncos sooner rather than later. They tried to sneak in and one up Dallas by signing him. Already he’s on the injury list. They tried the same stunt with drafting Patrick Surtain ahead of Dallas, only to leave the Defensive Rookie Of The Year for Dallas. Really wanted Surtain, but what a nice parting gift we got with Micah Parsons.