Dak Prescott saw his 2020 season end after just five games due to a compound fracture and dislocation of his right ankle. Naturally, an injury of that magnitude will make any player cautious going forward, especially a franchise quarterback who inked a four-year, $164 million extension.

Prescott threw for 330 yards and four touchdowns in the Cowboys' Week 16 blowout of the Washington Football Team which led to him being named NFC Offensive Player of the Week. However, one of the biggest takeaways from his performance was that he looked more aggressive when it came to using his legs, and he mentioned earlier in the week that he won't hesitate to do so going forward.

“If there's an opportunity to run, obviously this back part of the season, heading into the playoffs, everything matters,” Prescott said. “So I'm playing that way. I'm preparing that way. If those running lanes are there — obviously I'm still going to be smart in taking the contact and those types of things — but yeah, when it's needed, when the lane's there, I'm not going to hesitate.”

It was going to take time for Prescott to be fully comfortable running with the football as easily as he did before his devastating injury. Slowly but surely, Prescott's confidence has come back and he attributes the time he's spent being smart with his body to getting him to the point he is now when it comes to gaining yards using his legs.

“I just think it comes from a lot of months of taking care of my body, prehabbing, rehabbing when injuries came up, but in the same sense, staying ahead of everything and making sure that my leg is positioned the right way, my body feels great and doing all the little necessary things, and different modalities that I have in place to make sure that I'm feeling the best that I can in the latter part of the year,” Prescott said. “And I feel fortunate and blessed to be feeling as well as I do this late in the year.”

Prescott had at least 277 yards rushing in each of his first four seasons before gaining just 96 in 2020. He's currently at 126 yards for this season so it's highly unlikely that he reaches that floor in the last two games. However, the fact that he's willing to use his legs more and pick up first downs will be critical once the playoffs roll around and passing plays break down.

Dak needs to hit his receivers with accuracy, instead of the shit he’s slinging to them. Maybe win one playoff game at most!

Prescott needs to use his legs to hold the Linebackers in place!! Run, Run Ezekiel and Pollard to open up the Defense up!!! Use the recievers and tight ends to break up the Secondary up too !! Going to see how good the Defense is !!! 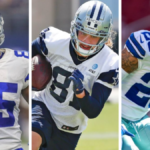 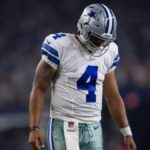