This past Sunday, the Dallas defense had one of its best performances in recent memory. Their balanced dominance over Washington, with big moments coming from a variety of players, signaled the rest of the NFL that the Cowboys are no longer a one-sided team.

If anything, defense was the only reason that Dallas got this crucial NFC East win. It was the defensive effort that built a 24-0 lead by halftime and enough cushion to absorb some second-half issues. With a stagnant offense only producing one touchdown and Dak Prescott throwing a pick-six late in the game, the defense's earlier work and a sack-fumble by Randy Gregory were the keys to victory.

Throughout this season Cowboys fans have uttered varied forms of the same sentiment; “just wait until we get all of these guys on the field together.” Well, this game was the long-awaited debut of the full defensive cast. With Neville Gallimore playing in his first game of 2021, Randy Gregory returning from injury, plus DeMarcus Lawrence playing in just his third game of the year, this was what we've been waiting for.

Of course, Micah Parsons was out there doing Micah Parsons stuff. The assumed Defensive Rookie of the Year, legitimate Defensive Player of the Year candidate, and the rookie drawing Lawrence Taylor comparisons once again starred on a day when there were plenty of standouts to be found.

But one could make the case that Randy Gregory was even more impactful. After all, it was Gregory who had two takeaways with his interception early and the aforementioned forced fumble that ended Washington's final possession.

What a glorious problem to have; debating which defensive playmaker contributed more to a victory. That's a problem the Dallas Cowboys haven't had too often over the last several seasons.

No, for a long time we've been bemoaning the lack of consistent defensive solvency to compliment a competitive offense. Defensive letdowns have been mostly blamed for both Tony Romo and Dak Prescott's lack of postseason accomplishments.

While one big day against a 6-6 team certainly doesn't absolve all of that, it at least provides hope that this fully-assembled 2021 defense won't be the problem if the Cowboys fail to deliver.

Seeing Parsons and Gregory duel for the gameball on defense is a delightful sight and a real problem for opposing playcallers. And then seeing guys like Lawrence, Gallimore, Dorance Armstrong, and even Leighton Vander Esch stepping up and contributing creates a threat level that we haven't enjoyed often.

Remember, Dallas allowed just 29 yards and zero points in the first half of a road game against a division rival. And before you just write it off as typical Washington ineptitude, also recall that this team had won four in a row and taken down Tampa Bay before the Cowboys came to town.

While many are rightfully coming away from this win concerned about Dak Prescott's recent erraticism and the general ineffectiveness on offense, don't bury the lede on what this defense showed you. Parsons, Gregory, and the gang stole the show and were the heroes in a game with significant postseason stakes.

Now, it's up to the offense to make sure they're not the liability come January.

Maybe Dak was just shaky from having to go against the whole first team defense during the week? I hope thats it because I’d hate to think he’s taking up smoking crack!

And WFT came into this game with a mission, not only so they might could get the division, but also to humble mr. MMC after he guaranteed a W

The D played great, Daks just gotta play better, and that isn’t too much to ask of a 40 mill QB

This defense has come together at the right time, getting ready for the play offs! The offense will show up, trust, believe, and wait! 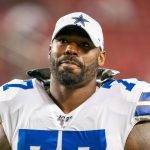 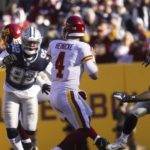