The Dallas Cowboys had several holes to fix coming into the 2020 season. With the departures of Byron Jones and Jeff Heath, the cornerback and safety positions catapulted to the top of the Cowboy's priority list.

This season has seen two young defenders in the secondary rise to the occasion. Rookie Trevon Diggs and second-year stud Donovan Wilson have taken full advantage of their roles within the Cowboys defensive scheme and are showing that they're cornerstone pieces for the secondary to build on. 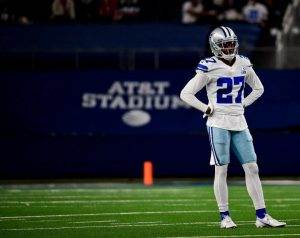 After the Cowboys added more firepower to their aerial assault with CeeDee Lamb in the first round of the 2020 NFL Draft they followed it up by taking Diggs with the 51st overall pick in round two. Diggs came to Dallas not only as one of the best cornerbacks in the draft but he also got experience playing the wide receiver position during his days at Alabama, providing him with excellent ball skills.

The expectation was for Diggs to come in and fill the void left by the aforementioned Jones. Not one to shy away from the spotlight, Diggs was focused on taking over the CB1 spot in Dallas, as he mentioned back in July.

Diggs did just that and would get his opportunity to showcase his skills against some of the league's best receivers like Julio Jones, D.K. Metcalf, and Odell Beckham Jr early in the season. Predictably, Diggs had his fair share of struggles, but also showed a relentless desire to compete and mental toughness to put bad plays behind him.

Starting in Week 5 against the New York Giants, Diggs came into his own and started to establish himself as the Cowboy's top corner. Over a five-game stretch, Diggs racked up 22 tackles and eight passes defended. He also had his best performance as a pro during this span against the Philadelphia Eagles in Week 8 when he registered four pass deflections and his first two interceptions as a pro.

His rookie campaign would take a hit the very next week against the Pittsburgh Steelers when he suffered a broken foot. With a 4-6 week timeframe for recovery, many thought Diggs might be on the shelf for the remainder of the season. However, the promising young talent was activated off of injured reserve on December 19 just ahead of the Cowboys matchup with the San Francisco 49ers. He picked up right where he left off with five tackles and a pass defended in the Cowboys 41-33 victory. 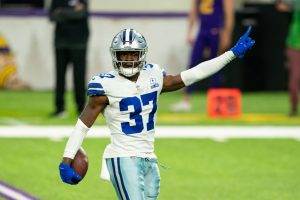 The ascension of Wilson was supposed to happen in 2019. Selected in the sixth round out of Texas A&M, he joined the Cowboys secondary with experience not only at safety but nickel cornerback as well. He didn't waste any time making an impact as he led all defensive backs with three interceptions during the preseason.

Wilson had put himself in a position to challenge to aforementioned Heath for the starting strong safety spot opposite Xavier Woods. Unfortunately, Wilson suffered an ankle injury just before the start of the season that derailed his rookie campaign. He appeared in 11 games but mostly on special teams and recorded a pedestrian two tackles in only 16 defensive snaps.

It appeared that 2020 was shaping up to be another rocky year for Wilson. The team signed veteran Ha Ha Clinton-Dix in free agency to fill the safety void, but after being passed up on the depth chart by Darian Thompson he was released on September 3. Thompson struggled to make an impact also and was replaced by Wilson in the starting lineup in Week 5 against the New York Giants, and the former Aggie has taken full advantage.

Wilson would display his skills against the pass and his willingness to provide support in the run game racking up 51 tackles, three forced fumbles, and a fumble recovery over his first seven starts.

The highlight of this stretch was his Week 11 performance against the Minnesota Vikings. Early in the first quarter, Wilson and DeMarcus Lawrence combined to sack Kirk Cousins, but Wilson also came away with his second strip-sack in three games (had one against the Eagles in Week 8). The most memorable play came just before halftime. Wilson looked like a heat-seeking missile when he blasted Dalvin Cook to force a fumble.

Hello Donovan! Donovan Wilson has the ability to make things happen, it does appear. These two strip sacks in three games indicate he is potentially more than just a heavy hitter in the secondary. pic.twitter.com/VN4dtXz4hI

This Donovan Wilson hit was unreal.

Willson would be hit with a minor setback after suffering a groin injury during the Cowboy's loss on Thanksgiving to the Washington Football Team. He would miss two games before returning against the San Fransisco 49ers in Week 15 where he recorded his first career interception to go along with eight tackles and two passes defended.

The Cowboys secondary has been a weak spot for quite some time. At only 23 and 25 respectively, Diggs and Wilson give the back-end of the Cowboys defense an immensely bright future.

Matthew Lenixhttps://mlenixsctx.wordpress.com/
I write dope stuff about the Dallas Cowboys and what not.
Previous articleJalen Hurts and Miles Sanders Will be a Problem for the Dallas Cowboys
Next articleEagles DT Fletcher Cox Injured, Missing Practices Ahead of Cowboys Game

Dak Prescott's hand injury is getting all the attention today but QB1 wasn't the only starter knocked out of action last night. Left Guard...
Read more

These two are very good young pieces, we need to add to the puzzle with a 1st rd CB, Surtain is my pick. I just hope we can bring in Simmons from Denver to add to the mix. Woods and Awuzie has bn less than average at best. Time will tell

Are you actually watching the games? Diggs has been burnt all year, including on the 2 int against the Eagles. Hopefully he has a bright future, but let’s not go overboard.