The NFL Scouting Combine — beginning this week from Indianapolis — is a valuable piece to the yearly puzzle that is the Draft cycle. It won't be long until many of these prospects are put in their rightful places on draft boards everywhere, based on their testing numbers and interview ability.

Missing this Combine information has not stopped many outlets from putting out mock drafts, many of which I've compiled in my weekly series.

Let's take a look at three prospects that have been linked to the Dallas Cowboys in the first round of this 2018 NFL Draft, and why the team should avoid drafting them.

The Cowboys doubling up on Michigan defensive linemen in the first round of the draft is by far the most popular prediction in mock scenarios right now. Maurice Hurst has a high enough floor with his NFL-ready size and strength to at least be a safe pick for any team, but I don't believe he significantly upgrades anything about the Cowboys' defense.

The Cowboys would be best served retaining RFA David Irving to play this 3T position, along with trusting their depth at defensive tackle. A first-round DT that I currently have graded in the second round would not be a great use of assets when it comes to the Cowboys at 19th overall.

Hurst is not consistent enough in his ability to use his power and rush abilities to get off of blocks and pressure the quarterback.

I do firmly believe the Cowboys should be in the market for a new starting left guard, and this is a position worthy of the 19th overall pick. Given how well this team has evaluated OL talent though, drafting a true guard in the first round and following up with a swing tackle later on would be the better idea.

Wynn transitioned multiple times in college from LT to LG, bringing the same tenacity and solid technique to both positions. Wynn's body type almost guarantees that he will be a guard in the NFL though – leaving the Cowboys with better interior OL options at the start of their draft (Will Hernandez). 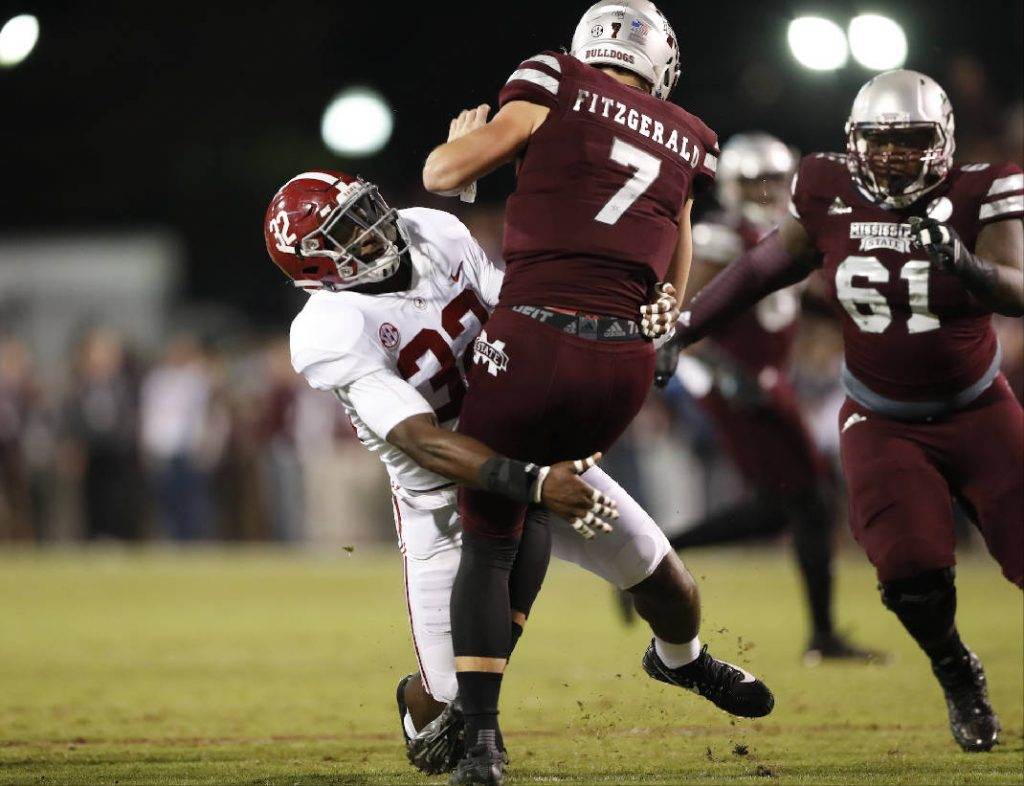 The Cowboys will have a need at LB if free agent Anthony Hitchens signs elsewhere. With Sean Lee and Jaylon Smith finally expected to play alongside each other though, this need shouldn't exist in the first round.

Depth can be found at LB throughout this 2018 class, making Roquan Smith and Tremaine Edmunds the only players I would consider with pick #19 at this position. Additionally, I've graded Evans as a third round player.

While there is plenty to like about this prospect, with the way he gets to the ball and plays with great awareness, my concern is that the rest of this NFL-level Alabama defense covered up for enough of his weaknesses.

Evans is just one name to keep in mind for the Cowboys to add needed depth at LB, but should be too “expensive” for this team if he performs exceptionally well at the Combine and garners further first-round buzz.

Whether or not these three prospects continue to be considered options for any team in the first round of the 2018 NFL Draft remains to be determined by the Scouting Combine. From there, the Cowboys will move on to compile their list of players taking visits to The Star (of which each team gets 30 of), focusing in even further on whose name will be called in Dallas for America's Team.

For the sake of getting this team back on track towards the playoffs, with ten total picks to add to an already talented roster, let's hope these three prospects are passed on if given the chance by the Cowboys.

Most of the 2018 NFL Draft class is heading into their fourth seasons, and for most of those the final year of their original...
Cowboys News

With their second selection in the fourth round of last year's NFL Draft, the Cowboys looked to find a tight end to hopefully fill...