Cowboys Draft: The Case Against A 1st Round Wide Receiver

For much of the offseason Cowboys Nation has agreed on one thing: the Cowboys need to draft a wide receiver, and they need to do so early. This began to change when Dallas signed former Jacksonville Jaguars wide out Allen Hurns to a two year deal, and decided to keep veteran receiver Dez Bryant around for at least one more season (so it seems).

Dallas now has a rather crowded wide receiver room, and adding another body to that depth chart through the draft seems a bit counter-intuitive. Considering their lack of talent and a few of disposable contracts on the roster, however, drafting a wide out is still the smart move.

The Cowboys have to bring in a young receiver to complete this core. And, based on their 30-visits and pro day appearances, it's clear the Cowboys' front office agrees with this assessment. While all of this is true, drafting one of these receivers in the first round would be the wrong move.

First of all, this is a deep receiver class. Ever since Calvin Ridley's disappointing combine performance, it seems like everyone has a different “WR1,” and the difference between WR5 and WR12 isn't too stark.

Because of how deep this class of wide outs is, it is very likely the Cowboys can find a difference making receiver in the second round. And, to be quite honest, finding their receiver with the 81st overall pick wouldn't be too shocking either.

Then there is the issue of what first round receivers tend to be. Below is a list of every wide receiver taken in the first round of the NFL Draft since 2011, and outside of a few names it isn't a very impressive list. 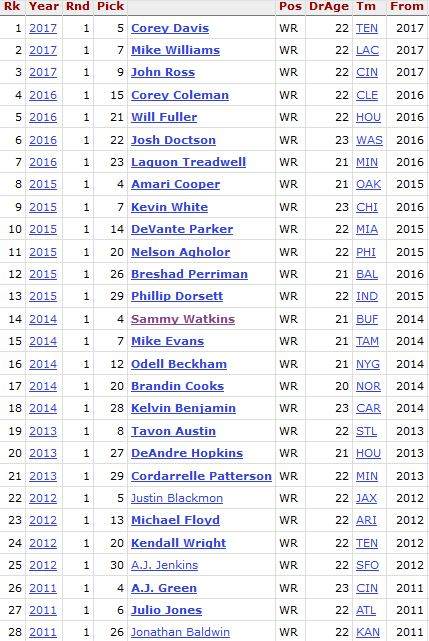 The moral of the story? If the wide receiver prospect isn't what you would call a “can't miss,” he probably isn't worth a first round pick. Pass catchers are certainly important to an offense, but similar to running backs, they aren't as important as quarterbacks and line of scrimmage players.

In a draft class such as this one, waiting until the second round to address your wide receiving needs is most likely the smart play. This will allow the Cowboys to fill their more critical left guard or defensive tackle hole in round one, while allowing the board to sort out this crowded bunch of wide receivers.

Then the Cowboys can jump on the wide out they like most, and add a contributor to their receiving room.

After all, there most likely aren't any Odell Beckham or Julio Jones-type players in this class, so taking one in the first round should probably be avoided. Especially after you just added Allen Hurns to your roster.

Kevin Bradyhttps://kevinrobertbrady.wordpress.com
Die-hard Cowboys fan from the Northeast, so you know I am here to defend the 'boys whenever necessary. Began writing for a WordPress Cowboys Blog, and have been with ITS since 2016.
Previous article
How Will the Loss of Anthony Hitchens Impact the Cowboys’ Season?
Next article
QB Dak Prescott Addresses “Hate” Via Instagram

Our receiver corps didn’t hold our team hostage last season. No quality depth at LT, and LB did. We should stay the course and go for our most pressing needs.

Keep in mind that you draft in the 1st round to get a 5 year player. Just because the WR room is crowded today, doesn’t mean that is the case next year. Next year Cole is a UFA, so is Thompson. Hopefully Dez and T Will are replaced by either Hurns (who will be in the last year of his deal) or a WR drafted this year.

So having said that, yes there are quality WRs there in rounds 2 and 3. Would LOVE LOVE LOVE, James Washington in the 2nd or Donte Pettis in the 3rd.

Very good points, Chuck. I’m still hoping they snag Wynn 19th overall myself, but trading back to acquire more picks (and possibly still landing Hernandez) would be a fantastic move.