The Dallas Cowboys didn't have a good November but you can't blame Micah Parsons. The linebacker and defensive end has been on a tear over Dallas' last four games, enough that he was just named the NFL Defensive Rookie of the Month.

While the Cowboys went 1-3 in their November games, Parsons did everything he could as the team's top player in the trenches. With Randy Gregory missing the last three games and DeMarcus Lawrence being out since Week One, Micah had 6.5 sacks over the last month in addition to other big plays.

Ranking 10th in the league right now with nine total sacks in 2021, Parsons may see his high production rate go down as Lawrence and Gregory make their anticipated returns. Micah will likely start playing more at his original role of linebacker and not getting as many pass-rush opportunities.

Nevertheless, Parsons' resume to be the Defensive Rookie of the Year is already well established. He can still have a tremendous impact from the LB position, like we saw a few weeks ago in Minnesota, and that will likely be on display tonight as he tries to contain Saints QB Taysom Hill.

Congratulations to Micah Parsons for this well-deserved recognition! 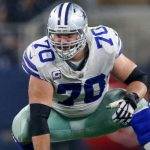