The Dallas Cowboys have an embarrassment of riches at the linebacker position. In 2018, Jaylon Smith and Leighton Vander Esch established themselves by many as the best linebacker duo in the NFL. Smith, had 121 tackles and Vander Esch had 140 tackles as a rookie en route to garnering Pro Bowl and All-Pro honors. That lead to the Cowboys finishing fifth against the run and seventh in overall defense last year. Expectations were very high coming into the 2019 season for this pair of young superstars, and even with a somewhat slow start for the two of them, both are on pace for Pro Bowl seasons.

This season had been a little bit of an adjustment for Smith. He's been used more as a pass rusher in large part due to the absence of Defensive Tackle Antwaun Woods who suffered a knee injury in Week 2 against the Washington Redskins. The Cowboys have been lining up in a 3-3-5 defensive set using Smith as the fourth pass rusher because of this. So with that being said, it's taken some getting use to for him but he's still producing at a high level. After only 6 tackles against the New York Giants, he's totaled 30 tackles in the last three games, ten per game. If he continues at this rate he'll finish with 144 tackles which would be 23 more than a season ago. Make no mistake about it he's still playing good football.

Vander Esch was a much-maligned selection in the 2018 NFL Draft. However, it didn't take long for people to come around as he lead the entire team in tackles. This season started off fast with 10 tackle performance against the Giants. The next two games we're a struggle for him, though, with only 11 tackles total against the Redskins and Miami Dolphins. Last Sunday in New Orleans, Vander Esch was back to form with 11 tackles (10 solo) as he and the Cowboys defense shut down the Saints offense to the tune of 12 points in a tough two-point loss. Right now, he's on pace for around 130 tackles on the season, just slightly off of his 140 tackles from 2018. It's been an up and down four games so far but he's still on track for another big year.

The Cowboys are only allowing 14 points per game entering Week 4 which is good for fourth-best in the NFL. Also, the Cowboys currently rank seventh in total defense, which is exactly where they finished a year ago. Smith and Vander Esch are once again leading the charge as the defenses top two tacklers. If this continues, and I have no doubt it will look for the Cowboys to have multiple Pro Bowl linebackers in 2019. 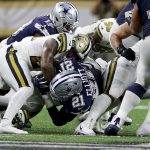 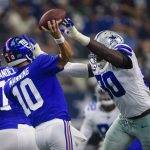