After one of the biggest passing days in his entire career, Dak Prescott was named the NFC Offensive Player of the Week for Week 11 of the 2019 season. His performance helped the Dallas Cowboys win a crucial road game over the Detroit Lions.

This is Dak's second time winning the award in his career. The last time was also in the 2019 season, going back to Week 1.

After throwing for 444 yards, 3 TDs, 0 INTs and posting a 116.6 passer rating at Detroit, Dak Prescott has been named NFC Offensive Player of the Week

Prescott's 444 passing yards were the third-most of his career and just short of his career-high of 463 yards. However, it was his most productive day as a passer without throwing an interception.

This game established Dak as the current season leader in passing yards for the NFL. He is tied for second in touchdowns and ranked 8th in passer rating as of Week 11.

I'm sure all of Cowboys Nation joins me in congratulating Dak Prescott for this well-deserved honor!

Cowboys will defense is swiss cheese and Dak will throw a six pick.
Another slow start for the Cowboys offense.

I’m guessing there is no Mrs. Football. 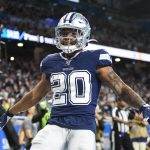 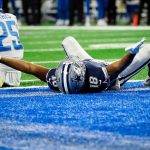