Where the Dallas Cowboys lost starters on offense this offseason in Wide Receiver Dez Bryant, Tight End Jason Witten, and Left Guard Jonathan Cooper, they hope to have made up for it with reinforcements along their league-best offensive line. The foundation of a team that will welcome back Ezekiel Elliott for a full season, the Cowboys OL has not looked this good (from top to bottom) on paper in a long time. As the Cowboys enter OTAs, the team has swapped out backup Offensive Tackle Jarron Jones for Guard Damien Mama.

Damien Mama signs with the Cowboys after spending 2017 with both the Kansas City Chiefs and New York Giants. A UDFA addition for the Chiefs that earned a practice squad position out of USC, Mama was snatched up by the Giants but waived earlier this month.

The Giants believe they found a long-term option at guard with this year's 34th overall pick, drafting UTEP's Will Hernandez. The Cowboys feel the same way about another Texas player – keeping Connor Williams close to home at 50th overall. With Williams and Zack Martin, both starting guard positions on the Cowboys are secured, along with Center Travis Frederick anchoring the unit.

Rounding out this stellar offensive line is of course Tyron Smith at left tackle and La'el Collins at right tackle. The cohesiveness and versatility from these starting five linemen is truly unrivaled across the NFL. Helping the Cowboys further enjoy their embarrassment of riches up front is Joe Looney, Marcus Martin, Chaz Green, and Cameron Fleming.

All four backup players have starting experience. The Cowboys can't afford to expose third-year Quarterback Dak Prescott to the pressure he faced without Smith or Cooper in the lineup, which is why players like Martin and Fleming were brought in through free agency. 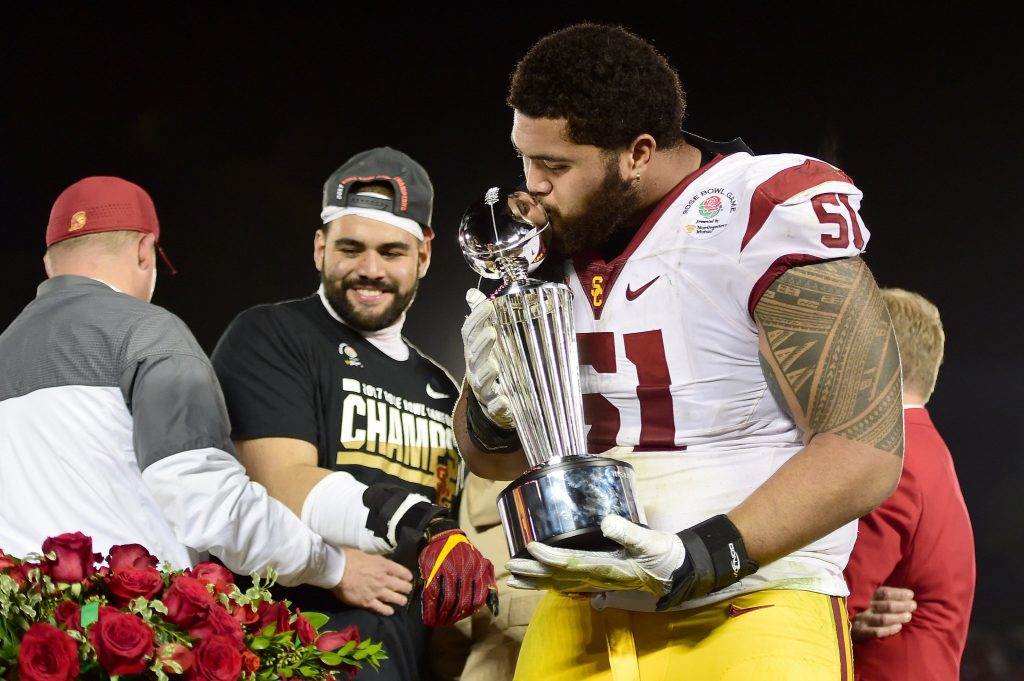 It is going to be incredibly difficult for Damien Mama to find his footing in this league with the Cowboys. Earning a contract with the team out of a large group of recent workout players is a great first step for Mama though. Always possessing the traits and raw size to play at the next level, Mama saw his USC Trojans shuffle through multiple OL coaches during his three seasons in the Pac-12.

This inconsistency hurt Mama, and it is something he won't have to deal with under Paul Alexander in Dallas. At least as of May 22nd, with 90 players to work with, the Cowboys appear committed to being incredibly versatile on offense in 2018.

Perhaps making up for one of their perceived weak spots at TE with additional depth along the line will give Mama a fighting chance to compete with Joe Looney as the Cowboys “Jumbo” player. With Looney being re-signed prior to the Cowboys also adding veteran Guard Marcus Martin though, Mama understandably has his work cut out for him.

The Cowboys will have plenty of difficult roster decisions to make this summer. Fortunately, they've replenished their offensive line to the point where talented players will miss the cut. Whether or not this applies to Dallas' newest addition in Damien Mama remains to be seen, as the California native will undoubtedly impress in pads out in Oxnard.