Few teams in the NFL could absorb a loss like the Dallas Cowboys suffered when Wide Receiver Michael Gallup was lost for the season with a torn ACL in Week 17 against the Arizona Cardinals. However, the Cowboys have a lot of talent at wide receiver and one in particular, Cedrick Wilson, is more than capable of handling the load.

Coming into the Cowboys' season finale against the Philadelphia Eagles, Wilson was set to go back to being the team's third option at wide receiver. Wilson stepped up and delivered with a career-high 119 yards and tied a career-high with two touchdown receptions in the Cowboys 51-26 annihilation of the Eagles.

Saturday night wasn't the first time this season that Wilson has come up big. In the Cowboys' Week 6 overtime win against the New England Patriots, Wilson caught a crucial fourth-down pass late in the fourth quarter that kept the drive alive and led to the game-tying field goal. A week later against the Minnesota Vikings, Wilson picked up 84 yards and a touchdown and even completed a 35-yard pass to CeeDee Lamb. On Thanksgiving with Amari Cooper out due to COVID and Lamb out with a concussion, Wilson amassed 104 yards on seven receptions albeit in a three-point loss to the Las Vegas Raiders.

The four-year veteran spoke about how productive the Cowboys can be through the air when they are hitting on all cylinders.

“We can put up big numbers if we're all snapping,” Wilson said. “We have a few guys that don't even get touches, and they were part of the offense as well. It goes to our preparation in practice, when everybody gets in, and when we can roll it over into the game.”

Wilson will be an unrestricted free agent in the offseason and so will Gallup. Of course, the Cowboys will try to bring Gallup back and they should. However, with how well Wilson has performed, and his much smaller price tag, losing Gallup is something the Cowboys can deal with if that's the case.

Gallup is the better player between himself and Wilson, no one who is smart would argue that. Sometimes though, a certain player may fit what a team wants to do a little more even if another player may be on a higher level. Wilson is a true slot guy so when he's on the field Lamb slides to the outside with Cooper and that combination has looked more fluent for the Cowboys in 2021.

The Cowboys' have an embarrassment of riches at the receiver position. Losing Gallup this offseason would hurt a ton, but Wilson has established himself as someone Dak Prescott and the Cowboys can trust to be a great complement to Cooper and Lamb and keep the passing attack in Dallas as one of the NFL's best.

Well Well Well it’s good to see that your starting to see the light ML! Ha. I still believe that CW fits this offense and helps it as much if not better than MG! I realize that MG stretches the field better than CW but he is not as Versatile as CW in my opinion! I look at MG as a one trick pony where CW is a Swiss Army knife ! I’m thinking that at the end of the season we won’t be able to afford MG anyway so it’s probably not a bad thing that we don’t have him for the playoffs although I wished he hadn’t got hurt and was still able to play! Remember last week when MG went out how we were just playing flat then CW came in and we started scoring ? The bottom line is CW is a play maker if it’s not catching the ball then he can run reverses or throw the ball downfield !

See what light? Always been a huge Wilson

I’m glad Wilson has finally stayed healthy enough to show what he’s capable of. That’s been the knock on him. He showed excellent hands and route savvy from his first camp…then promptly got hurt. Showed well in his second camp…then got hurt. He kind of got lost in the shuffle after that as others showed out.

Gallup hasn’t stayed the healthiest, either.

I would love to see them both back, at the right price. Of the two, I’d rather see Wilson back as his price will be lower, and he’s more versatile, especially on trick plays.

I’m actually more concerned about re-signing Schultz than Gallup. I think he’s better than Jarwin and a lot more reliable.

The scary thing is, I think we’d be alright even if we lost both Gallup and Wilson. Malik Turner and even Brandon Smith have looked better than expected in their limited snaps. I also think T.J. Vasher has some serious potential if he gets healthy and his head together.

Noah Brown is a UFA and not a big loss other than maybe on ST’s. Simi Fehoko has potential, but was less than impressive in his limited snaps with drops and bonehead plays. He gets it together with a full year of work, and he may surprise as well.

Really, we are absolutely loaded at WR and with Dak’s, Zeke’s, Cooper’s and an under performing but still paid extremely well OL’s contracts, I really don’t see them being able to spend much on retaining Gallup and Wilson. 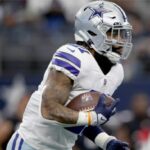 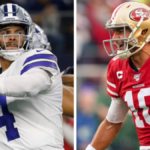