The Dallas Cowboys aired on the side of caution in their Week 8 matchup with the Minnesota Vikings. Despite Quarterback Dak Prescott looking great and showing no signs that he couldn't play during pregame warmups after rehabbing his injured calf, the Cowboys rolled the dice with backup Cooper Rush and the team pulled out a 20-16 win in the final minute.

With Rush performing the way did with 325 yards and two touchdowns, the rumblings of Prescott missing one more game to be on the safe side began. That's very understandable seeing as the Cowboys have 10 games left and are just a half-game back of the Green Bay Packers, Arizona Cardinals, and Los Angeles Rams for the top seed in the NFC. However, Head Coach Mike McCarthy expects Prescott to be a “full go” at practice on Thursday.

Prescott was asked after the Cowboys win if him returning for the team's Week 9 contest against the Denver Broncos was a possibility, and the two-time Pro Bowl selection didn't hesitate to yes.

“For sure,” Prescott said. “I was getting prepared to play this game. I’m a guy that takes it day-by-day, moment-at-moment, and right now, I’m going to celebrate this win with the guys and worry about rehabbing…tomorrow.”

The Cowboys made the right decision by giving Prescott an extra week to heal from his calf strain, and the fact that they were able to squeeze out a win in his absence speaks volumes about the resolve they have as a team. With two straight home games on the horizon for the Cowboys, it appears that there's a great chance Prescott will be back under center for both.

With the lowly Broncos and Falcons coming up, i think we have the luxury of resting some players. I would consider resting Dak for an additional week. It’s likely we can beat the lowly Broncos with Rush under center. Would for sure rest T Smith for at least a week, if not more. Also gives those backups valuable experience in the event they are called upon at other points in the season.

No need to rest him an additional week. He would’ve played Sunday if it was a game of huge significance. He was clearly moving fine in warmups. He feels right, he plays Sunday, period. Also, can’t just assume Rush can beat the Broncos and Falcons. Counting wins in the NFL before games are played isn’t smart

Why isn’t anyone talking about the Smith choking Ceedee in this game?????

I noticed that CeeDee was being choked out as well

Matthew- I realize he looked good in pregame warmups, however warmups are much different then actual live action- where the conditions are not controlled, bodies are flying all around him and he will have to making unnatural and/or sudden movements. Likely the cowboys are being extra cautious, but they were concerned enough to hold him out of the game.

Not saying he should be held out, but the cowboys are playing the long game, so it’s something I would at least consider. Do we really know how serious his calf injury is?

It’s not anything to consider. If he’s a full go in practice he’s playing. Jerry even said he expects him to play. He has no limitations in workouts. He’s playing, period

He was a full go with no limitations before the last game too. Jerry is the last person I listen to when it comes to team matters. He looks at everything thru cowboy goggles. If I recall he was pretty optimistic Dak would play against the Vikings as well.

He didn’t even take first team reps in team drills so how was he a full go? If he’s a full go in practice he’s playing

Why push the envelope with CR again. We got a few good breaks in Vikings game, (that fumble negated by a penalty, that pass right at a defender that bounced around and finally corraled by AC, ETC. The defense rose to the occasion and IMO they played a MAJOR PART IN THE WIN. Assuming we all saw the first half of that game, it’s hard to say CR played well. In fact he played rather badly, missing targets, making would-be INT throws. Second half he was better and he did make the clutch TD throw. I give him credit for that, and I’m very happy we won the game. But..

If DP is good to go, why roll the dice with CR AGAIN. I’m not ready to crown CR a solid QB2 just yet. ONE regular season game win is clearly not enough of a sample size. I know he had his moments in PS. But that’s PS. Why go with your QB2 when your QB1 is healthy.

If it’s against the Broncos or not, put your best healthy players on the field. And DP is deemed healthy. Now if it’s the end of the season, and the game is meaningless, sure sit out players, but it’s obviously not the end of the season now and ALL games/wins matter. YOU DON’T PAY A HEALTY DP $40 MILLION/YR TO STAND ON THE SIDELINE. Just my take. Respect other opinions. 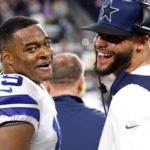 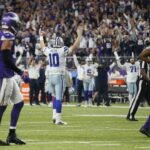