The Dallas Cowboys will have their second NFC East matchup in the first two weeks of the season this Sunday on the road against the Washington Redskins. It’s very important that the Cowboys build off the momentum they gained in their blowout season-opening win against the New York Giants. This could be your classic “Trap Game” as it’s often referred to when a superior team doesn’t play well and suffers a loss to an inferior opponent. Luckily, the Cowboys have two players on offense that have performed well against Washington in Dak Prescott and All-Pro Ezekiel Elliott. Doing so again this Sunday could very well get the team off to a 2-0 start. 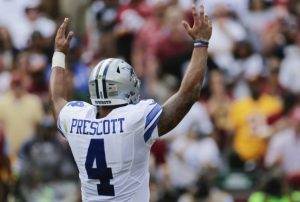 Dak Prescott knows all too well about winning big division games on the road against the Redskins. In his rookie season, he was coming off a loss in his NFL debut versus the New York Giants as the Cowboys were trying to avoid an early 0-2 start. Prescott responded going 22 of 30 for 292 yards as the Cowboys won a tough 27-23 slugfest. Later that season, he didn’t put up monster numbers with 195 yards but the team would sweep the Redskins with their 31-26 victory in Arlington. Prescott had 487 yards and completed over 72% of his passes against the Redskins as a rookie.

In 2017,  Prescott’s numbers versus Washington weren’t impressive but they didn’t have to be. The Cowboys dominated the Redskins winning each game by an average of 19 points. He did, however, throw two touchdowns with no interceptions. 2018 was Prescott’s best statistical season in this rivalry. Even though he suffered his one and only loss to the Redskins he averaged 281 yards per game and threw three more touchdowns without an interception.

In total, Prescott is 5-1 with 6 touchdown passes and no interceptions completing 65.8% of his passes against the Redskins for his career. He’ll have added motivation to play well this Sunday due to the recent comments by Redskins Cornerback Josh Norman. “You stand back there in the pocket all day and go through your first, second and third reads and come back to your first one, ok, cool. Anybody can do that,” Norman said to the Associated Press. More fuel to the fire for this Sunday. 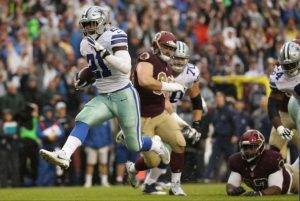 Ezekiel Elliott used his first game against the Redskins in 2016 to springboard his way to his first of two rushing titles. After a lackluster 51 yards in his career debut, Elliott ran for 83 yards and a touchdown in Washington as the Cowboys edged out a four-point win. He followed it up with a 97-yard performance at home in a close five-point victory.

He would only play the Redskins once in 2017 because of the six-game suspension he served for domestic violence accusations. He made that one opportunity count, though, as he ran for 150 yards on 33 carries in a rather easy 33-19 win on the road. His only pedestrian performance in this rivalry came in Washington last season when Elliott only had 33 yards on 15 carries in a three-point loss. However, he followed it up with a 121-yard performance at home in a tough 31-23 win.

Elliott has more rushing yards (484) and more rushing touchdowns (6) against the Redskins than any team he’s faced so far in his career. Also, he averages an amazing 96.8 yards per game in this matchup. The All-Pro is also ready for his normal workload after knocking off the rust from his holdout in last week’s season opener.

“I think I’m ready now for a normal workload,” Elliott told ESPN’s Todd Archer on Wednesday. “Just depends on how (running backs coach Gary Brown) and (offensive coordinator) Kellen (Moore) and Coach (Jason) Garrett are feeling on Sunday. But if they ask me, I’ll be able to go out there and do it.”

Prescott and Elliott are looking to continue their success against one of their most bitter division rivals. The Cowboys don’t want any letdowns during this “easy” part of their schedule. Big performances from their two most important offensive weapons will be key on Sunday.