Dak Prescott left practice on Thursday after discomfort in his surgically-repaired right ankle. Doing so, of course, resulted in him being listed as limited on the injury report. Still, he says he is fine and will have no limitations on Sunday when the Tampa Bay Buccaneers come to town.

Prescott entered training camp in the healthiest and best shape of his life. He said his foot was uncomfortable in his new Air Jordan 11s he was thinking about wearing on Sunday. Prescott has been wearing Jordan 1s throughout training camp and plans to return to them. “Switching shoes today probably wasn't the best idea. There we go. We're good to go. I promise you I'm great,” Prescott said.

Head Coach Mike McCarthy said Prescott would be a full participant Friday and Saturday. “I don't have any concerns,” he said. Here we go again, the media blowing these things out of proportion.

Cowboys coach Mike McCarthy on QB Dak Prescott (shoe): “He’s going to be a full participant today. I anticipate he’ll be the same tomorrow, so I don’t have any concern” for Sunday. Asked if Prescott had MRI, McCarthy said only that team “checked him out” and determined he’s fine. pic.twitter.com/nCPuJgx9pX

“I feel great. I still feel the best that I've felt in a very, very long time,” Prescott said. “Not even comparable to where I was last year going into this game. So, honestly just excited and ready for Sunday to get here.” Prescott threw 403 yards and three touchdowns in the season opener a year ago, coming off that injury the season before with no preseason or much of training camp to help him out.

Cowboys QB Dak Prescott (ankle) was limited in practice today. Will show up on injury report, but he insists issue is minor. Discomfort from shoe switch. “I feel great. I still feel the best that I’ve felt in a very, very long time. …I’m good to go. I promise you.”

Let's all relax and pump the brakes. Prescott is fine. Time will tell, but just because he was uncomfortable and needed to take them off and leave does not mean he did anything more to his ankle. I would be just as cautious if I were in his situation, and we all know how it went during the 2020 season when he missed eleven games, not well. He will practice today and tomorrow and play on Sunday, so let's see how all of this goes and then we can revisit this and see if people still want to freak out for no reason.

I remember seeing on a cold Jan. 2 day in 1994, Cowboys great HOF RB Emmitt Smith playing in a game against the Giants in the Meadowlands. Giants were a good team then with QB Phil Simms and LB Lawrence Taylor, et al.

Cowboys led early in the game, 13-0, then with about 2 minutes left in the first half, Smith’s shoulder separated on a brutal tackle. Knowing this was the game the Cowboys needed to secure a home playoff game, Smith begged the trainers to get him back on the field. He couldn’t lift his right arm above his chest, so the trainers taped it up and covered the shoulder with extra padding and he got back into the fight. Giants tied the score in the second half 13-13, and game went to into Overtime.

On the day, Emmitt, playing with basically one arm much of the game, carried the ball 32 times for 168 yards and had another 61 yards on 10 receptions, for a total of 229 incredible yards, AND touching the ball on nine of 12 plays on the game winning drive in Overtime, including the final five. He was Herculean that day, playing through tremendous pain, and Giants didn’t go lightly on him, drilling him when they could. He was a warrior! He was GREAT

And now players get headlines for “discomfort” from a shoe. No disrespect to Shane, b/c it seems like a different game now, and not for the better, IMO. It used to be about TEAM and WINS. Sadly, now it seems, at least for some of these players (not saying all), more about the money, and individual stats for building a “brand” to get endorsements and maybe TV gigs down the road. 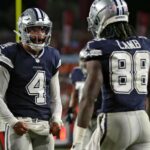