With the Dallas Cowboys (7-5) set to take on the hated Philadelphia Eagles (6-6) in an important divisional game, you knew that their would be some tension as the teams battle for first place in the division. Well, Eagles Linebacker Kamu Grugier-Hill set it off with some comments yesterday when speaking to the media. Dak Prescott had his own response today.

From NBC Sports in Philadelphia, you can hear what Grugier-Hill had to say.

The Dallas Cowboys have been relatively quiet this week when discussing the Philadelphia Eagles as they continue to focus on themselves and getting better each day. Prescott, when asked about the comments Grugier-Hill made about the Cowboys, he first responded with, “Who?” He then had this to say…

“You know, coach (Jason) Garrett has a great saying, and I don't know where he got it from, but winners worry about winning and losers worry about winners,” Prescott said. “We're focused on ourselves in this locker room about what we need to do to get better in each and every phase of this game to be ready for this week.We're not worried about he say, she say.”

The Dallas Cowboys are on a four game winning streak and have the NFC East right in front of them and know that if they take care of business this Sunday, their journey into the tournament will be made that much easier.

As always, the Philadelphia Eagles will pose a challenge to the Dallas Cowboys on both sides of the football. They have some really good players in their front seven on defense, even though they haven't been playing well this season and their offense has playmakers at tight end and wide receiver that will challenge the Cowboys defense yet again. The Eagles may have flaws, but they are a team that can be a buzz-kill on this playoff train we're riding.

If you want to see Jason Garrett's imprint on this team, just listen to Dak talk. He and the Dallas Cowboys aren't worried about anyone other than themselves. With the NFC East in the balance, the Cowboys are focused on taking another step toward clinching their division and making the playoffs for the third time in five seasons. 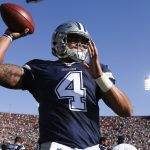 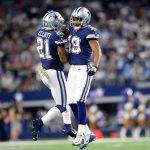