All NFL teams trimmed their rosters down to 53 players yesterday, with plenty of action still in the works as the waiver process, trades, and other potential moves play out. The Dallas Cowboys' 2019 roster as of this moment may be different this time tomorrow, but let's stop and just take stock of what the team's done so far.

As you go through my thoughts and reactions, the following links may prove useful:

As you can see from the projection I linked above, so far I was right on 48 of the 53 picks. I say “so far” because a couple of additional moves could be coming that will improve my accuracy.

Right now Dallas is carrying a few injured players on their current roster. It is expected that at least two of them will be placed on injured reserve today or tomorrow, with the ability to return after Week 8 since they were on the initial 53-man roster:

Given their health issues and recovery timetables, Gifford and McGovern should be headed to IR shortly. That will open up two roster spots for Dallas to add talent from other teams' cuts, or perhaps bring back a couple of their own players who were cut yesterday.

If the rumors are true about a contract agreement coming soon between RB Ezekiel Elliott and the Cowboys, one of those open spots will be his. Right now Zeke doesn't count against the 53-man roster limit as he never reported to training camp, but that will change if a contract is worked out sometime in the next 24-48 hours.

As for the other spot, if Dallas doesn't add a fresh face from another team, I expect that will go to preseason standout LB Justin Phillips. Putting Gifford on IR would bring the Cowboys down to just five linebackers, and that's very thin given their use on special teams and the injury risk with Sean Lee.

Beyond those decisions, what else was surprising or notable from Dallas' moves yesterday and what more could we see happen?

Understanding there is some strategy I am not party to, I think it was a mistake to let Cedric Wilson go. He was developing as well as Smith and with Smith’s knees, going with 5 WR seems dangerous. Maybe they think Wilson will clear waivers, but I highly doubt that.

But they did keep Noah Brown, the Cowboys put him on the PUP list…

CW did clear waivers so there is that at least.

Well I am already sick of the Ezekiel Elliott soap opera. Yesterday everyone was all “giddy” because Dallas and Zeke were very close to “hammering” out a new deal for the crybaby, and now we’re hearing that there is still significant ground to be covered before a new contract is reached. Give me a break!! Is he going to be with the team or not, he needs to make a damn decision, and stop playing high school games. Personally I say let him sit down there in Cabo. He’ll get bored and decide to come back to work

Spoiled baby. Cut his ass. Then he can follow Demarco Murray’s footsteps and go somewhere else and suck.

Don’t cut him, just let him sit. He doesn’t take a roster spot as long as he holds out and he doesn’t cost any money. He loses leverage if he sits and doesn’t accrue a season. Plus he has trade value.

Get a life. The man is doing whats best for him and his future. He’s got a life after football. This not high school and college this is a job.

I have a job that is why I haven’t answered your stupid ass before now. You must be some one who thinks it’s ok to just walk out on a job commitment. Hey stupid he was still UNDER CONTRACT!!!!!
what a dumb ass you are 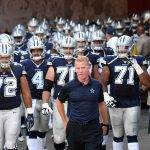 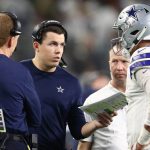