Dallas Cowboys at Seattle Seahawks: Inside The Numbers

The Dallas Cowboys will travel to the Pacific Northwest this weekend to face the Seattle Seahawks in an important game for both teams in the NFC race.

The Seattle Seahawks are 0-2 and risk being buried in an NFC West that has seen the Los Angeles Rams become the divisional power. With the San Francisco 49ers trending up, the Seahawks might find themselves left behind. On Monday Night Football, Russell Wilson and the Seahawks had little answers for a Chicago Bears team that has one of the more underrated defenses in the NFL. Well, maybe not so underrated now. They battered Wilson and the Seahawks offensive line for six sacks and were able to pressure him into an interception they were able to return for a touchdown.

The Dallas Cowboys rebounded from a week one disappointment to take care of business against the New York Giants on Sunday Night Football. It wasn't a pretty win on offense, save for the first and last drives of the game, but it was a solid win. The defense dominated the New York Giants' offensive line and left them searching for answers at 0-2.

As we get ready for week three let's go Inside The Numbers for yet another important matchup for the Dallas Cowboys.

The Dallas Cowboys lead the all-time series 10-8, but have dropped the last two matchups and are 2-3 over the last five games. They've split the last two meetings that played in Seattle, winning the most recent showdown in 2014, 30-23.

If you'll remember, that was the game that had us all believing that Tony Romo and DeMarco Murray led Cowboys team was for real. Sadly the 2014 season ended with the typical heartbreak that we've grown accustomed to in the last 23 years.

Let's take a look at how the matchup breaks down on the offensive and defensive sides of the ball.

The Dallas Cowboys and the Seattle Seahawks offenses are eerily similar statistically as both rank near the bottom in most offensive categories. 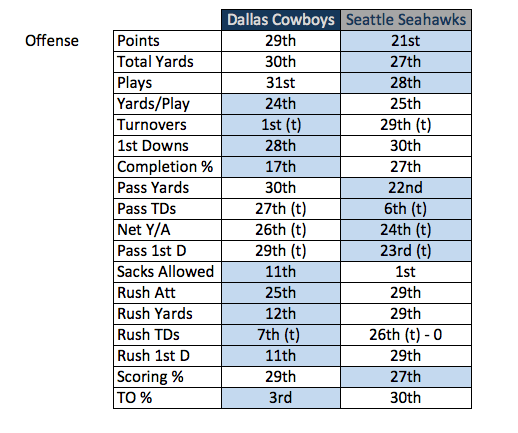 As you can see from the chart above, there aren't many categories where either team ranks inside the top 20 in total offense.

It's on the defensive side of the ball where the Dallas Cowboys have a decided advantage, particularly with their pass rush. 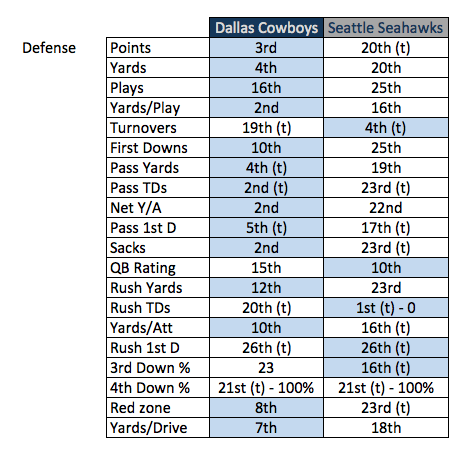 As you can see, the Dallas Cowboys have the statistical edge in nearly every category.

What it All Means

The Dallas Cowboys are going to have a pretty difficult challenge corralling Seahawks' Quarterback Russell Wilson, but the numbers seem to point to it being a long afternoon for Wilson.

The Seattle Seahawks won't be able to rely on their running game to keep the Dallas Cowboys defense off balance as they only average 3.4 yards per carry through the first two weeks of the season. If the Cowboys can get an early lead this Sunday, it will present a really favorable opportunity for the Dallas Cowboys pass rush.

Dak Prescott hasn't thrown an interception this season. If we can make any observations through two games, it's that he seems to be back to his ball protection ways. As a rookie, Prescott only through four interceptions, before doubling that in 2017 with eight.

Cole Beasley and Deonte Thompson are tied for 27th in the NFL in yards per route run. That number is better than Stefon Diggs of the Minnesota Vikings, Golden Tate of the Detroit Lions, Davante Adams of the Green Bay Packers, and Antonio Brown of the Pittsburgh Steelers.

The Seattle Seahawks have had a hard time getting to opposing passers and have collected only three sacks through the NFL's first two weeks. Prescott was sacked six times in week one, but the Dallas Cowboys offensive line rebounded to keep the New York Giants from collecting a sack in week two.

Tyler Lockett has played 53 of his 79 offensive snaps from the slot, but has only been targeted four times, catching four passes for 85 yards. His 1.60 yards per route run out of the slot is tied for 11th in the NFL among players who have played at least 50% of their snaps from the slot.

Seattle Defensive Lineman Jarran Reed has been the best run defender for the Seahawks, earning a run stop on 13.5% of his run snaps. Overall he sits eighth in the NFL. Among defensive lineman with at least 50% of their team's run snaps, only Da'Shawn Hand and Linval Joseph have a better run stop percentage.

The amount of snaps per reception allowed by Dallas Cowboys Cornerback Anthony Brown. No player who has played at least 50% of his coverage snaps in the slot has a higher snap per reception rate in the NFL than Brown's 19.

According to Pro Football Focus, Wilson's been sacked on 36.4% of his drop backs this season. Only Ryan Tannehill and Nathan Peterman have a worse percentage of players who have dropped back to pass a minimum of 22 times this season.

Wilson's been under pressure on 38.8% of his drop backs, which is sixth in the NFL.

As I look at the run down for this game and after watching these two teams in week two, I see this as a very favorable matchup for the Dallas Cowboys. Obviously, statistics don't tell the whole story, but the Dallas Cowboys biggest strength, it's pass rush, will be facing a Seattle team that is very weak along the offensive line.

This looks to be a Dallas Cowboys win that will improve them to 2-1.

John Williamshttps://anchor.fm/inside-the-cowboys
Dallas Cowboys optimist bringing factual, reasonable takes to Cowboys Nation and the NFL Community. I wasn't always a Cowboys fan, but I got here as quick as I could. Make sure you check out the Inside The Cowboys Podcast featuring John Williams and other analysts following America's Team.
Previous articleCowboys Defense is Ready to Win Now, Time for Offense to Prove the Same
Next articleCowboys Reunion with WR Brice Butler Makes No Sense