The Dallas Cowboys are facing off against the Washington Football Team this Sunday. It should be a fun divisional contest and one that will go a long way in deciding the NFC East. There are a lot of intriguing match-ups in this game in real life and for fantasy purposes.

Will Trevon Diggs get the best of Terry McLaurin?

Will the Cowboys rush defense come to play?

Can Dak rebound and dissect a suspect Washington secondary?

All these questions will go a long way in determining the outcome of the game and many DraftKings contests. This is going to be an incredible showdown slate with many viable plays. Let's look at some options.

Gibson has also been getting burn in the passing game with 13 total targets the past two games.

The Dallas defense has struggled a bit against the run lately, giving up 715 yards on the ground at a 4.7 yards per carry rate over the past five games. Admittedly, a big chunk of that was Taysom Hill from the QB position a week ago, but Dallas has still given up over 600 plus rushing yards in the last five games if you take away Hill's totals.

Dallas also has given up the second most 20 plus yard runs on the season and sports the 19th rated rush defense in terms of DVOA. Combine Gibson's usage and a suspect Dallas rush defense rostering Gibson is a no-brainer, and utilizing him as your captain instead of CeeDee Lamb, Dak Prescott, or Terry McLaurin saves some much-needed dollars.

WR Amari Cooper ($12,900) ­– Amari Cooper returned against the New Orleans Saints last week but only played in 24 of 70 snaps. Amari Cooper is seemingly finally back to full strength, and that snap count will go way up this week. Cooper is another great pay-down play at the captain spot.

Washington has given up the fourth-most passing yards on the season and the most passing touchdowns tied with the Indianapolis Colts with 26.

Combine that with the fact that Washington's defense is very stout against the run, ranking third in the NFL in rushing yards per game allowed, the way to victory for Dallas will be through the air. Cooper may be a steal at this price.

QB Dak Prescott ($10,400) ­– Dak Prescott has been slumping lately. He's scored fewer than 13 DraftKings points in two of his last four starts, with one of those games scoring a grotesque 5.6 points. However, if Prescott ever had a get-right game, this would be the game.

The Washington defense is the 32nd ranked team in DraftKings Points allowed to quarterbacks. That's dead last, folks. The Football Team also is ranked 31st in quarterback ranking against with a ranking of 105.0.

The Washington defense happens to be at the league's bottom in several other key passing metrics, including passing yards per game allowed, passing yards per attempt, completion percentage, and finally passing touchdowns allowed.

Prescott has no excuses this week and should thrive in the match-up. Don't get cute and leave him off your showdown slate.

WR Terry McLaurin ($9,000) – Terry McLaurin is the far and away number one passing option for Washington, with the recent injury to Logan Thomas even more so now. McLaurin has only had seven receptions combined the past two games, but he is still getting his targets. There have only been two games where McLaurin hasn't received seven targets this season.

The Cowboys' defense is ranked 26th in DraftKings points allowed to to wide receivers. Dallas has also allowed the sixth-most passing yards in the NFL and the fourth-most 20 plus yards passes in the NFL.

In a game where Washington may have to pass more than usual to keep up with Dallas, McLaurin should be looked towards early and often.

TE Ricky Seals-Jones ($4,400) – The Logan Thomas injury is devastating for Washington fans. The fantasy community, as a result, will get a nice value play. Ricky Seals-Jones, who has missed the last three games, has been cleared to play this Sunday.

In the games that Thomas missed with injury earlier in the season, Seals-Jones wasn't spectacular, but he was getting targets. He never had less than four targets in a game he started this season and had a high of nine. Opportunity is everything in fantasy, and a five-catch 50-yard game is not out of the question.

WR DeAndre Carter ($1,400) – DeAndre Carter is a huge question mark. He is coming off a one-catch game. However, he has started four of the past five games and has two touchdowns in that span. Carter has also scored nine or more points in three of his last five games.

It's always stress-inducing to rely on these punt plays, but Carter needs to do very little to return value at this price tag and allows a lot of flexibility for the rest of your roster.

Side note: Keep an eye on J.D. McKissic's injury. He is currently listed as questionable, but his third-down pass-catching role could prove helpful in this game if he does suit up. 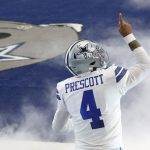 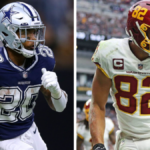