The Dallas Cowboys have completed the majority of their 30 pre-draft visits, providing insight into where the team will look to improve for 2018 at the upcoming NFL Draft. Noticeably absent from this list is UTEP prospect Will Hernandez, one of the best guards available in this class.

The Cowboys are entering the first round of the draft with a big need at left guard, straying from their recent and proven approach of filling holes in free agency to truly draft the best players available.

Starting last year between Tyron Smith and Travis Frederick was Jonathan Cooper, who opted to sign with the San Francisco 49ers this offseason.

In an effort to “replace” Cooper, the Cowboys added FA Marcus Martin. Fortunately, the Cowboys do not have to play a game tomorrow, but if they did you would likely see the fifth-year pro in Martin at left guard.

That is, if the Cowboys have learned their lesson on the dreaded “position flex” up front, putting an end to Chaz Green's time at guard and allowing La'el Collins to continue developing at right tackle. 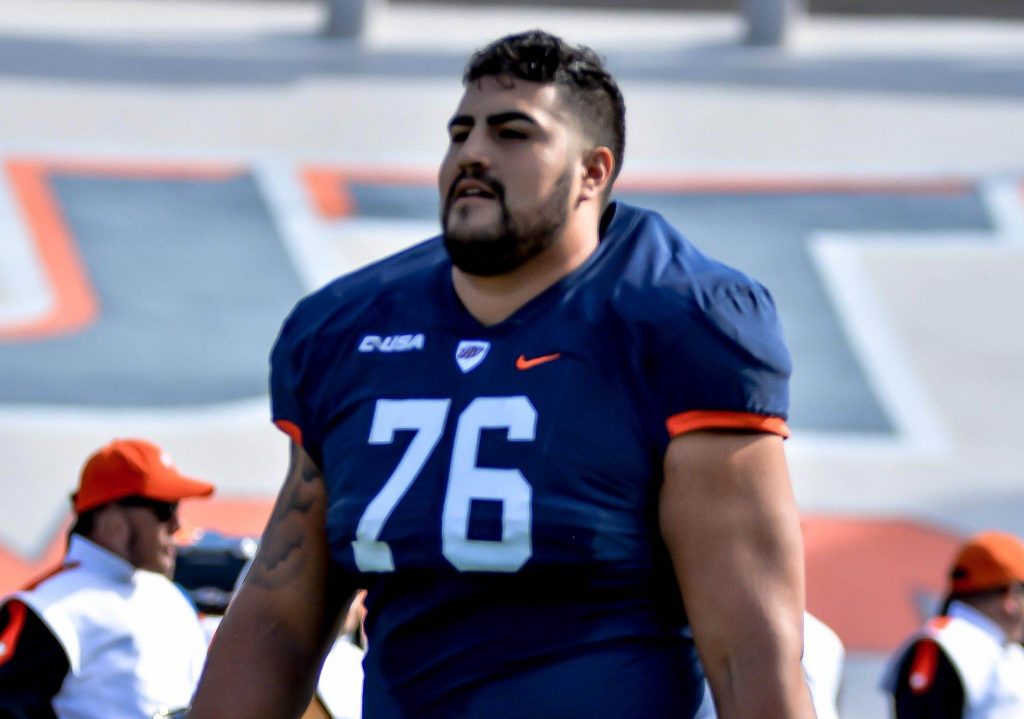 The Cowboys' uncertainty at left guard has prompted many to call for a reinvestment at the position with another first round pick, where Will Hernandez would make a ton of sense. Few jobs in football may be currently easier than blocking between Smith and Frederick in Dallas, paving the way for Ezekiel Elliott to once again take the league by storm in 2018 while also protecting franchise QB Dak Prescott.

These are all roles that Will Hernandez should understand well, even without stepping foot inside The Star for a formal visit with the Cowboys. The mammoth of an offensive lineman shares an agent with Tyron Smith and Travis Frederick, and has been seen with both potential-teammates this offseason.

Just for what it's worth: Tyron Smith, Travis Frederick, and Will Hernandez all have the same agent.

This will undoubtedly make the Cowboys more comfortable about their evaluation of Hernandez, who is also one of the cleanest prospects in the 2018 NFL Draft. Will Hernandez will be a plug and play starter at either guard position in his first season with any team, overpowering his opponents with a square but athletic frame and punishing technique.

With ten total selections in this draft, it is imperative that the Dallas Cowboys hit on the 19th overall pick to set the tone from their own stadium that this team will draft its way back into contention this season. The Cowboys are certainly not far off from doing so just given the caliber of players they'll welcome back from injury in 2018.

Huge blessing being surrounded by players like this 👊🏽👊🏽 pic.twitter.com/LlSJ07Pwqt

On paper, the Cowboys will be a much better team in just a few short weeks. Should Will Hernandez be their latest addition to a star-studded offensive line, they may also be the most “can't miss” offense in football – adding the personnel to absolutely dominate teams on the ground physically for four quarters.

Simply put, Will Hernandez factors directly into the Cowboys' path towards playing a patented style of football that's garnered results in recent seasons. In a big way (literally), the local UTEP prospect should make everyone forget about the team's current shuffling at left guard if his name is called on April 27th by the Cowboys.

It is an honor to announce that I will be attending the 2018 NFL Draft from AT&T Stadium, covering all of the action right here at Inside The Star. As always, we are greatly looking forward to bringing you coverage of this fantastic three-day event, and I could not be more excited personally to complete my first trip to Dallas and hopefully provide the type of coverage that Cowboys Nation can be proud of!

The Dallas Cowboys have suffered some tough blows to the interior offensive line in recent years. Will recent investments in the guard and center...
Read more